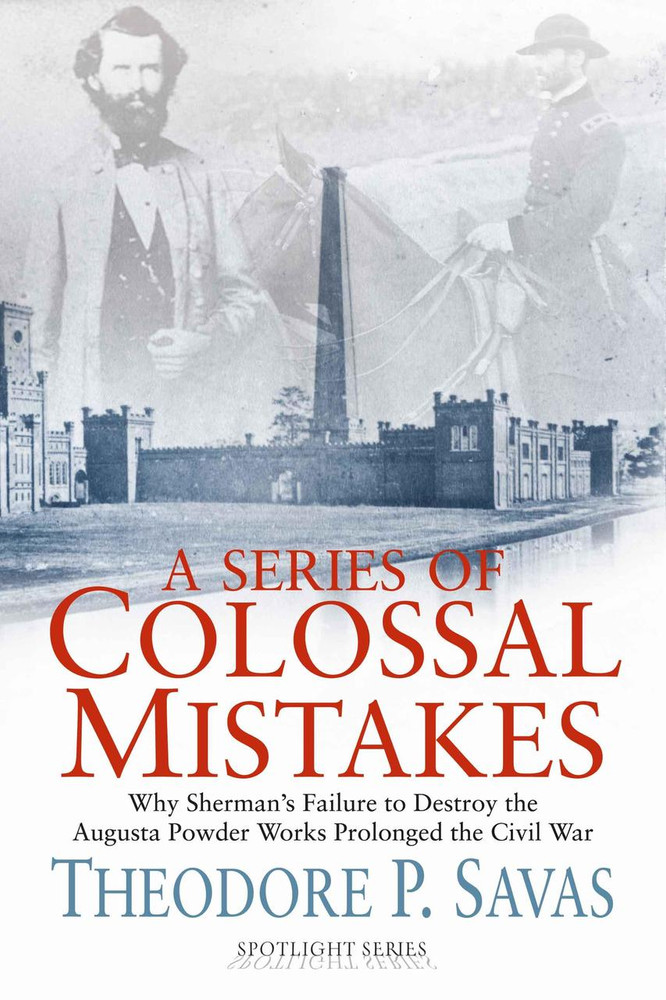 A Series of Colossal Mistakes: Why Sherman's Failure to Destroy the Augusta Powder Works Prolonged the Civil War

This study is only available as an e-Book. We will provide the link to Kindle, etc. as it comes available(on or about Oct. 1).

Few students of the Civil War realize that almost all of the South’s gunpowder was produced at a single location in Augusta, Georgia. The large and impressive facility made thousands of pounds each day. If it was captured or destroyed, the war would necessarily end within eight to ten weeks because there was no way to replace the gunpowder. For reasons that remain nearly impossible to understand, the Federal high command never made it a top priority for destruction, and one Union general who could have easily destroyed it left it standing. The world’s leading expert on the facility, Theodore P. Savas, explains the construction, operation, and importance of the facility, and the Union failure to eliminate it, in A Series of Colossal Mistakes: Why Sherman's Failure to Destroy the Augusta Powder Works Prolonged the Civil War.

The Augusta works began operation in April 1862. From that moment until the last shot was fired, it was the single-most important military industry in the world. The Confederate high command considered the mammoth operation organized, built, and operated by Col. George Washington Rains to be quite safe in Georgia because it was deep inside its own territory. In reality, there was no place within the Confederacy to safely erect such an important operation, a fact that became painfully obvious when Gen. William T. Sherman invaded Georgia in the spring of 1864. Even though he was fully aware of its importance to the Southern war effort—and had complete discretion to capture or level the place—the Union army commander decided instead to ignore the facility on at least three separate occasions while invading Atlanta, marching to the sea, and moving north into the Carolinas. Unbeknownst to Sherman and the Lincoln administration, except for relatively brief pause, the Augusta facility continued producing and shipping tons of gunpowder and other war materiel until weeks after Lee surrendered at Appomattox—even with many of the railroads destroyed.

This is not alternate “what-if” history. Savas uses indisputable records and facts to conclusively demonstrate that Sherman’s conscious choices during the Atlanta Campaign and thereafter prolonged the war for many months because he made the wrong strategic decision three times in a row. Instead of making the move that would have ended the war almost immediately, Sherman remained in character and maneuvered instead of taking decisive action. The result was the unnecessary death and maiming of tens of thousands of men and civilians. Although the records have always been available, no other historians or writers who have studied these campaigns discuss or even understand the overarching importance of the powderworks, and most do not even mention them.

The truth is that history is complicated, but prior writers have taken the easy way out in evaluating Sherman in Georgia. He could have easily destroyed the Works. There was no need to fight all the way to Atlanta and then invest the city for bloody weeks on end. The fall of the works would have made waging war absolutely impossible within a short period of time.

A Series of Colossal Mistakes, a new essay in the Savas Beatie Spotlight Series, may or may not convince you that Sherman made several egregious strategic blunders, but you will never again read about these campaigns without taking his decision-making into mind."

Theodore P. Savas graduated from The University of Iowa College of Law in 1986 (With Distinction). He practiced law in Silicon Valley for many years, and taught business and history classes at the college level for about 20 years. In 1990, he co-founded with David Woodbury the historical press Savas Woodbury Publishers (later Savas Publishing). The company was sold to an East coast publisher in 2001, and founded, with Russel H. Beatie the historical press Savas Beatie in 2004. Savas is the author or editor of fourteen books (published in six languages), including A Guide to the Battles of the American Revolution (with J. David Dameron, Spellmount and SBLLC, 2006), Hunt and Kill: U-505 and the U-Boat War in the Atlantic (Spellmount, SBLLC, 2004), Silent Hunters: German U-boat Commanders of World War II (Campbell, 1997; Naval Institute Press, 2003) and Nazi Millionaires: The Allied Search for Hidden SS Gold (Casemate, 2002), as well as scores of articles in a variety of journals, magazines, and newspapers. His hobbies include scuba diving, smoking good cigars, and playing bass and keyboards in the hard rock band Arminius.