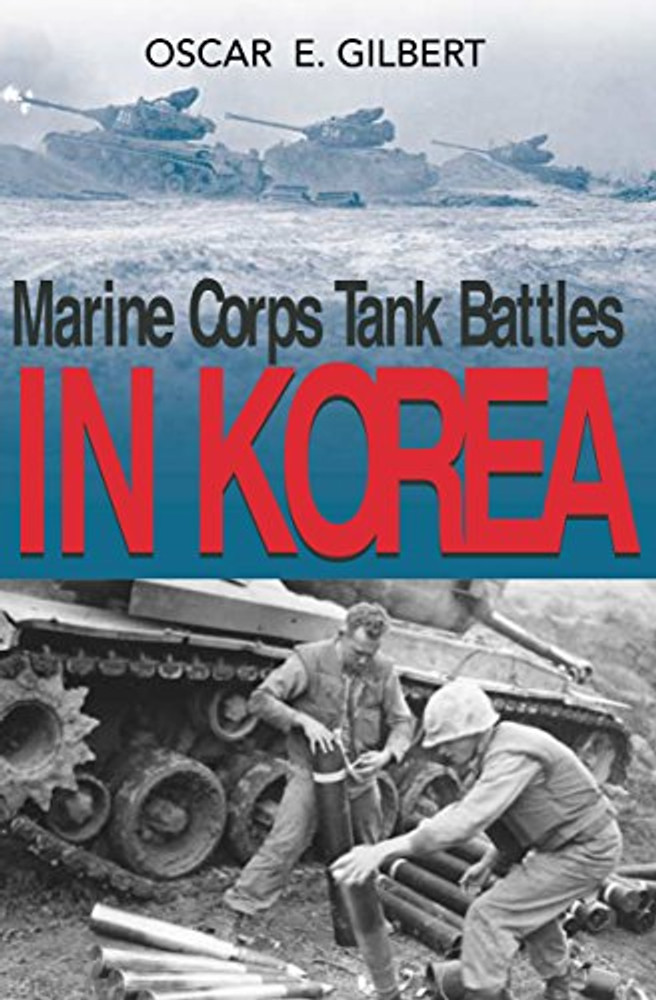 An award-winning military historian delivers “an excellent read” on tank combat in the Forgotten War based on interviews with veterans who were there (MAFVA.org).

The outbreak of the Korean conflict caught America (and the Marine Corps) unprepared. The Corps' salvation was the existence of its Organized Reserve (an organization rich in veterans of the fighting in World War II), the availability of modern equipment in storage and, as always, the bravery, initiative, and adaptability of individual Marines.

In this follow-up to his enormously successful Marine Tank Battles in the Pacific, Oscar Gilbert presents an equally exhaustive and detailed account of the little-known Marine tank engagements in Korea, supported by forty-eight photographs, eight original maps, and dozens of survivor interviews.

Marine Corps Tank Battles in Korea details every action, from the valiant defense at Pusan and the bitter battles of the Chosin Reservoir, to the grinding and bloody stalemate along the Jamestown Line. Many of these stories are presented here for the first time, such as the unique role played by tanks in the destruction of the ill-fated Task Force Drysdale, how Marine armor played a key role in the defense of Hagaru, and how a lone tank made it to Yudamni and then led the breakout across the high Toktong Pass.

Marine tankers—individually and as an organization—met every challenge posed by this vicious, protracted, and forgotten war. It is a story of bravery and fortitude you will never forget.

"In order to produce this fine book, the author has conducted extensive interviews with participants and consulted archival and published materials. This gives the book an excellent balance between the events as witnessed by the participants and the broader historic, strategic and tactical issues. It also makes for a great reading experience. The text is full of excellent “war stories” and covers a wide variety of combat and non-combat scenarios....You’ll not be disappointed. Highly recommended."
TRACK-LINK

“If you're interested in The Korean War, Tanks, or the US Marine Corps, this is an interesting book on an interesting subject that should give you some hours of entertainment, and remain on hand as a reference for the modeller or historian. Korea has for too long been called the forgotten war, and these USMC tankers probably forgotten more than most. Highly Recommended.”
Britmodeller

“An excellent read which fills a gap on my bookshelves. Recommended.”
Scale Military Modeller International

Oscar E. "Ed" Gilbert Jr. is a native of Alabama, with B.S. and M.S. degrees in geology from The University of Alabama, and a Ph.D. in geology from The University of Tennessee. He was a Marine Corps artilleryman and NCO instructor in the Marine Corps Reserve. After early work in government service, minerals exploration, and university teaching, Ed retired after twenty-eight years in domestic and international petroleum exploration, primarily in Southeast Asia, the Middle East, sub-Saharan Africa, southern Asia, and Latin America. Ed was presented the Marine Corps Heritage Foundation's 2016 General Wallace M. Greene Jr. Award for outstanding non-fiction for "Tanks In Hell: A Marine Corps Tank Company On Tarawa". He also holds the non-profit Presidential Service Center's Distinguished Service Medal for "Patriot Militiaman In The American Revolution 1775-82" and "True For The Cause Of Liberty: The Second Spartan Regiment In The American Revolution." As a military historian, Ed has also written for veterans', historical, and hobby magazines, and served as a technical and historical advisor on film and television projects. He has appeared on CNN, and several episodes of the cable television series Greatest Tank Battles. His primary interests are the history of the US Marine Corps, and the state militias in the American War of Independence, the Red Stick War (Creek War of 1813 - 1814), and the War of 1812. The emphasis of his work is on understanding military history from the bottom up, the personal experiences of enlisted men and junior officers too often ignored in history books.