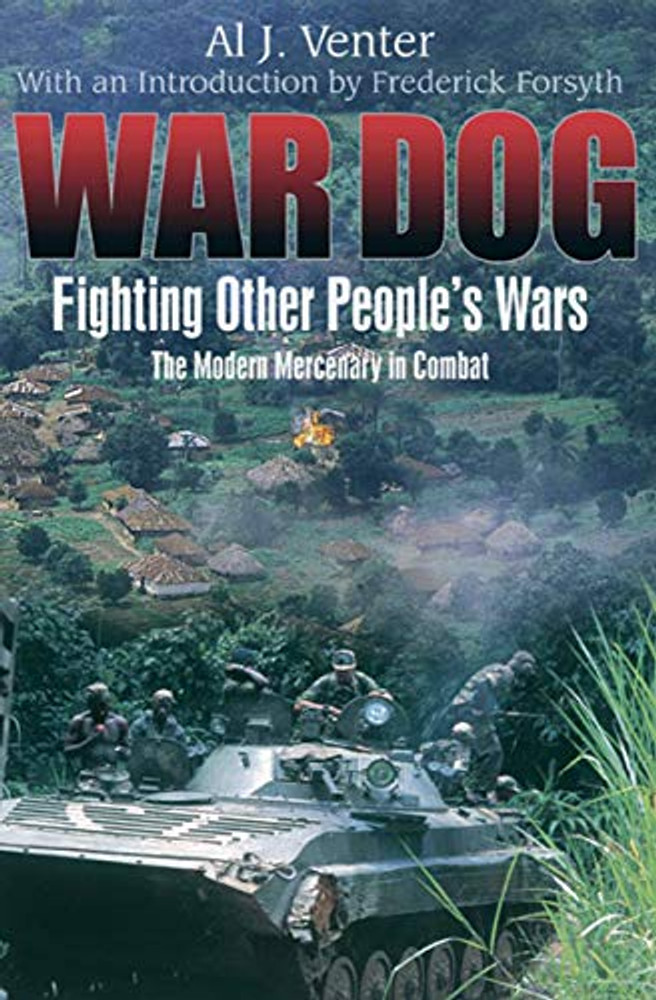 Your very own Theodore P. Savas helped this real mercenary write his book.

Mercenaries have been with us since the dawn of civilization, yet in the modern world they are little understood. While many of today's freelance fighters provide support for larger military establishments, others wage war where the great powers refuse to tread. In War Dog, Al Venter examines the latter world of mercenary fighters effecting decisions by themselves. In the process he unveils a remarkable array of close-quarters combat action.

Having personally visited every locale he describes throughout Africa and the Middle East, Venter is the rare correspondent who had to carry an AK-47 in his research along with his notebook and camera. To him, covering mercenary actions meant accompanying the men into the thick of combat. During Sierra Leone's civil war, he flew in the front bubble of the government's lone Hind gunship-piloted by the heroic chopper ace "Nellis"-as it flew daily missions to blast apart rebel positions. In this book the author not only describes the battles of the legendary South African mercenary company Executive Outcomes, he knew the founders personally and joined them on a number of actions. After stemming the tide of Jonas Savimbi's UNITA army in Angola (an outfit many of the SA operators had previously trained), Executive Outcomes headed north to hold back vicious rebels in West Africa.

This book is not only about triumph against adversity but also losses, as Venter relates the death and subsequent cannibalistic fate of his American friend, Bob MacKenzie, in Sierra Leone. Here we see the plight of thousands of civilians fleeing from homicidal jungle warriors, as well as the professionalism of the mercenaries who fought back with one hand and attempted to train government troops with the other, in hopes that they would someday be able to stand on their own.

The American public, as well as its military, largely sidestepped the horrific conflicts that embroiled Africa during the past two decades. But as Venter informs us, there were indeed small numbers of professional fighters on the ground, defending civilians and attempting to conjure order from chaos. In the process their heroism went unrecorded and their combat skill became known only to each other.

In this book we gain an intimate glimpse of this modern breed of warrior in combat. Not laden with medals, ribbons, civic parades, or even guaranteed income, they have nevertheless fought some of the toughest battles in the post- Cold War era. They simply are, and perhaps always will be, "War Dogs".

Al J. Venter is a specialist military writer and has had 50 books published. He started his career with Geneva’s Interavia Group, then owners of International Defence Review, to cover military developments in the Middle East and Africa. Venter has been writing on these and related issues such as guerrilla warfare, insurgency, the Middle East and conflict in general for half a century. He was involved with Jane’s Information Group for more than 30 years and was a stringer for the BBC, NBC News (New York) as well as London’s _Daily Express_ and _Sunday Express_. He branched into television work in the early 1980s and produced more than 100 documentaries, many of which were internationally flighted. His one-hour film, _Africa’s Killing Fields_ (on the Ugandan civil war), was shown nationwide in the United States on the PBS network. Other films include an hour-long programme on the fifth anniversary of the Soviet invasion of Afghanistan, as well as _AIDS: The African Connection_, nominated for China’s Pink Magnolia Award. His last major book was _Portugal’s Guerrilla Wars in Africa_, nominated in 2013 for New York’s Arthur Goodzeit military history book award. It has gone into three editions, including translation into Portuguese.

The Wars Against Napoleon: Debunking the Myth of the Napoleonic Wars

Journal of the Indian Wars, Vol. 1, No. 4: Famous Fighting Units