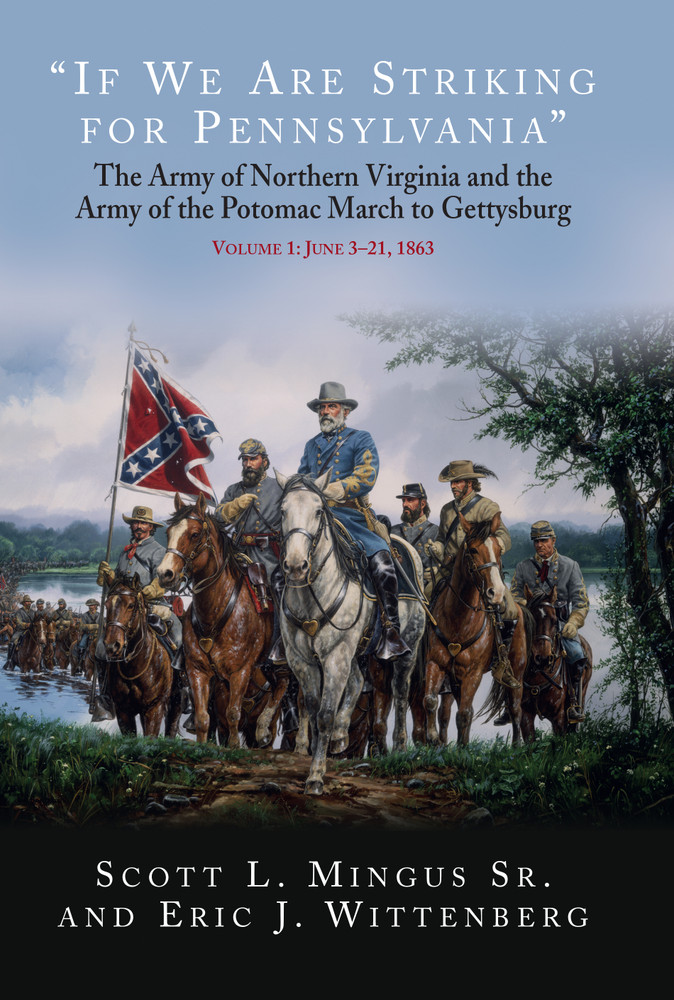 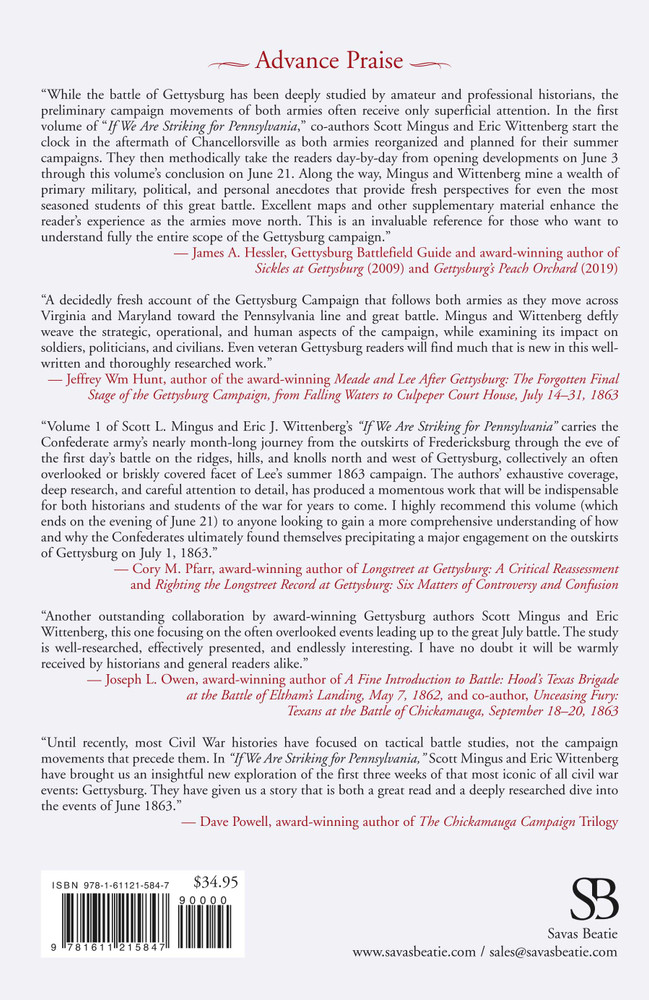 "If We Are Striking for Pennsylvania": The Army of Northern Virginia and Army of the Potomac March to Gettysburg Volume 1: June 3-22, 1863

Get your eBook here!

Click HERE to read the Front Matter, including Chapter 1. Yes, it is marvelous.

Scott L. Mingus Sr. and Eric J. Wittenberg, the authors of more than forty Civil War books, have once again teamed up to present a history of the opening moves of the Gettysburg Campaign in the two-volume study “If We Are Striking for Pennsylvania”: The Army of Northern Virginia and the Army of the Potomac March to Gettysburg. This compelling study is one of the first to integrate the military, media, political, social, economic, and civilian perspectives with rank-and-file accounts from the soldiers of both armies as they inexorably march toward their destiny at Gettysburg. This first installment covers June 3–21, 1863, while the second, spanning June 22–30, completes the march and carries the armies to the eve of the fighting.

Gen. Robert E. Lee began moving part of his Army of Northern Virginia from the Old Dominion toward Pennsylvania on June 3, 1863. Lee believed his army needed to win a major victory on Northern soil if the South was to have a chance at winning the war. Transferring the fighting out of war-torn Virginia would allow the state time to heal while he supplied his army from untapped farms and stores in Maryland and the Keystone State. Lee had also convinced Pres. Jefferson Davis that his offensive would interfere with the Union effort to take Vicksburg in Mississippi. The bold movement would trigger extensive cavalry fighting and a major battle at Winchester before culminating in the bloody three-day battle at Gettysburg.

As the Virginia army moved north, the Army of the Potomac responded by protecting the vital roads to Washington, D.C., in case Lee turned to threaten the capital. Opposing presidents Abraham Lincoln and Jefferson Davis, meanwhile, kept a close watch on the latest and often conflicting military intelligence gathered in the field. Throughout northern Virginia, central Maryland, and south-central Pennsylvania, meanwhile, civilians and soldiers alike struggled with the reality of a mobile campaign and the massive logistical needs of the armies. Thousands left written accounts of the passage of the long martial columns.

Mingus and Wittenberg mined hundreds of primary accounts, newspapers, and other sources to produce this powerful and gripping account. As readers will quickly learn, much of it is glossed over in other studies of the campaign, which cannot be fully understood without a firm appreciation of what the armies (and civilians) did on their way to the small crossroads town in Pennsylvania.

“While the battle of Gettysburg has been deeply studied by amateur and professional historians, the preliminary campaign movements of both armies often receive only superficial attention. In the first volume of “If We Are Striking for Pennsylvania,” co-authors Scott Mingus and Eric Wittenberg start the clock in the aftermath of Chancellorsville as both armies reorganized and planned for their summer campaigns. They then methodically take the readers day-by-day from opening developments on June 3 through this volume’s conclusion on June 21. Along the way, Mingus and Wittenberg mine a wealth of primary military, political, and personal anecdotes that provide fresh perspectives for even the most seasoned students of this great battle. Excellent maps and other supplementary material enhance the reader’s experience as the armies move north. This is an invaluable reference for those who want to understand fully the entire scope of the Gettysburg campaign.”  — James A. Hessler, Gettysburg Battlefield Guide and award-winning author of Sickles at Gettysburg (2009) and Gettysburg’s Peach Orchard (2019)

“A decidedly fresh account of the Gettysburg Campaign that follows both armies as they move across Virginia and Maryland toward the Pennsylvania line and great battle. Mingus and Wittenberg deftly weave the strategic, operational, and human aspects of the campaign, while examining its impact on soldiers, politicians, and civilians. Even veteran Gettysburg readers will find much that is new in this well-written and thoroughly researched work.” — Jeffrey Wm Hunt, author of the award-winning Meade and Lee After Gettysburg: The Forgotten Final Stage of the Gettysburg Campaign, from Falling Waters to Culpeper Court House, July 14–31, 1863

“Volume 1 of Scott L. Mingus and Eric J. Wittenberg’s “If We Are Striking for Pennsylvania” carries the Confederate army’s nearly month-long journey from the outskirts of Fredericksburg through the eve of the first day’s battle on the ridges, hills, and knolls north and west of Gettysburg, collectively an often overlooked or briskly covered facet of Lee’s summer 1863 campaign. The authors’ exhaustive coverage, deep research, and careful attention to detail, has produced a momentous work that will be indispensable for both historians and students of the war for years to come. I highly recommend this volume (which ends on the evening of June 21) to anyone looking to gain a more comprehensive understanding of how and why the Confederates ultimately found themselves precipitating a major engagement on the outskirts of Gettysburg on July 1, 1863.” — Cory M. Pfarr, award-winning author of Longstreet at Gettysburg: A Critical Reassessment and Righting the Longstreet Record at Gettysburg: Six Matters of Controversy and Confusion

“Another outstanding collaboration by award-winning Gettysburg authors Scott Mingus and Eric Wittenberg, this one focusing on the often overlooked events leading up to the great July battle. The study is well-researched, effectively presented, and endlessly interesting. I have no doubt it will be warmly received by historians and general readers alike.”  — Joseph L. Owen, award-winning author of A Fine Introduction to Battle: Hood’s Texas Brigade at the Battle of Eltham’s Landing, May 7, 1862, and co-author, Unceasing Fury: Texans at the Battle of Chickamauga, September 18–20, 1863

“Until recently, most Civil War histories have focused on tactical battle studies, not the campaign movements that precede them. In “If We Are Striking for Pennsylvania,” Scott Mingus and Eric Wittenberg have brought us an insightful new exploration of the first three weeks of that most iconic of all civil war events: Gettysburg. They have given us a story that is both a great read and a deeply researched dive into the events of June 1863.”  — Dave Powell, award-winning author of The Chickamauga Campaign Trilogy

“Mingus and Wittenberg have dug deeply into primary resources, and through lively prose have crafted a very engaging work.” – ECW Book Reviews

"Scott L. Mingus Sr., and Eric J. Wittenberg present here an engaging and comprehensive retelling of the critical period that preceded the conflict’s bloodiest encounter. Mingus and Wittenberg have produced what is sure to become a modern classic in Gettysburg Campaign literature." - Civil War Monitor

"If We Are Striking for Pennsylvania": The Army of Northern Virginia and the Army of the Potomac March to Gettysburg Volume 2: June 23-30, 1863