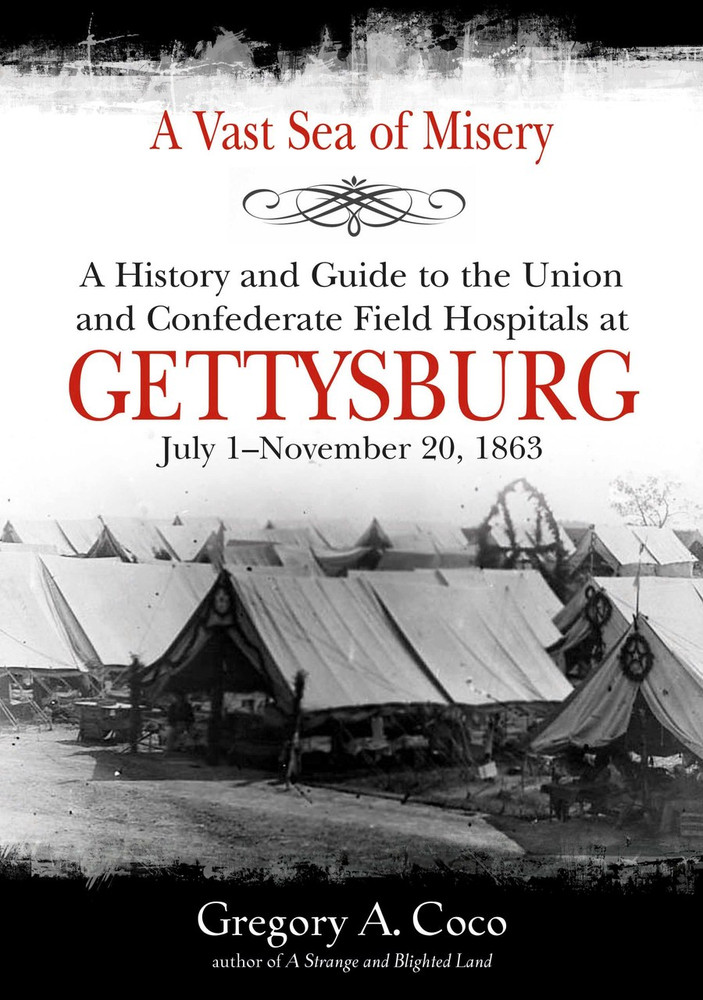 Nearly 26,000 men were wounded in the three-day battle of Gettysburg (July 1-3, 1863). It didn’t matter if the soldier wore blue or gray or was an officer or enlisted man, for bullets, shell fragments, bayonets, and swords made no class or sectional distinction. Almost 21,000 of the wounded were left behind by the two armies in and around the small town of 2,400 civilians. Most ended up being treated in makeshift medical facilities overwhelmed by the flood of injured. Many of these and their valiant efforts are covered in Greg Coco’s A Vast Sea of Misery: A History and Guide to the Union and Confederate Field Hospitals at Gettysburg, July 1-November 20, 1863.

The battle to save the wounded was nearly as terrible as the battle that placed them in such a perilous position. Once the fighting ended, the maimed and suffering warriors could be found in churches, public buildings, private homes, farmhouses, barns, and outbuildings. Thousands more, unreachable or unable to be moved remained in the open, subject to the uncertain whims of the July elements. As one surgeon unhappily recalled, “No written nor expressed language could ever picture the field of Gettysburg! Blood! blood! And tattered flesh! Shattered bones and mangled forms almost without the semblance of human beings!”

Based upon years of firsthand research, Coco’s A Vast Sea of Misery introduces readers to 160 of those frightful places called field hospitals. It is a sad journey you will never forget, and you won’t feel quite the same about Gettysburg once you finish reading.

“I thank Gregory Coco for writing this. A Vast Sea of Misery is just as important and a great companion book to his A Strange and Blighted Land.” – Gettysburg Chronicle

"...is is exciting to see A Vast Sea of Misery on the shelves again. It was a ground-breaking piece of Gettysburg literature when it first appeared thirty years ago, and today, in testimony to Coco's hard work, it still remains the "go-to" source on the battlefield's field hospitals. Perhaps, with the reappearance of his latest edition, Coco's hope that another enterprising writer will take up the mantle will - at long last - come to fruition."  -- Timothy Orr, Old Dominion University for Gettysburg Magazine

Gregory Ashton Coco, born and raised in Louisiana, lived in the Gettysburg area for nearly 35 years. In 1972, after serving in the U.S. Army, he earned a degree in American History from the University of Southwestern Louisiana. While in the military, Greg spent a tour of duty in Vietnam as a prisoner of war military interrogator and infantry platoon radio operator with the 25th Infantry and received, among other awards, the Purple Heart and Bronze Star. During his years in Gettysburg, Greg worked as a National Park Service Ranger and a Licensed Battlefield Guide. He wrote sixteen books and a dozen scholarly articles on Gettysburg and the Civil War. His A Strange and Blighted Land. Gettysburg: The Aftermath of a Battle was voted #12 in the Top 50 Civil War Books ever written. Greg died at age 62 in February of 2009. In his words, he was “the happy husband of Cindy L. Small for 26 years. He was the fortunate father of daughter, Keri E. Coco. He loved them both with all his heart.” Keri is married to Cail MacLean and they have a daughter, Ashton MacLean Coco.