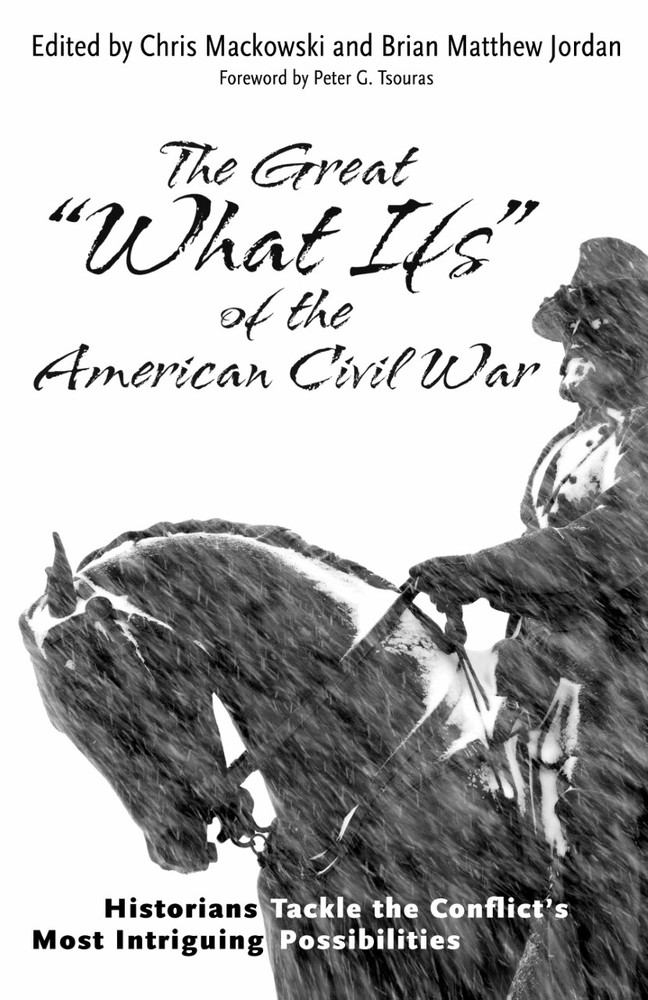 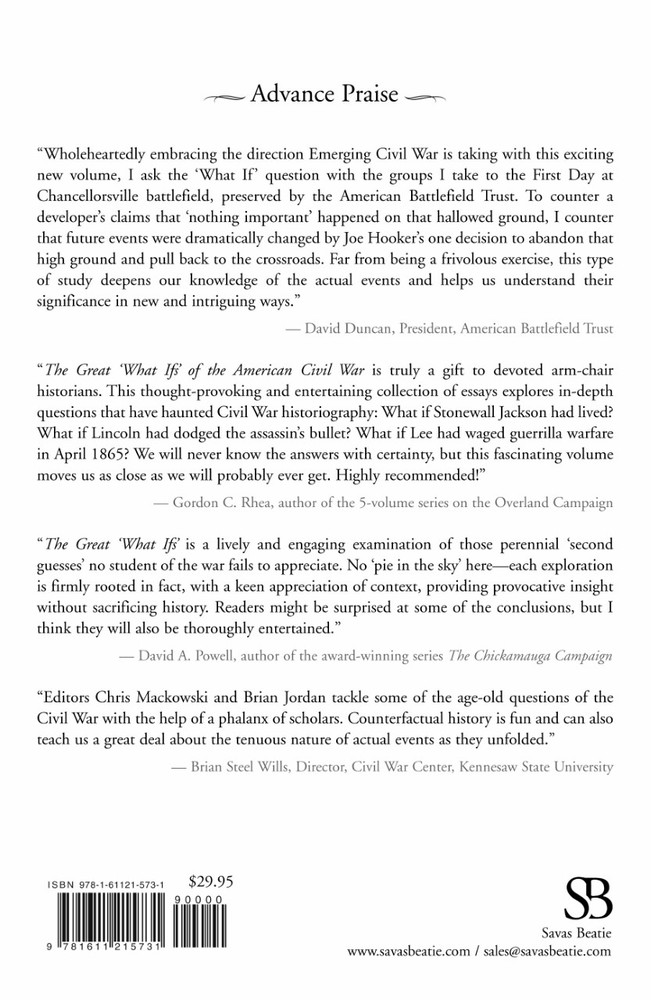 The Great "What Ifs" of the American Civil War: Historians Tackle the Conflict’s Most Intriguing Possibilities

“What If . . . ?” Every Civil War armchair general asks the question. Possibilities unfold. Disappointments vanish. Imaginations soar. More questions arise. “What if . . .” can be more than an exercise in wistful fantasy. A serious inquiry sparks rigorous exploration, demands critical thinking, and unlocks important insights.

The Great “What Ifs” of the American Civil War: Historians Tackle the Conflict’s Most Intriguing Possibilities is a collection of fourteen essays by the historians at Emerging Civil War, and includes a Foreword by acclaimed alternate history writer Peter G. Tsouras.

Each entry focuses on one of the most important events of the war and unpacks the options of the moment. To understand what happened, we must look with a clear and objective eye at what could have happened, with the full multitude of choices before us. “What if ” is a tool for illumination. These essays also explode the assumptions people make when they ask “what if ” and then jump to wishful conclusions.

This collection of thoughtful essays offers not alternate histories or counterfactual scenarios, but an invitation to ask, to learn, and to wonder, “What if . . . ?”

Foreword: “Paths Not Taken: Thoughts of an Alternate Historian,” by Peter G. Tsouras

Chapter One: “‘Persistently Misunderstood’: The What Ifs of Shiloh,” by Timothy B. Smith

Chapter Two: “The What Ifs of Antietam,” by Kevin Pawlak

Chapter Three: “What If Great Britain Had Intervened in the American Civil War?” by Dwight Hughes

Chapter Four: “What If Someone Else Had Been Offered Command of the Army of the Potomac?” by Frank Jastrzembski

Chapter Five: “What If Stonewall Jackson Had Not Been Shot?” by Kristopher D. White

Chapter Six: “To Go Around to the Right? Longstreet at Gettysburg,” by Dan Welch

Chapter Seven: “What If Jefferson Davis Hadn’t Been So Loyal to Braxton Bragg?” by Cecily Nelson Zander

Chapter Eight: “What If Robert E. Lee Had Struck a Blow at the North Anna River?” by Chris Mackowski

Chapter Nine: “‘Rally the loyal men of Missouri’: What If the 1864 Missouri Expedition Had Been Successful?” by Kristen Trout

Chapter Ten: “‘A New Endorsement of Abraham Lincoln’: Could Lincoln Have Won Reelection Without Sherman’s and Sheridan’s Successes?” by Jonathan A. Noyalas

Chapter Eleven: “What If Robert E. Lee Waged a Guerrilla War with his Army of Northern Virginia in April 1865?” by Barton A. Myers

“Wholeheartedly embracing the direction Emerging Civil War is taking with this exciting new volume, I ask the ‘What If ’ question with the groups I take to the First Day at Chancellorsville battlefield, preserved by the American Battlefield Trust. To counter a developer’s claims that ‘nothing important’ happened on that hallowed ground, I counter that future events were dramatically changed by Joe Hooker’s one decision to abandon that high ground and pull back to the crossroads. Far from being a frivolous exercise, this type of study deepens our knowledge of the actual events and helps us understand their significance in new and intriguing ways.” — David Duncan, President, American Battlefield Trust

“The Great ‘What Ifs’ of the American Civil War is truly a gift to devoted arm-chair historians. This thought-provoking and entertaining collection of essays explores in-depth questions that have haunted Civil War historiography: What if Stonewall Jackson had lived? What if Lincoln had dodged the assassin’s bullet? What if Lee had waged guerrilla warfare in April 1865? We will never know the answers with certainty, but this fascinating volume moves us as close as we will probably ever get. Highly recommended!” — Gordon C. Rhea, author of the 5-volume series on the Overland Campaign

“The Great ‘What Ifs’ is a lively and engaging examination of those perennial ‘second guesses’ no student of the war fails to appreciate. No ‘pie in the sky’ here—each exploration is firmly rooted in fact, with a keen appreciation of context, providing provocative insight without sacrificing history. Readers might be surprised at some of the conclusions, but I think they will also be thoroughly entertained.” — David A. Powell, author of the award-winning series The Chickamauga Campaign

“Editors Chris Mackowski and Brian Jordan tackle some of the age-old questions of the Civil War with the help of a phalanx of scholars. Counterfactual history is fun and can also teach us a great deal about the tenuous nature of actual events as they unfolded.” — Brian Steel Wills, Director, Civil War Center, Kennesaw State University

“The Great ‘What Ifs of the American Civil War” is far from being a lighthearted scholarly diversion, but expands our understanding of the complexity of actual events and provides us with new viewpoints to consider…through their knowledge, research, and writing and storytelling skill they have given us an entertaining read that many buffs will enjoy, learn from, and wonder, and will certain intrigue many historians as well.” – David Marshall

Chris Mackowski, Ph.D., is the editor in chief of Emerging Civil War. He is a writing professor in the Jandoli School of Communication at St. Bonaventure University and the historian-in-residence at Stevenson Ridge, a historic property on the Spotsylvania battlefield. Chris has authored or co-authored more than a dozen books on the Civil War. Brian Matthew Jordan is associate professor of Civil War history and chair of the History Department at Sam Houston State University. He lives in southeast Texas. He is the author of Unholy Sabbath: The Battle of South Mountain in History and Memory (Savas Beatie, 2011). His book Marching Home: Union Veterans and Their Unending Civil War (2015) was a finalist for the Pulitzer Prize.

AUDIO - The Great "What If's" of the American Civil War: Historians Tackle the Conflict’s Most Intriguing Possibilities