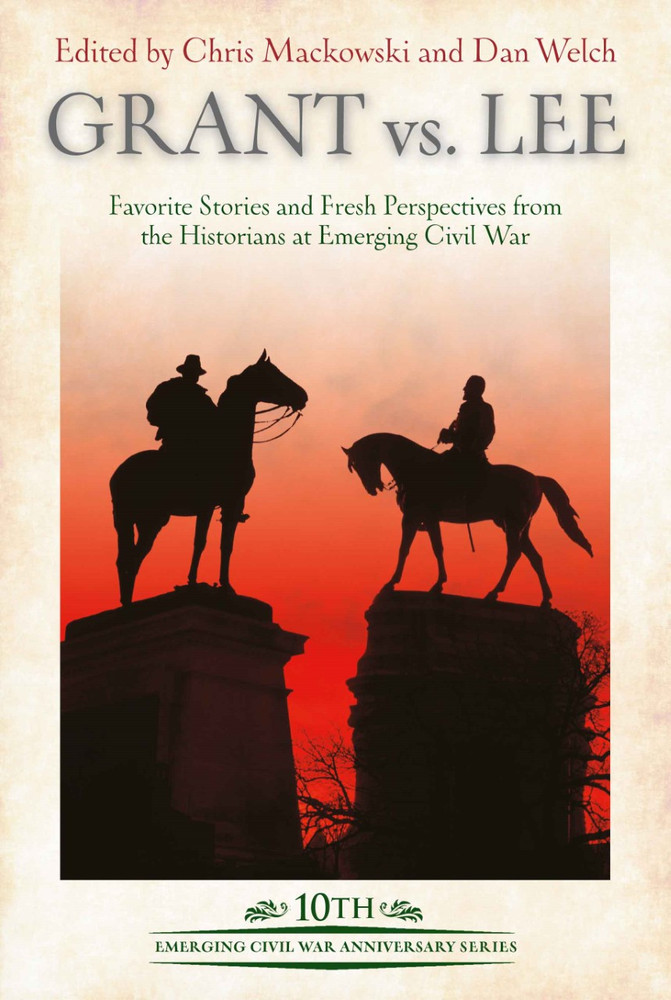 Grant vs Lee: Favorite Stories and Fresh Perspectives from the Historians at Emerging Civil War

Click HERE to read the Table of Contents and more, plus two chapters!

With the presidential election looming in the fall, President Abraham Lincoln needed to break the deadlock. To do so, he promoted Ulysses S. Grant—the man who had strung together victory after victory in the Western Theater, including the capture of two entire Confederate armies. The unassuming “dust-covered man” was now in command of all the Union armies, and he came east to lead them.

The unlucky soldiers of George G. Meade’s Army of the Potomac had developed a grudging respect for their Southern adversary and assumed a wait-and-see attitude: “Grant,” they reasoned, “has never met Bobby Lee yet.”

By the spring of 1864, Robert E. Lee, the commander of the Army of Northern Virginia, had come to embody the Confederate cause. Grant knew as much and decided to take the field with the Potomac army. He ordered his subordinates to forego efforts to capture the capital of Richmond in favor of annihilating Lee’s command. Grant’s directive to General Meade was straightforward: “Where Lee goes, there you will go also.”

Lee and Grant would come to symbolize the armies they led when the spring 1864 campaign began in northern Virginia in the Wilderness on May 5, 1864. What followed was a desperate and bloody death match that ran through the long siege of Richmond and Petersburg before finally ending at Appomattox Court House eleven months later—but at what cost along the way?

Grant vs. Lee: Favorite Stories and Fresh Perspectives from the Historians at Emerging Civil War recounts some of the most famous episodes and compelling human dramas from the marquee matchup of the Civil War. These expanded and revised essays also commemorate a decade of Emerging Civil War, a “best of” collection on the Overland Campaign, the siege of Petersburg, and the Confederate surrender at Appomattox.

“Engaging, entertaining, educational, and eclectic, this collection of brief essays by a cadre of ‘emerging’ Civil War scholars provides hope for the future of accessible Civil War history. Highly recommended.” — A. Wilson Greene, author of A Campaign of Giants: The Battle for Petersburg

“Emerging Civil War has knocked it out of the ballpark again! This riveting collection of essays explores the year-long confrontation between the Civil War’s two premier generals—Grant and Lee—focusing not only on the performance of each commander and their subordinate generals, but on the experience of the soldiers and the toll on the home front. Packed with new information and interpretations, this book is a must for students of the Overland and Petersburg campaigns.” — Gordon C. Rhea, author of the 5-volume series on the Overland Campaign

“The actions and decisions of Grant and Lee turned the final eleven months of the Civil War into the most decisive period of the conflict. In Grant vs. Lee, the editors and authors at Emerging Civil War offer enthusiasts of all levels a fantastic collection of essays covering diverse aspects of the Overland, Petersburg, and Appomattox campaigns. This assembly provides new interpretations about traditional topics—such as the strategy and tactics of the battles and campaigns and the trials of the common soldiers—and also examines previously overlooked cultural aspects while challenging persistent myths that have clouded proper understanding. Grant vs. Lee is a welcome addition to the scholarship of this period of the war.” — Tim Talbott, Director of Education & Interpretation, Pamplin Historical Park and the National Museum of the Civil War Soldier

"An important contribution to Civil War scholarship. An engrossing portrait of these important campaigns." - David Marshall