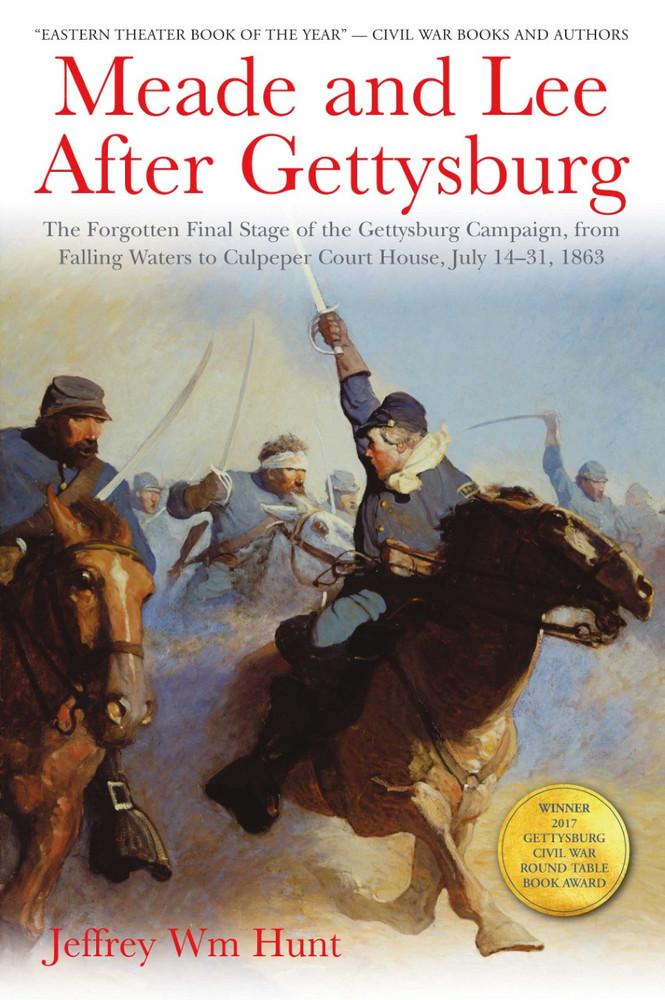 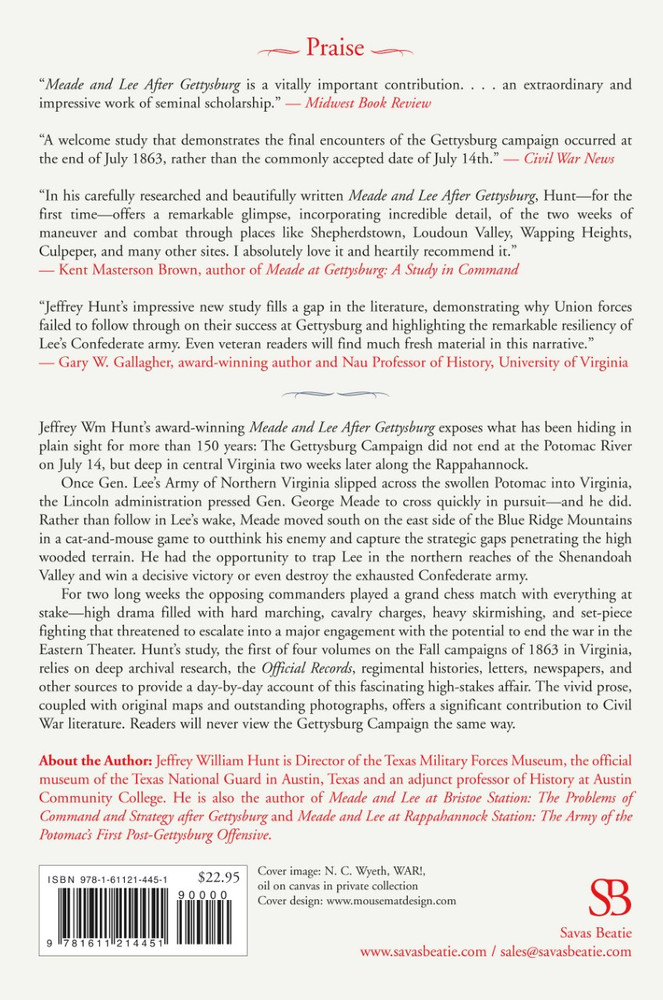 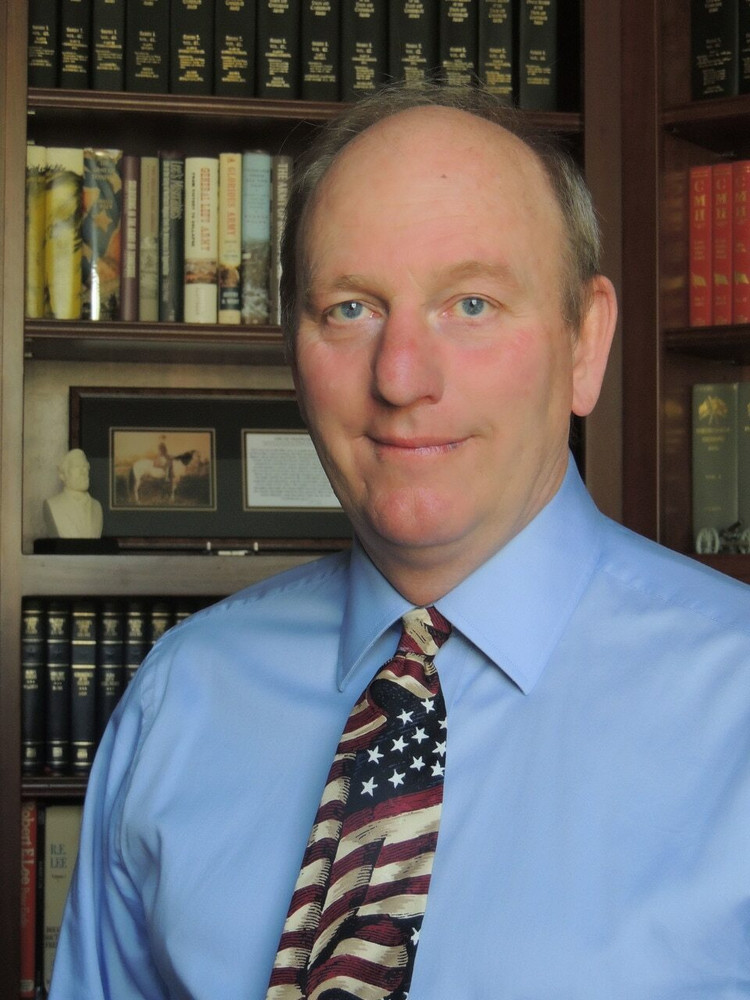 Now in paperback, Jeffrey Hunt’s Meade and Lee After Gettysburg: The Forgotten Final Stage of the Gettysburg Campaign, from Falling Waters to Culpeper Court House, July 14-31, 1863 exposes for Civil War readers what has been hiding in plain sight for 150 years: The Gettysburg Campaign did not end at the banks of the Potomac on July 14, but deep in central Virginia two weeks later along the line of the Rappahannock.

Meade and Lee After Gettysburg, the first of three volumes on the campaigns waged between the two adversaries from July 14 through the end of 1863, relies on Official Records, regimental histories, letters, newspapers, and other sources to provide a day-by-day account of this fascinating highstakes affair. The vivid prose, coupled with original maps and outstanding photographs, offers a significant contribution to Civil War literature.

Thanks to Hunt these important two weeks—until now overshadowed by the battle of Gettysburg and almost completely ignored by writers of Civil War history—have finally gotten the attention they have long deserved. Readers will never view the Gettysburg Campaign the same way.
Reviews
“A vitally important contribution to both community and academic library American Civil War history collections and supplemental studies reading lists, "Meade and Lee After Gettysburg: The Forgotten Final Stage of the Gettysburg Campaign, from Falling Waters to Culpeper Court House, July 14-31, 1863" is an extraordinary and impressive work of seminal scholarship.” - Midwest Book Review

“The book provides readers with a very satisfying blow-by-blow account of the final stages of the Gettysburg Campaign… For the Gettysburg literature, publisher Savas Beatie has for some time now performed excellent double duty in improving upon aging standard works and providing fresh perspectives on understudied or underappreciated aspects of the campaign. Meade and Lee After Gettysburg is an excellent example of the latter. In it, the true meaning of the events of the last half of July 1863 in northern Virginia are explored in detail for the first time and their importance (potential or otherwise) convincingly presented. The volume is highly recommended, and certainly whets one's appetite for the final two books in the trilogy.” - Civil War Books and Authors

"What we know about the operations of Robert E. Lee’s and George Gordon Meade’s armies from the time they recrossed the Potomac River after Gettysburg to when they came to rest in and around Orange and Culpeper Counties in Virginia is negligible. Jeffrey Hunt has stepped in to masterfully fill that yawning gap. In his carefully researched and beautifully written Meade and Lee After Gettysburg, Hunt—for the first time—offers a remarkable glimpse, incorporating incredible detail, of the two weeks of maneuver and combat through places like Shepherdstown, Loudoun Valley, Wapping Heights, Culpeper, and many other sites. I absolutely love it and heartily recommend it. " - Kent Masterson Brown, author of Retreat From Gettysburg: Lee, Logistics, and the Pennsylvania Campaign

"The period between Gettysburg and the Wilderness Campaign in May 1864 is one of the least explored aspects of the Civil War. Jeffrey Hunt’s impressive new study fills this gap in the literature, demonstrating why Union forces failed to follow through on their success at Gettysburg and highlighting the remarkable resiliency of Lee’s Confederate army. Even veteran readers will find much fresh material in this narrative." - Gary W. Gallagher, award-winning author and Nau Professor of History, University of Virginia

"Meade and Lee After Gettysburg is a blast of fresh air for Civil War students. Hunt demonstrates conclusively that the Gettysburg Campaign did not end with Lee’s crossing of the Potomac on July 14, but on August 1 along the Rappahannock line deep in Virginia. This interpretation is original and thoroughly convincing." - Bryce A. Suderow, co-author (with Edwin C. Bearss) of The Petersburg Campaign (2 vols.)

"Jeffrey Hunt’s Meade and Lee After Gettysburg is the first detailed modern tactical treatment of the two weeks after the ‘official’ end of the Gettysburg Campaign, and focuses particularly on the cavalry battle at Harpers Ferry on July 15 and the fighting at Manassas Gap on July 23-24. This book, the first of three on the fall 1863 campaigns between Lee and Meade, sets the stage for the harder campaigning that fall and is essential to understanding those campaigns. For students interested in what happened after the armies crossed the Potomac River, this is a must-read."  - Eric J. Wittenberg, award-winning co-author of One Continuous Fight: The Retreat from Gettysburg and the Pursuit of Lee’s Army of Northern Virginia, July 4-14, 1863

"Finally, someone has addressed the gap in the scholarship between July 14 and August 1, 1863! Hunt describes in detail the opportunities for engagement that Lee’s retreat into the Shenandoah Valley presented Meade’s army, and how some of the ‘risk averse’ Union generals failed to engage the Rebels until it was too late. It is all reminiscent of what had taken place at Williamsport just a few days earlier, and was destined to repeat itself in the coming months." - Thomas J. Ryan, award-winning author of Spies, Scouts, and Secrets in the Gettysburg Campaign

“This book fills a useful niche…the author writes well, and there are adequate maps and photos to enable wargame refights.”  - Miniature Wargames

“I would recommend this book to anyone interested in the American Civil War. It breaks new ground, covers in detail a dozen skirmishes that might have been dismissed in a couple of sentences in more general histories and does lay out clearly the problems faced by both generals and the courses of action they chose. 4 stars.” - Army Rumour Service

Jeffrey William Hunt is Director of the Texas Military Forces Museum, the official museum of the Texas National Guard in Austin, TX and an adjunct professor of History at Austin Community College. He had also served as the Curator of Collections and Director of the Living History Program at the Admiral Nimitz National Museum of the Pacific War in Fredericksburg, TX, and is the author of The Last Battle of the Civil War: Palmetto Ranch.