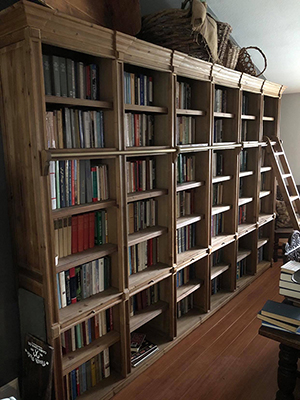 No, I haven’t read them all! My obsession with books about the “Late Unpleasantness” started when my mother bought me the newly released Robert Tanner’s Stonewall in the Valley: Thomas J. “Stonewall” Jackson’s Shenandoah Valley Campaign, Spring 1862 (Doubleday, 1976). I’ve been buying and selling books ever since.

If you take the time, really take the time, to appreciate the physical books you discover each has its own personality. Like your kids, they look different, and speak to you differently. Getting shelves to organize and display them is a real pleasure. They are part of you and your home. You leave notes inside some, bookmark certain locations.

They become old friends. When I have a spare hour I often crack one open and reread an Introduction or Conclusion. It’s like picking up the phone and calling someone you haven’t spoken with in a long time. You know the saying “A home without books is like a person without a soul.” Truth.

After a while—and it doesn’t take long—you begin to have favorites. Mine are my first editions written by Maryland veterans. And I love seeing them out. While I enjoy hitting the battlefields with good friends, I really loved visiting a good used bookstore or going to a Civil War Book and Relic show to search for titles to build my collection. I traded books there for others, bought and sold some, and really got to know the market.

The Civil War book niche is a small world and collecting makes it smaller. I’ve made many great friends over the years while collecting, sharing, and reading Civil War titles, including book dealers, small publishers, licensed battlefield guides, park rangers, and other enthusiasts like me.

Giants in the hobby back then included Bob Younger of Morningside Books, Tom Broadfoot of Broadfoot Publishing, Jim McLean at Butternut and Blue, Dave Zullo of Olde Soldier Books, Clark Kenyon of Camp Pope Bookshop, and a few others. These larger-than-life personalities often reprinted scarce and desirable titles. If you love Civil War books, and have the itch to collect, you know what I mean.

Unfortunately, many of these book dealers and small publishers have retired over the past couple decades, usually forced out of business by companies like Amazon and eBay, who intentionally engage in price-cutting to drive others out of the market. The Internet helped build our hobby and kill it. One hand gave, the other took away.

Who is left? Tom the Tar Heel is getting up there in years and has done his duty. He’s about ready to fish full time. About the only small publisher left is Theodore Savas of Savas Beatie. Ted and me have a long history.

I was living in Maryland when I started buying some of his books in the early 1990s. He began publishing as Savas Woodbury, and a few years later as Savas Publishing. I was an early subscriber to his quarterly journal Civil War Regiments. (Wish he would start it again!) About six years ago my career took me from Maryland to California, and it didn’t take long for Ted and I to get together. He invited me to one of his rock concerts with his band Arminius, and tricked me into hauling his amps and equipment in exchange for hanging out with a bunch of old dudes.

I don’t go to his office too often because his dog Kenya, the pit bull, doesn’t like me much. But that’s a story for another day.

Over the last couple of years I’ve been harassing Ted to fill the void left by the other dealers and publishers who are no longer in business. I’m sure he grew tired of my incessant nagging. No joke. I nagged him relentlessly. Sometimes he wouldn’t take my calls. He finally gave in and reprinted The Bachelder Papers, which was a big expensive risk. Covid hit right after he sent them to the printer.

Fortunately for everyone, the set was a huge success. I can tell you Ted and his staff were blown away when dozens of customers posted photos of the set online, emailed them, and even called to talk about them. “These people are happy because you made it possible to get this amazing resource for a very reasonable price,” I told him. “And it’s quality. No one else is listening to them.” They had been going for $750-850 on the used book market. Less than $200—and 100 signed/numbered?

2020 was a tough year for many small businesses, but I kept nagging. This time he took my calls. “Do Bachelder’s Gettysburg history!” I insisted. “Talk about a scarce book—it’s the ‘fourth’ volume of The Bachelder Papers.” I even volunteered mine for him to destroy and scan. That’s at the printer now.

Ted was friends with the late Ed Bearss and decided to reprint his Vicksburg trilogy. (He was going to fly and see Ed and hand him a fresh new set.) He got fancy with color maps (donated by Hal Jespersen in Ed’s memory), dust jackets, and more. And many missed out on the original Papers so Ted ran off another 300 sets.

The Internet also gave us chat forums and our love-hate relationship with Facebook. How many of us would know one another without it, and if we hadn’t been buying and reading Civil War books. Some on those groups have been very close friends over the past decade. If I hadn’t been collecting, I would have never met all these fine people, or hauled amps until my back hurt.

Oh, there is also a third question I get asked. “Don’t these books cost a lot of money?” A guy asked me that recently.

I pointed out that he pays $4.00 a day for a cup of sweet coffee and eats out for lunch or dinner several times a week, and pays a couple hundred a month for cable packages, 99% of which he never watches. “What’s all that cost you?” I asked. “What do you have to show for it? Dude, do the math. I have a large room full of friends, you have 20 extra pounds.”

A book lasts a lifetime and provides endless hours of pleasure and knowledge. Some go up in value, some go down. Coffee is with you for an hour and then you get rid of it.

So if you collect, keep at it. If you don’t, consider doing so, find your favorite area, and share your knowledge and experiences with others.

Take care and I hope to see many of you online, walking the battlefields, or visiting book and relic shows trying to find that elusive book you are seeking.