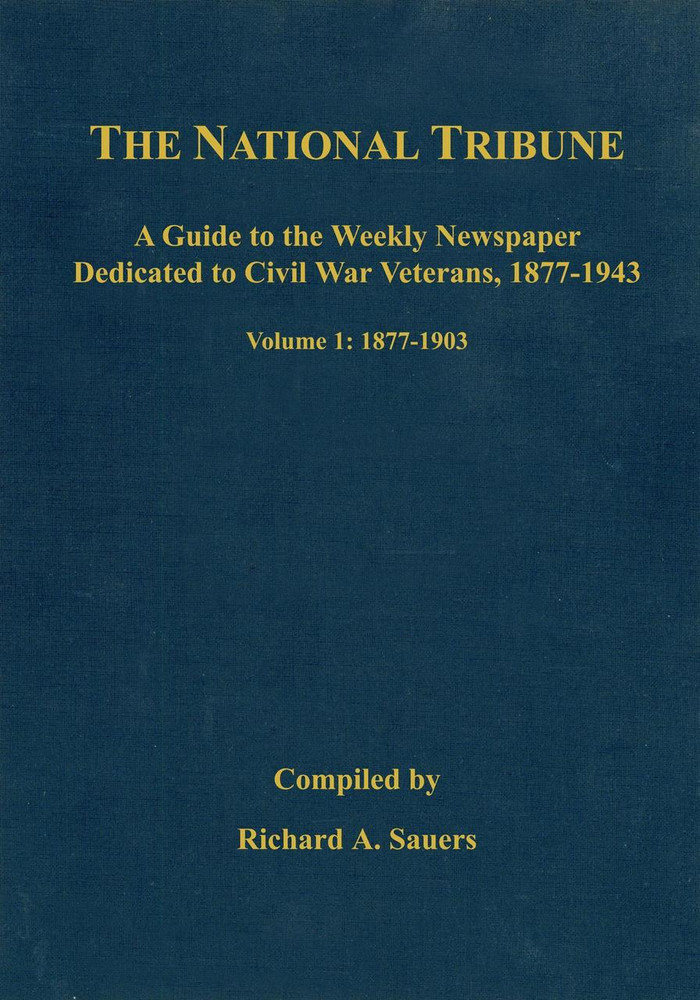 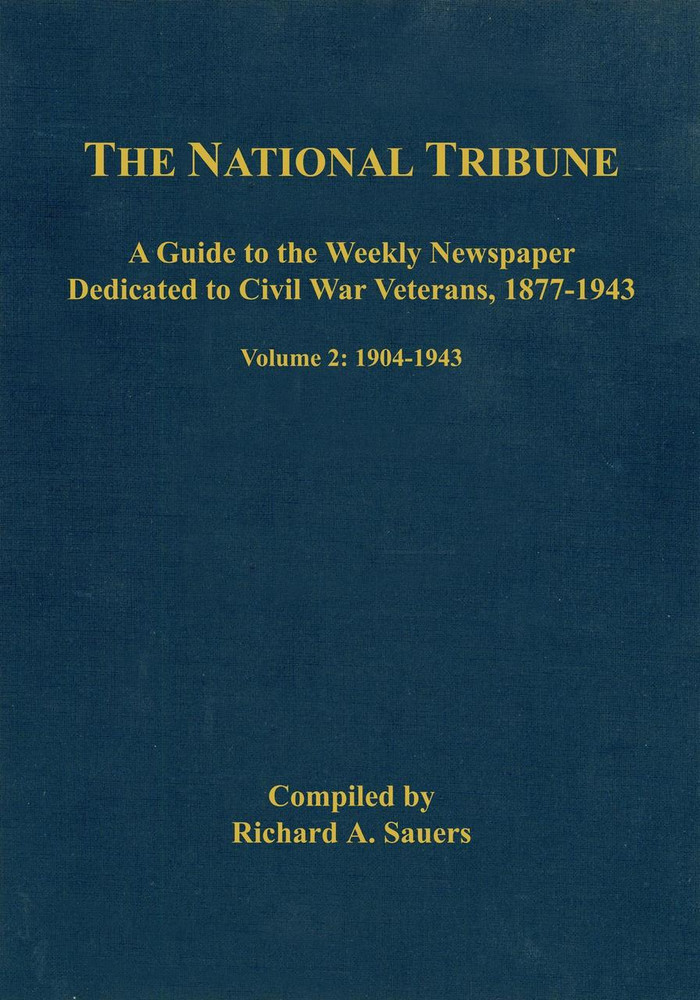 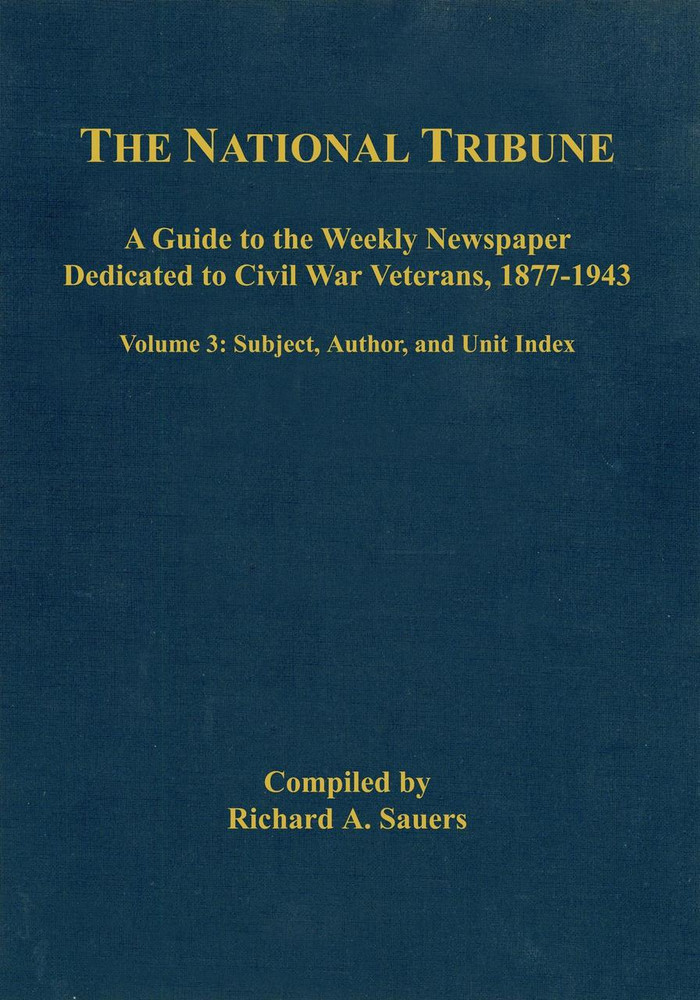 All books are sewn (not glued) for added strength, and printed on acid-free high quality paper.

The National Tribune set is available as a set only (print volumes are not sold separately; you need all three because they are designed to work together.) The Kindle digital volumes are used the same way, but are purchased separately here:

The original John McElroy special edition (100 copies only) sold out almost immediately. Don't miss out on this!
The National Tribune was the premier Union veterans’ newspaper of the post-Civil War era. Launched in 1877 by a New York veteran to help his comrades and sway Congress to pass better pension laws, a short time later the National Tribune began publishing firsthand accounts penned by the veterans themselves, and did so for decades thereafter. This rich, overlooked, and underused source of primary material offers a gold mine of eyewitness accounts of battles, strategy, tactics, camp life, and much more.

From generals to privates, the paper printed articles and long serials on everything from major battles such as Gettysburg and Antietam, to arguments about which battery fired the shot that killed General Leonidas Polk, whether Grant’s army was surprised at Shiloh, and just about every topic in between. Unbeknownst to many, a number of Confederate accounts were also published in the paper. Decades in the making, Dr. Rick Sauers’ unique multi-volume reference work The National Tribune Civil War Index: A Guide to the Weekly Newspaper Dedicated to Civil War Veterans, 1877-1943 lists every article (1877-1943).
There are two parts or volumes to this guide-index. The first two comprise the guide to the National Tribune, a chronological presentation of the Civil War contents of each issue from 1877 to 1903 in Volume 1, and from 1904 to 1943 in Volume 2. Each entry includes the page and column numbers, the author’s name, his unit (when known), the title of the article, and a brief note on the article’s subject if the title does not suggest it. Obituary sections include nominal listings. The longer columns with more names only have page and column noted. Thereafter are the listings for both the National Tribune Repository and the National Tribune Scrapbook.

Volume 3 consists of an Author Index, a Subject Index, a Unit Index (which consists of articles written by members of these units), and a Units as Sources Index (which includes articles about certain units not necessarily written by members of those units, as well as biographies of members of the unit). All four are alphabetical and are referenced by issue date (1877 to 1943). The major subject headings are broken down into subheadings in order to allow readers seeking finite information on a subject to locate the desired information as quickly as possible. Many of the larger battles and campaigns have the entries broken down into the Union corps and divisions that participated. I felt this approach would be easier than trying to divide the entries by topic. Cross references are used when needed.

Of course, it is also highly entertaining to simply read through the contents of issue after issue just to see what the veterans were writing about and when they were doing so. The National Tribune is a goldmine of information for anyone studying and/writing about the Civil War.
Thanks to Dr. Sauers, Civil War researchers and writers worldwide now have easy access to the valuable contents of this primary source material.
-------------------

The National Tribune can be found in a variety of libraries across the United States, BUT you need this set to access it with any hope of finding what you are seeking. A few institutions have complete files of the paper, but most repositories seem to have incomplete runs.

The following list includes only the major libraries that have extended runs of The National Tribune:

"While scholars of the veteran experience and Civil War memory will still find these volumes useful, this handsome set—tightly bound and printed on high quality paper—will pay its greatest dividends to traditional military historians." - The Civil War Monitor

A native of Lewisburg, PA, Richard A. Sauers received his B.A. in History from Susquehanna University, and both his M.A. and Ph.D. in history from The Pennsylvania State University. He is the author of more than two dozen books, including A Caspian Sea of Ink: The Meade-Sickles Controversy (1989), the highly-acclaimed two-volume Advance the Colors! Pennsylvania Civil War Battle Flags (1987-1991), and his latest, The Fishing Creek Confederacy: A Story of Civil War Draft Resistance (2013). Dr. Sauers serves as the executive director of the Western Museum of Mining and Industry in Colorado Springs.