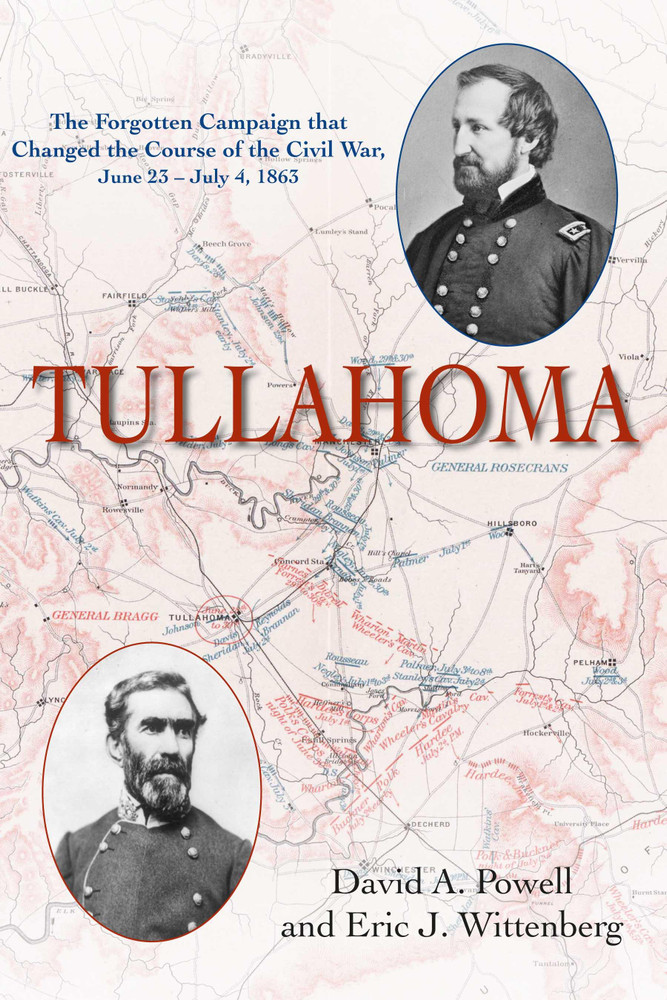 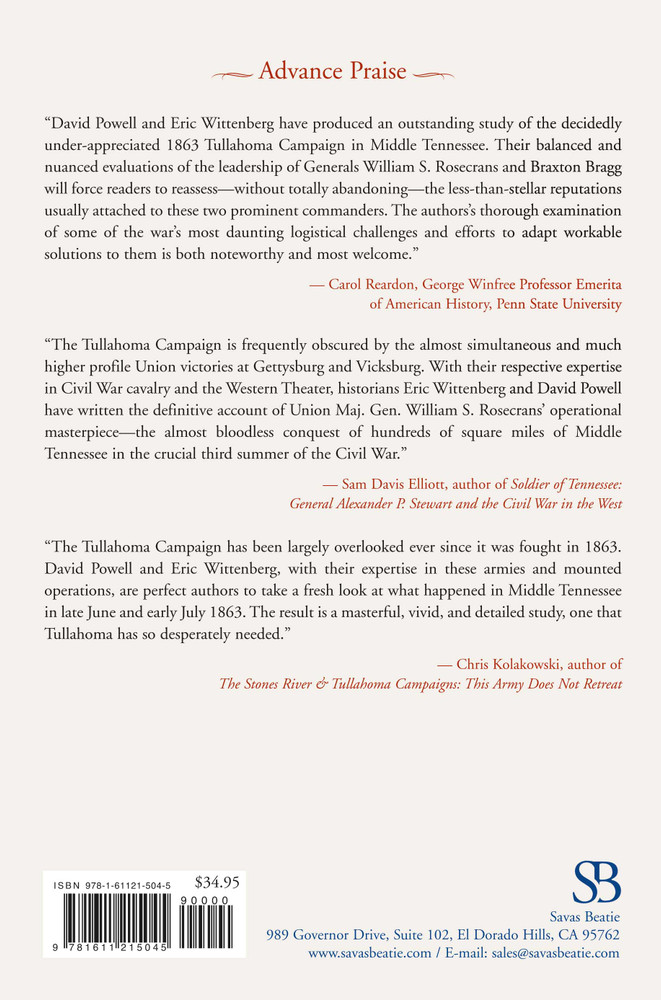 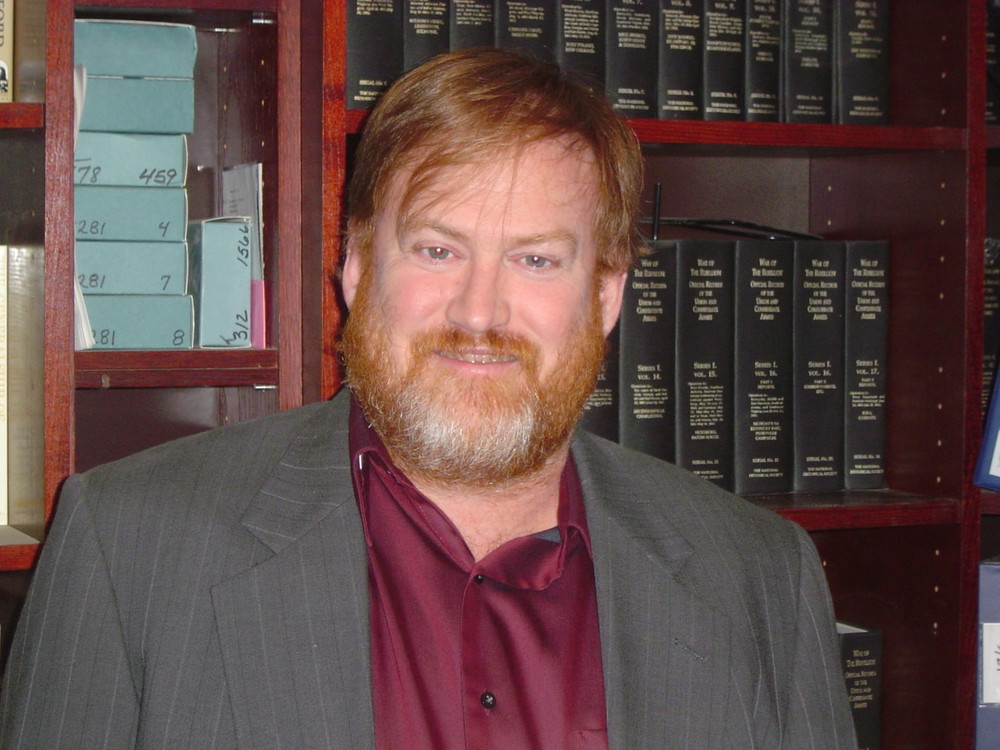 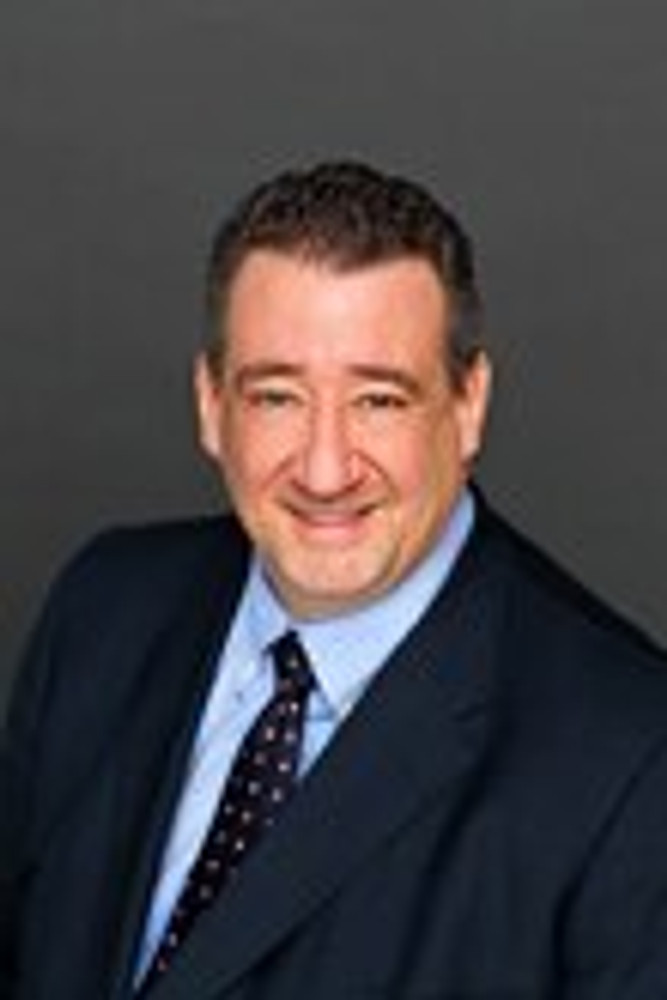 July 1863 was a momentous month in the Civil War. News of Gettysburg and Vicksburg electrified the North and devastated the South. Sandwiched geographically between those victories and lost in the heady tumult of events was news that William S. Rosecrans’s Army of the Cumberland had driven Braxton Bragg’s Army of Tennessee entirely out of Middle Tennessee. The brilliant campaign nearly cleared the state of Rebels and changed the calculus of the Civil War in the Western Theater. Despite its decisive significance, few readers even today know of these events. The publication of Tullahoma: The Forgotten Campaign that Changed the Course of Civil War, June 23 - July 4, 1863 by award-winning authors David A. Powell and Eric J. Wittenberg, forever rectifies that oversight.

On June 23, 1863, Rosecrans, with some 60,000 men, initiated a classic campaign of maneuver against Bragg’s 40,000. Confronted with rugged terrain and a heavily entrenched foe, Rosecrans intended to defeat Bragg through strategy rather than bloodshed by outflanking him and seizing control of Bragg’s supply line, the Nashville & Chattanooga Railroad, at Tullahoma and thus force him to fight a battle outside of his extensive earthworks. It almost worked.

The complex and fascinating campaign included deceit, hard marching, fighting, and incredible luck—both good and bad. Rosecrans executed a pair of feints against Guy’s Gap and Liberty Gap to deceive the Rebels into thinking the main blow would fall somewhere other than where it was designed to strike. An ineffective Confederate response exposed one of Bragg’s flanks—and his entire army—to complete disaster. Torrential rains and consequential decisions in the field wreaked havoc on the best-laid plans. Still Bragg hesitated, teetering on the brink of losing the second most important field army in the Confederacy. The hour was late and time was short, and his limited withdrawal left the armies poised for a climactic engagement that may have decided the fate of Middle Tennessee, and perhaps the war. Finally fully alert to the mortal threat facing him, Bragg pulled back from the iron jaws of defeat about to engulf him and retreated—this time all the way to Chattanooga, the gateway to the rest of the Southern Confederacy.

Powell and Wittenberg mined hundreds of archival and firsthand accounts to craft a splendid study of this overlooked campaign that set the stage for the Battles of Chickamauga and Chattanooga, the removal of Rosecrans and Bragg from the chessboard of war, the elevation of U.S. Grant to command all Union armies, and the early stages of William T. Sherman’s Atlanta Campaign. Tullahoma—one of the most brilliantly executed major campaigns of the war—was pivotal to Union success in 1863 and beyond. And now readers everywhere will know precisely why.

“David Powell and Eric Wittenberg have produced an outstanding study of the decidedly under appreciated 1863 Tullahoma Campaign in Middle Tennessee. Their balanced and nuanced evaluations of the leadership of Generals William S. Rosecrans and Braxton Bragg will force readers to reassess—without totally abandoning—the less-than-stellar reputations usually attached to these two prominent commanders. The authors’s thorough examination of some of the war’s most daunting logistical challenges and efforts to adapt workable solutions to them is both noteworthy and most welcome.”— Carol Reardon, George Winfree Professor Emerita of American History, Penn State University

“The Tullahoma Campaign is frequently obscured by the almost simultaneous and much higher profile Union victories at Gettysburg and Vicksburg. With their respective expertise in Civil War cavalry and the Western Theater, historians Eric Wittenberg and David Powell have written the definitive account of Union Maj. Gen. William S. Rosecrans’ operational masterpiece—the almost bloodless conquest of hundreds of square miles of Middle Tennessee in the crucial third summer of the Civil War.” — Sam Davis Elliott, author of Soldier of Tennessee: General Alexander P. Stewart and the Civil War in the West

“The Tullahoma Campaign has been largely overlooked ever since it was fought in 1863. David Powell and Eric Wittenberg, with their expertise in these armies and mounted operations, are perfect authors to take a fresh look at what happened in Middle Tennessee in late June and early July 1863. The result is a masterful, vivid, and detailed study, one that Tullahoma has so desperately needed.” — Chris Kolakowski, author of The Stones River & Tullahoma Campaigns: This Army Does Not Retreat

“Orders of magnitude more informative and valuable than anything previously written on the topic, Tullahoma ranks among the best of modern Civil War campaign histories.” – Civil War Books and Authors

“An excellent review of how the Union wrested western Tennessee from the Confederacy. ” – Collected Miscellany

“An outstanding addition to the literature of the war.” - The NYMAS Review

David A. Powell is a graduate of the Virginia Military Institute (1983) with a BA in history. He has published numerous articles in various magazines, and more than fifteen historical simulations of different battles. For the past decade, David’s focus has been on the epic battle of Chickamauga, and he is nationally recognized for his tours of that important battlefield. The results of that study are five books, The Maps of Chickamauga (2009), Failure in the Saddle (2010), and the three volumes of a Chickamauga trilogy: The Chickamauga Campaign: A Mad Irregular Battle (2014), The Chickamauga Campaign: Glory or the Grave (2015), and the final volume, The Chickamauga Campaign: Barren Victory (2016). His most recent works are Battle Above the Clouds (2017) and Union Command Failure in the Shenandoah: Major General Franz Sigel and the War in the Valley of Virginia, May 1864 (2019). David, his wife Anne, and their brace of Bloodhounds live and work in the northwest suburbs of Chicago, Illinois. He is Vice President of Airsped, Inc., a specialized delivery firm. Eric J. Wittenberg is an accomplished American Civil War cavalry historian and author. An attorney in Ohio, Wittenberg has authored nearly two dozen books on various Civil War subjects, with particular focus on cavalry operations, as well as three dozen articles in popular magazines such as North & South, Blue&Gray, America’s Civil War, and Gettysburg Magazine. His first book, Gettysburg’s Forgotten Cavalry Actions won the prestigious 1998 Bachelder-Coddington Literary Award (the second revised edition won the Army Historical Foundation’s Distinguished Writing Award, for Reprint, 2011). His 2014 book “The Devil’s to Pay”: John Buford at Gettysburg. A History and Walking Tour was awarded the Gettysburg Civil War Roundtable’s 2015 Book Award. Wittenberg is a favored speaker at Civil War Roundtables, conducts tours of various Civil War battlefields, and is an active preservationist. He lives in Columbus with his wife Susan and their beloved dogs. Visit Eric J. Wittenberg’s website: http://www.ericwittenberg.com

Fascinating and thorough study of William Rosecrans&#039; well-planned and executed campaign of maneuver that drove Braxton Bragg out of Middle Tennessee. Overshadowed at the time by the Union victories at Vicksburg and Gettysburg, it has remained in history&#039;s shadows ever since. Thanks to Powell and Wittenberg, that is no longer the case.