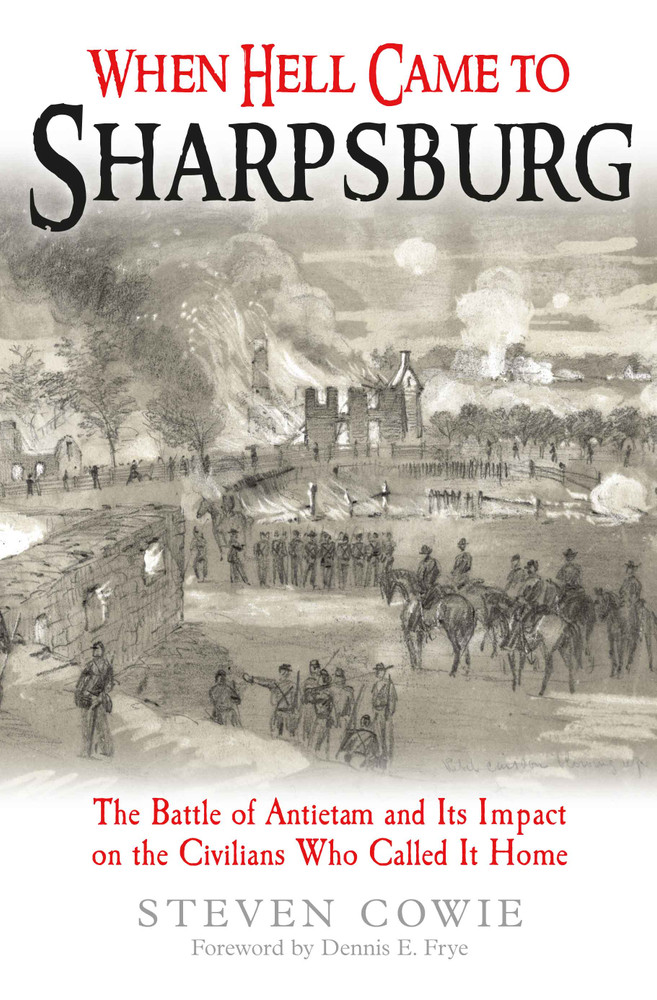 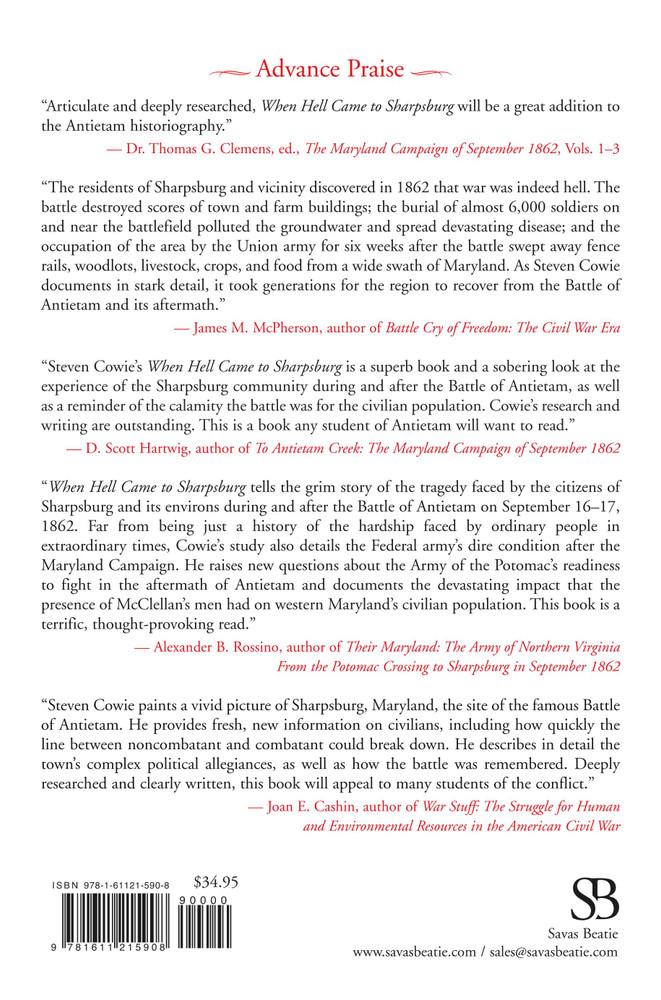 When Hell Came to Sharpsburg: The Battle of Antietam and its Impact on the Civilians Who Called it Home

The Battle of Antietam, fought in and around Sharpsburg, Maryland, on September 17, 1862, was the bloodiest day in American history. Despite the large number of books and articles on the subject, the horrendous effect that the battle had on area civilians is rarely discussed. When Hell Came to Sharpsburg: The Battle of Antietam and its Impact on the Civilians Who Called it Home by Steven Cowie rectifies this oversight.

By the time the battle ended about dusk that day, more than 23,000 men had been killed, wounded, or captured in just a dozen hours of combat—a grim statistic that tells only part of the story. The epicenter of that deadly day was the small community of Sharpsburg. Families lived, worked, and worshipped there. It was their home. And the horrific fighting turned their lives upside down.

When Hell Came to Sharpsburg investigates how the battle and its armies wreaked emotional, physical, and financial havoc on the people of Sharpsburg. For proper context, the author explores the savage struggle and its gory aftermath and explains how soldiers stripped the community of resources and spread diseases. Cowie carefully and meticulously follows fortunes of individual families like the Mummas, Roulettes, Millers, and many others—ordinary folk thrust into harrowing circumstances—and their struggle to recover from their unexpected and often devastating losses.

Cowie’s comprehensive study is grounded in years of careful research. He unearthed a trove of previously unused archival accounts and examined scores of primary sources such as letters, diaries, regimental histories, and official reports. Packed with explanatory footnotes, original maps, and photographs, Cowie’s richly detailed book is a must-read for those seeking new information on the battle and the perspective of the citizens who suffered because of it. Antietam’s impact on the local community was an American tragedy, and it is told here completely for the first time.

"Articulate and deeply researched, When Hell Came to Sharpsburg, will be a great addition to the Antietam historiography." - Dr. Thomas G. Clemens, ed., The Maryland Campaign of September 1862, Vols. 1-3

“The residents of Sharpsburg and vicinity discovered in 1862 that war was indeed hell. The battle destroyed scores of town and farm buildings; the burial of almost 6,000 soldiers on and near the battlefield polluted the groundwater and spread devastating disease; and the occupation of the area by the Union army for six weeks after the battle swept away fence rails, woodlots, livestock, crops, and food from a wide swath of Maryland. As Steven Cowie documents in stark detail, it took generations for the region to recover from the Battle of Antietam and its aftermath.” — James M. McPherson, author of Battle Cry of Freedom: The Civil War Era

“Steven Cowie’s When Hell Came to Sharpsburg is a superb book and a sobering look at the experience of the Sharpsburg community during and after the Battle of Antietam, as well as a reminder of the calamity the battle was for the civilian population. Cowie’s research and writing are outstanding. This is a book any student of Antietam will want to read.” — D. Scott Hartwig, author of To Antietam Creek: The Maryland Campaign of September 1862

“When Hell Came to Sharpsburg tells the grim story of the tragedy faced by the citizens of Sharpsburg and its environs during and after the Battle of Antietam on September 16–17,1862. Far from being just a history of the hardship faced by ordinary people in extraordinary times, Cowie’s study also details the Federal army’s dire condition after the Maryland Campaign. He raises new questions about the Army of the Potomac’s readiness to fight in the aftermath of Antietam and documents the devastating impact that the presence of McClellan’s men had on western Maryland’s civilian population. This book is a terrific, thought-provoking read.” — Alexander B. Rossino, author of Their Maryland: The Army of Northern Virginia From the Potomac Crossing to Sharpsburg in September 1862

“Steven Cowie paints a vivid picture of Sharpsburg, Maryland, the site of the famous Battle of Antietam. He provides fresh, new information on civilians, including how quickly the line between noncombatant and combatant could break down. He describes in detail the town’s complex political allegiances, as well as how the battle was remembered. Deeply researched and clearly written, this book will appeal to many students of the conflict.” — Joan E. Cashin, author of War Stuff: The Struggle for Human and Environmental Resources in the American Civil War

“I believe that this book makes a wonderful companion to the growing field of environmental history - further expanding the definition of military history beyond the drums and bugles. Further, the exhaustive research and concise writing style suggests much concerning our understanding of total warfare, or at the very least makes a good argument that this fight touched people in innumerable and long-lasting ways.” – Keith Harris History

“…offers the most comprehensive accounting to date of all that a Civil War battle did to an individual community. Cowie’s work is clearly a labor of love. The book’s exhaustive catalogue of physical and environmental destruction packs an emotional punch—and supplies readers with an intimate, almost “real time” narrative of Antietam’s aftermath.” – Civil War Monitor

Steven Cowie earned a degree from California State University, Long Beach. As part of the Los Angeles film industry, he penned spec screenplays and sold his award-winning short film to the Sundance Channel. A lifelong student of the Civil War, Cowie dedicated fifteen years to exclusively researching the Battle of Antietam. When Hell Came to Sharpsburg is his first book.