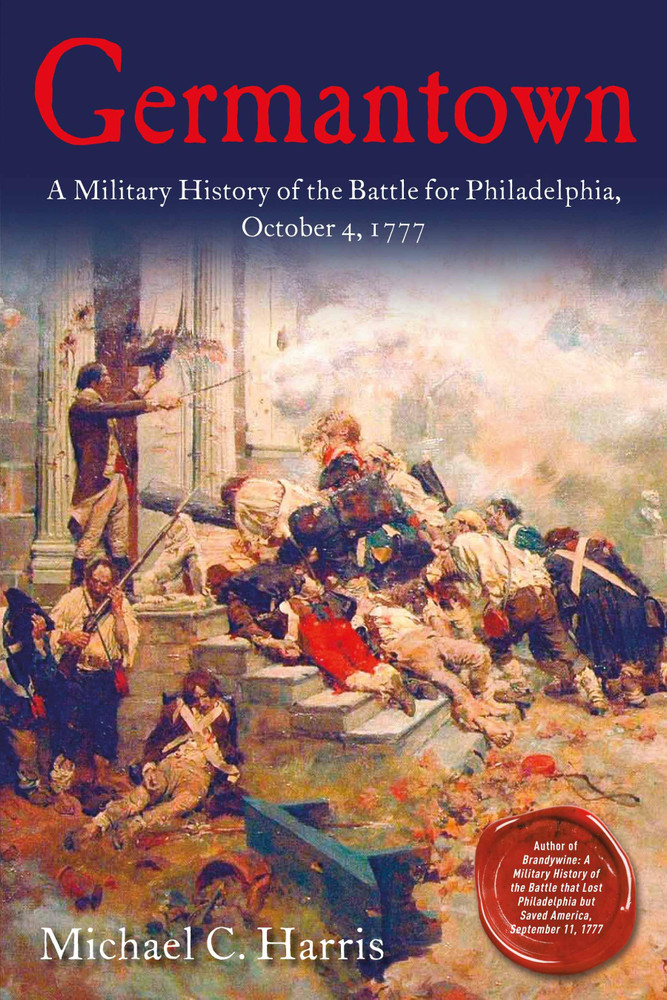 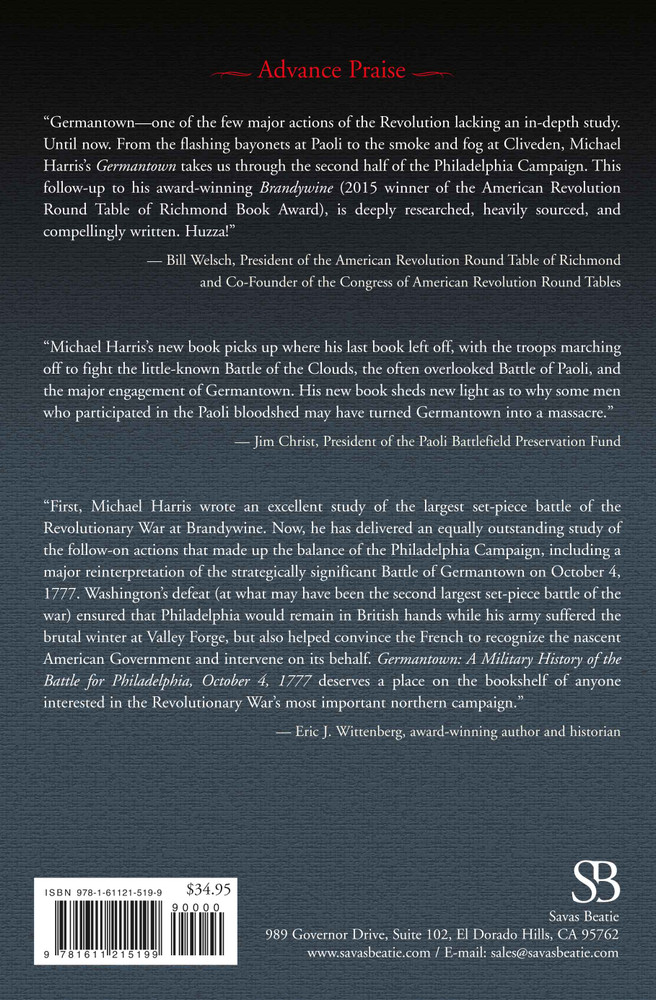 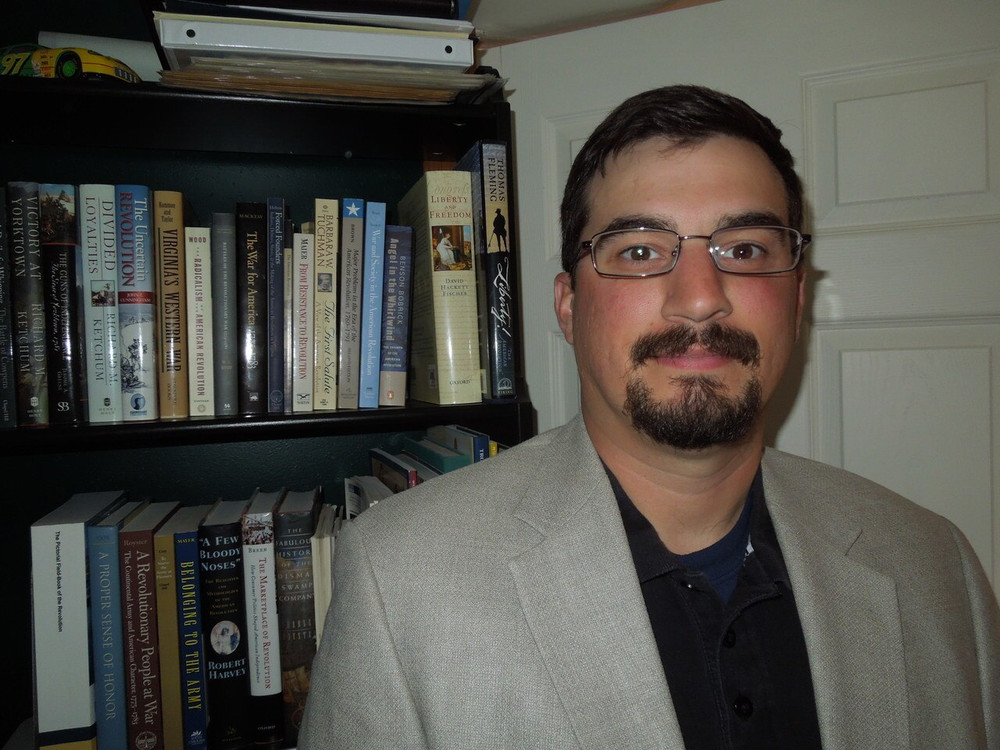 Today, Germantown is a busy neighborhood in Philadelphia. On October 4, 1777, it was a small village on the outskirts of the colonial capital whose surrounding fields and streets witnessed one of the largest battles of the American Revolution. The bloody battle represented George Washington’s attempt to recapture Philadelphia, but has long been overshadowed by better-known events like Brandywine, Saratoga, and Valley Forge. Award-winning author Michael C. Harris’s impressive Germantown: A Military History of the Battle for the Control of Philadelphia, October 4, 1777, elevates this important action from obscurity in the first full-length study of this pivotal engagement.

General Sir William Howe launched his campaign to capture Philadelphia in late July 1777, with an army of 16,500 British and Hessian soldiers aboard a 265-ship armada sailing from New York. Six difficult weeks later, Howe’s expedition landed near Elkton, Maryland, and moved north into Pennsylvania. Washington’s rebel army did all it could to harass Howe and fought and lost a major battle at Brandywine on September 11. Philadelphia fell to the British.

On October 4, obscured by darkness and a heavy morning fog, Washington launched a surprise attack on the British garrison at Germantown. His early attack found initial success and drove the British legions before him. The recapture of the colonial capital seemed within Washington’s grasp until poor decisions by the American high command brought about a reversal of fortune and a clear British victory. Like Brandywine, however, the bloody fight at Germantown proved that Continental soldiers could stand toe-to-toe with British Regulars. The Battle of Germantown began a protected quasi-siege of the British garrison in Germantown prior to the travails soon to come that winter at Valley Forge.

Harris’s Germantown is the first complete study to merge the strategic, political, and tactical history of this complex operation and important set-piece battle into a single compelling account. Following up on his award-winning Brandywine, Harris’s sweeping prose relies almost exclusively on original archival research and a deep personal knowledge of the terrain. Complete with original maps, numerous illustrations, and modern photos, and told largely through the words of those who fought there, Germantown: A Military History of the Battle for the Control of Philadelphia, October 4, 1777 is sure to please the most discriminating reader and assume its place as one of the finest military studies of its kind.

“Michael Harris’s new book picks up where his last book left off, with the troops marching off to fight the little-known Battle of the Clouds, the often overlooked Battle of Paoli, and the major engagement of Germantown. His new book sheds new light as to why some men who participated in the Paoli bloodshed may have turned Germantown into a massacre.” — Jim Christ, President of the Paoli Battlefield Preservation Fund

“First, Michael Harris wrote an excellent study of the largest set-piece battle of the Revolutionary War at Brandywine. Now, he has delivered an equally outstanding study of the follow-on actions that made up the balance of the Philadelphia Campaign, including a major reinterpretation of the strategically significant Battle of Germantown on October 4, 1777. Washington’s defeat (at what may have been the second largest set-piece battle of the war) ensured that Philadelphia would remain in British hands while his army suffered the brutal winter at Valley Forge, but also helped convince the French to recognize the nascent American Government and intervene on its behalf. Germantown: A Military History of the Battle for Philadelphia, October 4, 1777 deserves a place on the bookshelf of anyone interested in the Revolutionary War’s most important northern campaign.” — Eric J. Wittenberg, award-winning author and historian

"...the first complete study to merge the strategic, political, and tactical history of this complex operation and important set-piece battle into a single compelling account. Enhanced for the reader with the inclusion of original maps, numerous illustrations, and modern photos... draws largely through the words of those who fought there. The result is one of the most informative and 'reader friendly' military studies of its kind." - Midwest Book Review

Michael C. Harris is a graduate of the University of Mary Washington and the American Military University. He has worked for the National Park Service in Fredericksburg, Virginia, Fort Mott State Park in New Jersey, and the Pennsylvania Historical and Museum Commission at Brandywine Battlefield. He conducted tours and staff rides of many of the east coast battlefields. Michael is certified in secondary education and currently teaches in the Philadelphia region. He lives in Pennsylvania with his wife, Michelle, and son, Nathanael. His first book, Brandywine, was awarded the The American Revolution Round Table of Richmond book award in 2014.