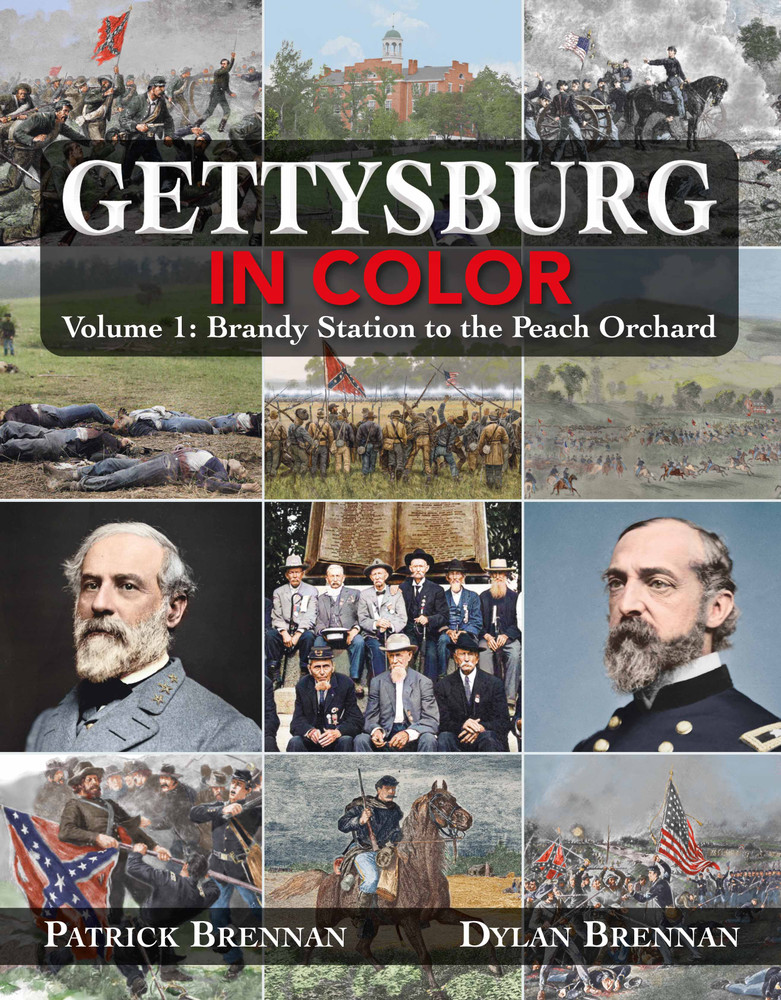 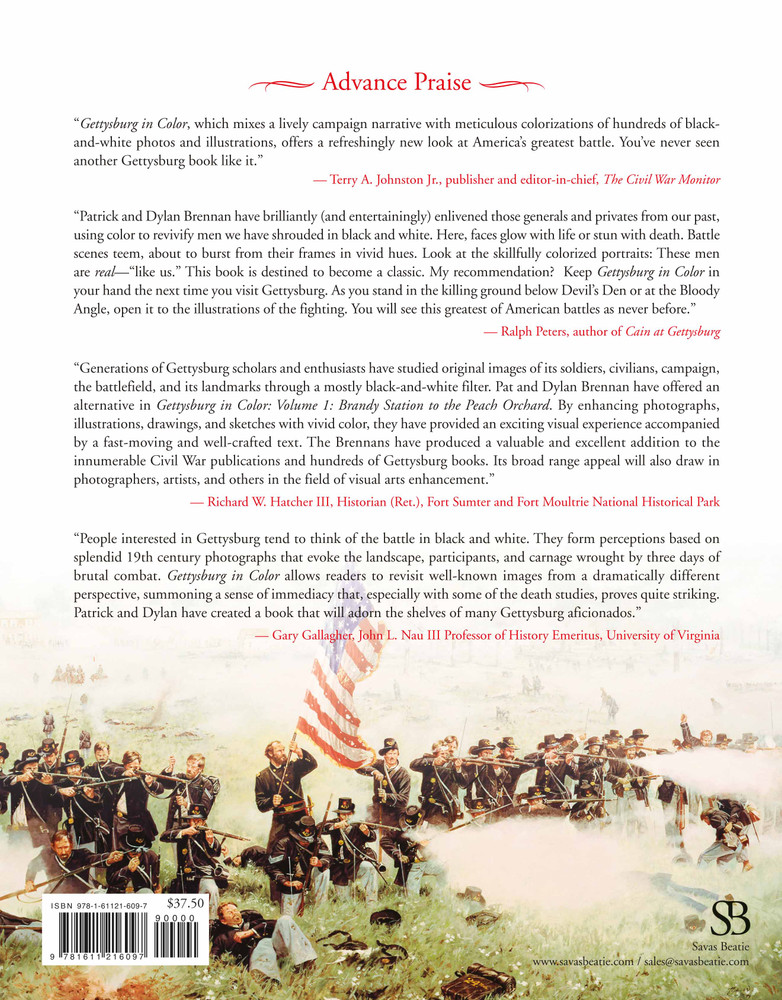 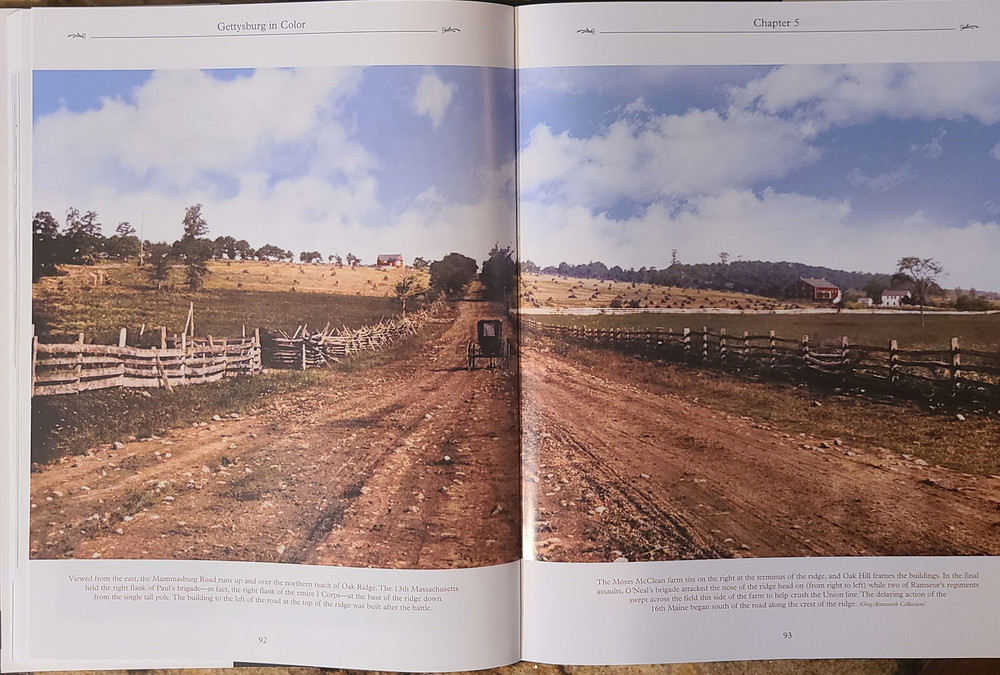 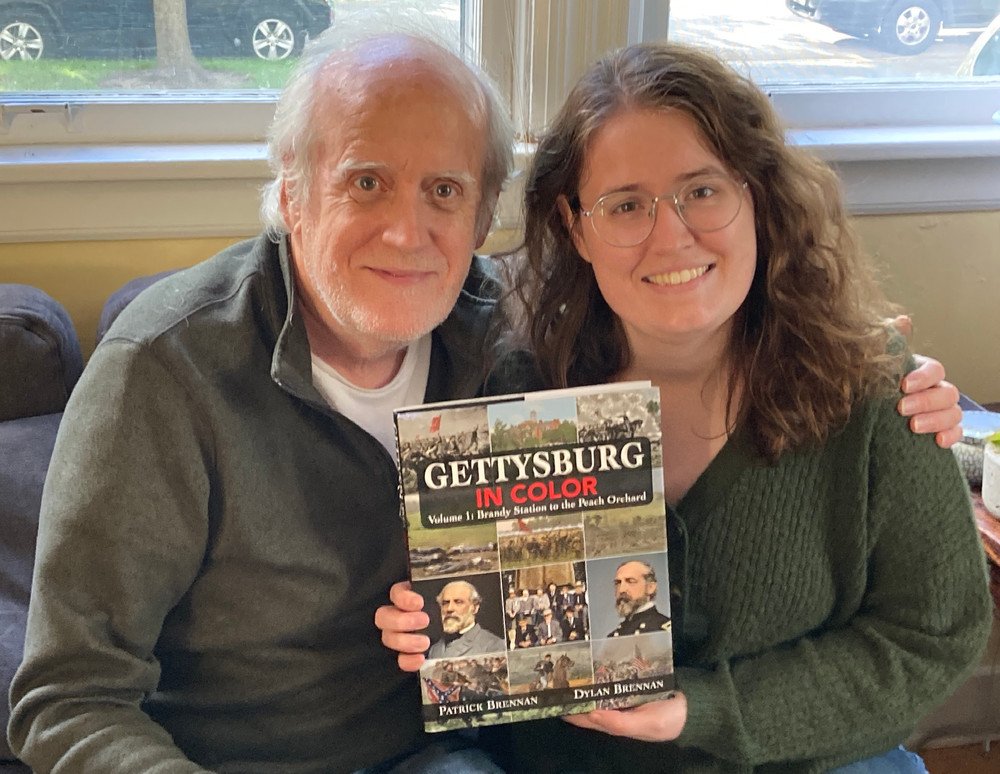 Artificial Intelligence meets Gettysburg. And it is a marvelous pairing.

Patrick Brennan, a long-time student of the Civil War, published author, and an editorial advisor for The Civil War Monitor magazine, has teamed up with his technology-astute daughter Dylan Brennan to bring the largest Civil War battle to life in the remarkable 2-volume study: Gettysburg in Color. Volume 1 covers Brandy Station to the Peach Orchard, and Volume 2 covers The Wheatfield to Falling Waters. 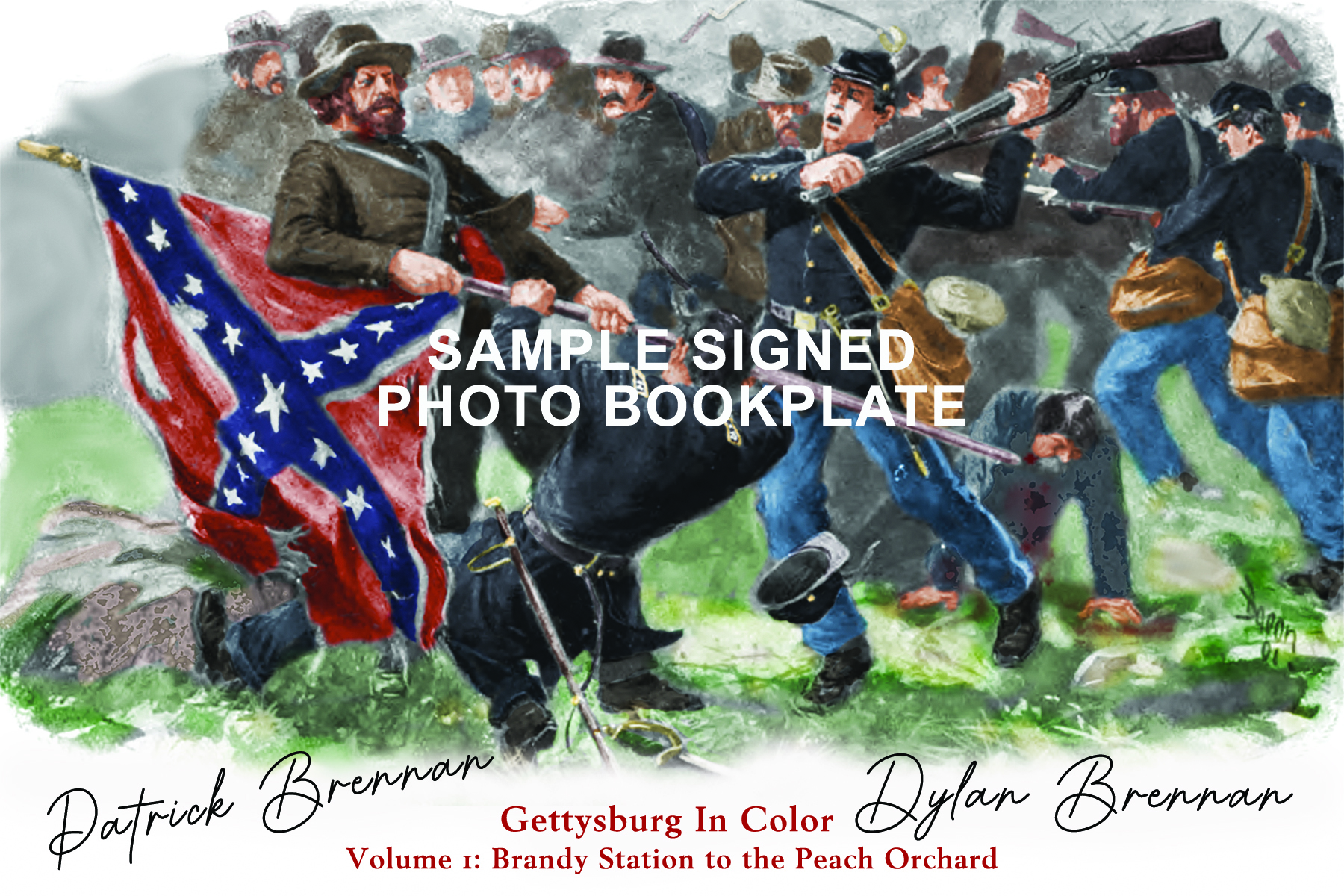 Rather than guess or dabble with the colors, the Brennans used an artificial intelligence-based computerized color identifier to determine the precise color of uniforms, flesh, hair, equipment, terrain, houses, and much more. The result is a monumental full-color study of the important three-day battle that brings the men, the landscape, and the action into the 21st Century.

The deep colorization of battle-related woodcuts, for example, reveals a plethora of details that have passed generations of eyes unseen. The photos of the soldiers and their officers look as if they were taken yesterday. 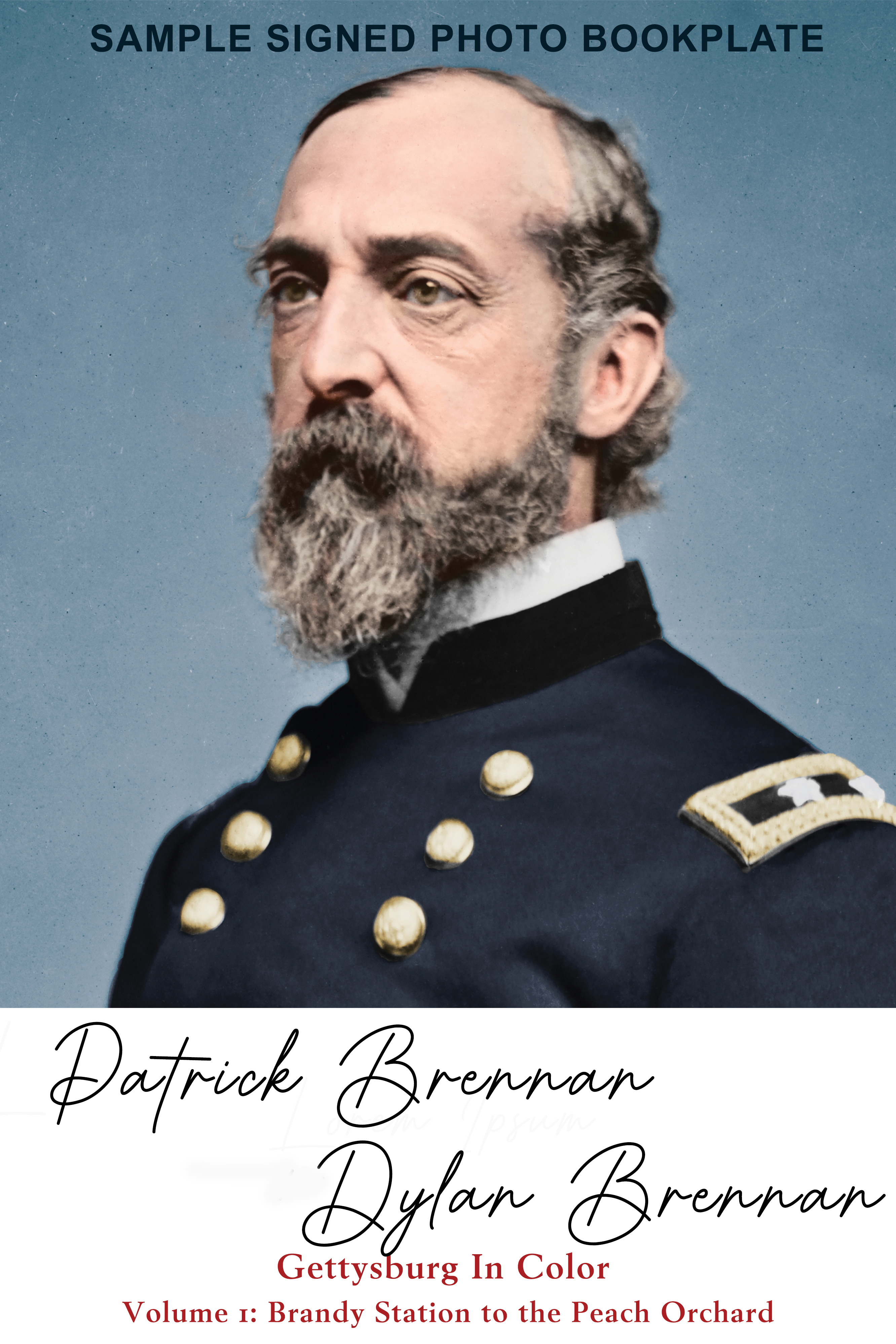 The use of this modern technology shines a light on one Gettysburg photographic mystery in particular. Colorizing some of the battle’s “death” images revealed the presence of Union and

Confederate dead that may help determine the previously unknown location of the photographs. That may also be a “first” when it comes to Civil War photography, as Pat Brennan explains: “It was long believed this was an image of seven dead Union soldiers. In fact, only five are Union men. The other two are Confederates. I am still researching the issue, but I believe this may be the only photo we have from the entire Civil War that portrays dead from both sides.” 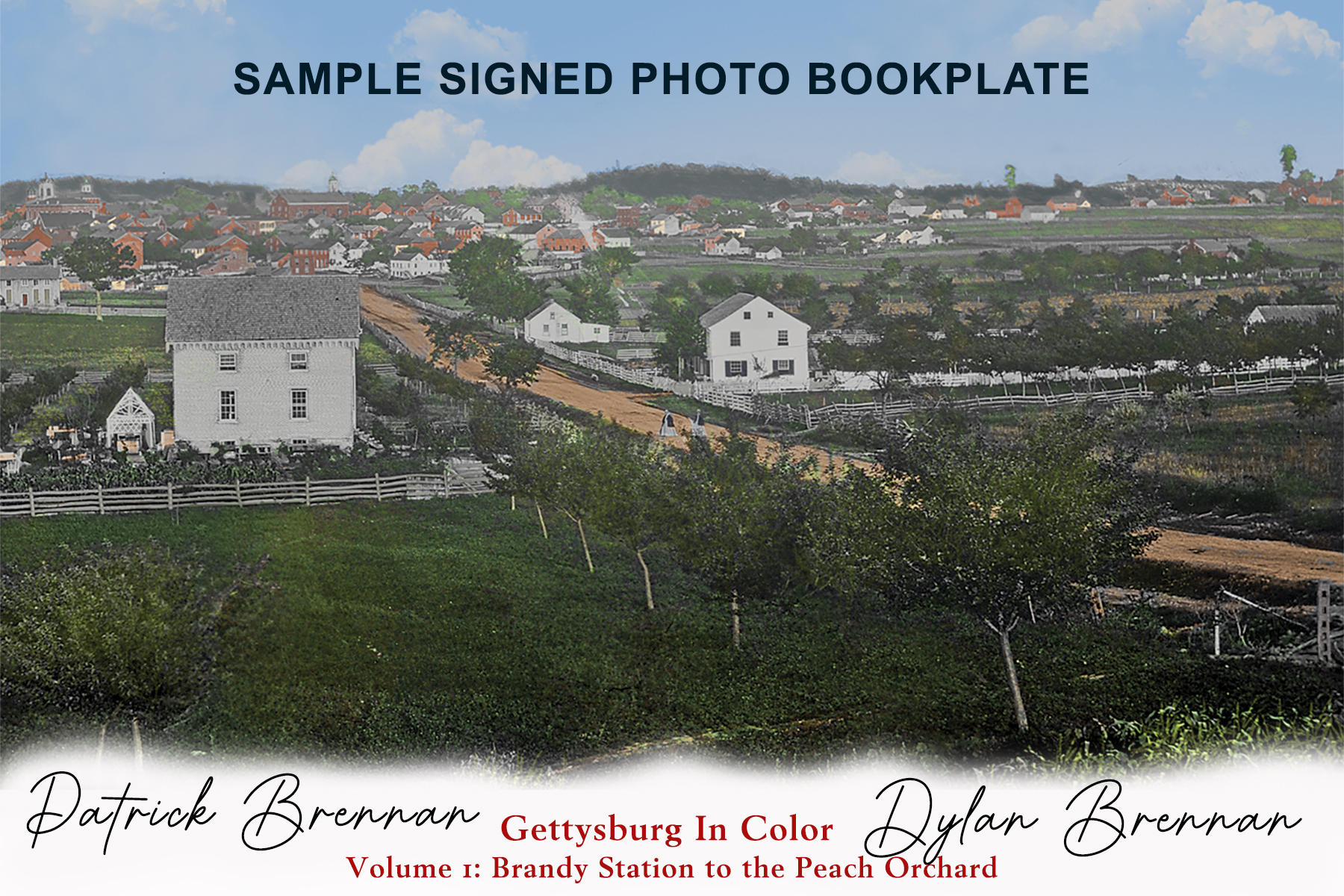 In the early 1960s, the unique presentation in Bruce Catton’s The American Heritage Picture History of the Civil War spurred the interest of a generation of readers. With its sweeping prose and stunning visuals, Gettysburg in Color will have a similar impact on future generations as it takes its place as one of the most influential titles on the American Civil War.

“Gettysburg in Color, which mixes a lively campaign narrative with meticulous colorizations of hundreds of black-and-white photos and illustrations, offers a refreshingly new look at America’s greatest battle. You’ve never seen another Gettysburg book like it.” — Terry A. Johnston Jr., publisher and editor-in-chief, The Civil War Monitor

“Patrick and Dylan Brennan have brilliantly (and entertainingly) enlivened those generals and privates from our past, using color to revivify men we have shrouded in black and white. Here, faces glow with life or stun with death. Battle scenes teem, about to burst from their frames in vivid hues. Look at the skillfully colorized portraits: These men are real—“like us.” This book is destined to become a classic. My recommendation? Keep Gettysburg in Color in your hand the next time you visit Gettysburg. As you stand in the killing ground below Devil’s Den or at the Bloody Angle, open it to the illustrations of the fighting. You will see this greatest of American battles as never before.” — Ralph Peters, author of Cain at Gettysburg

“Generations of Gettysburg scholars and enthusiasts have studied original images of its soldiers, civilians, campaign, the battlefield, and its landmarks through a mostly black-and-white filter. Pat and Dylan Brennan have offered an alternative in Gettysburg in Color: Volume 1: Brandy Station to the Peach Orchard. By enhancing photographs, illustrations, drawings, and sketches with vivid color, they have provided an exciting visual experience accompanied by a fast-moving and well-crafted text. The Brennans have produced a valuable and excellent addition to the innumerable Civil War publications and hundreds of Gettysburg books. Its broad range appeal will also draw in photographers, artists, and others in the field of visual arts enhancement.” — Richard W. Hatcher III, Historian (Ret.), Fort Sumter and Fort Moultrie National Historical Park

“People interested in Gettysburg tend to think of the battle in black and white. They form perceptions based on splendid 19th century photographs that evoke the landscape, participants, and carnage wrought by three days of brutal combat. Gettysburg in Color allows readers to revisit well-known images from a dramatically different perspective, summoning a sense of immediacy that, especially with some of the death studies, proves quite striking. Patrick and Dylan have created a book that will adorn the shelves of many Gettysburg aficionados.” — Gary Gallagher, John L. Nau III Professor of History Emeritus, University of Virginia

Pat Brennan is the author of Secessionville: Assault on Charleston (1996), To Die Game: General J. E. B. Stuart, CSA (1998), and more than twenty articles for a variety of Civil War magazines and journals. Pat is on the Editorial Advisory Board for The Civil War Monitor and his work has appeared in the Chicago Tribune and The Reader. He has lectured around the country on the Civil War and Bob Dylan. Dylan Brennan works on the broadcast video production team at Tasty Trade, a real time, online financial network based in Chicago.