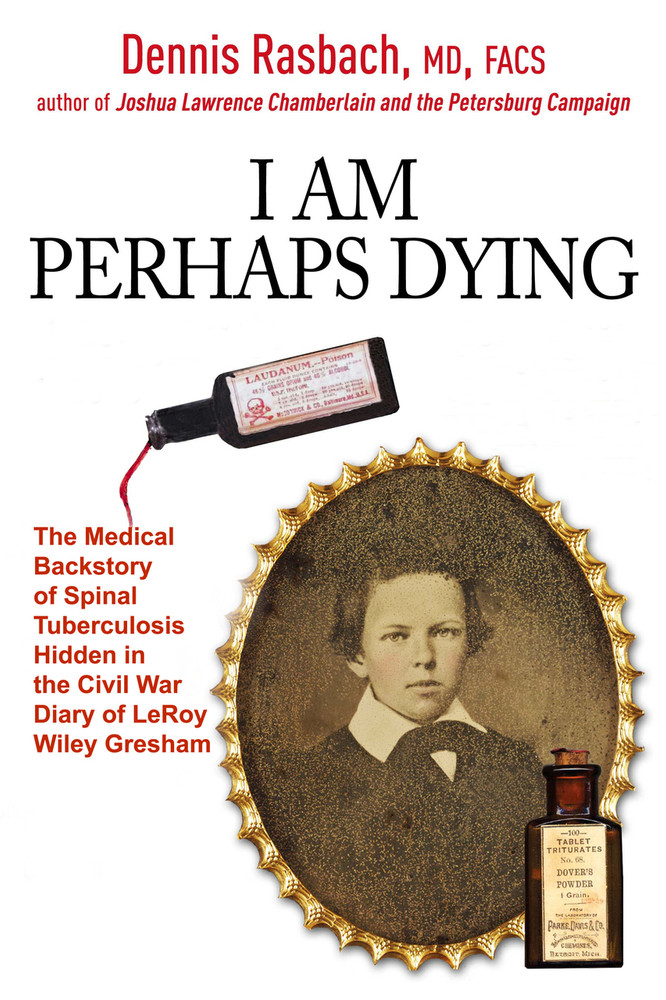 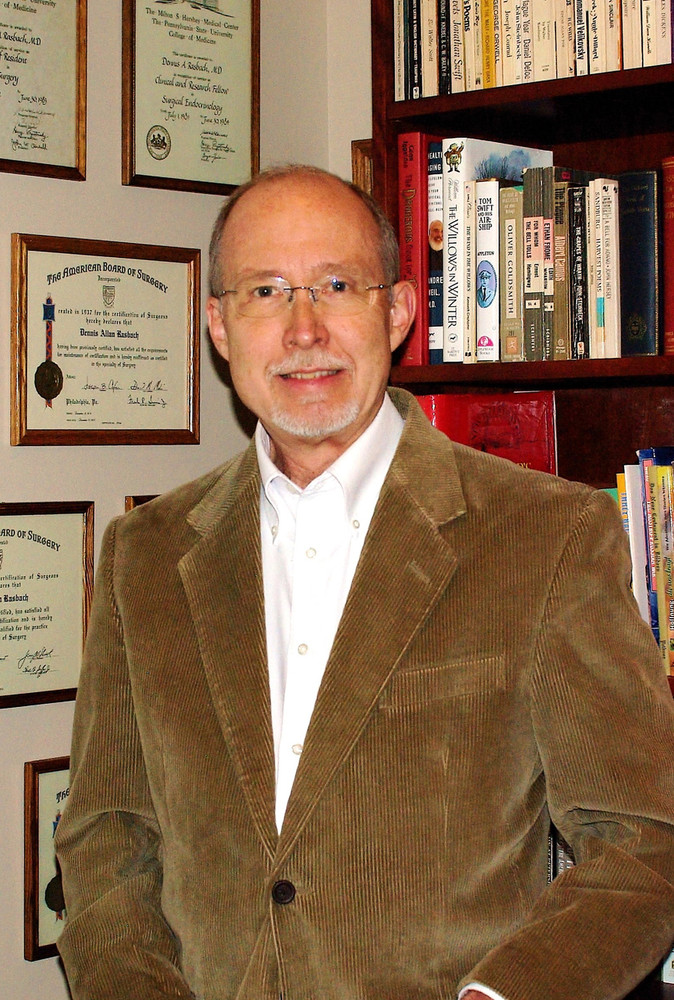 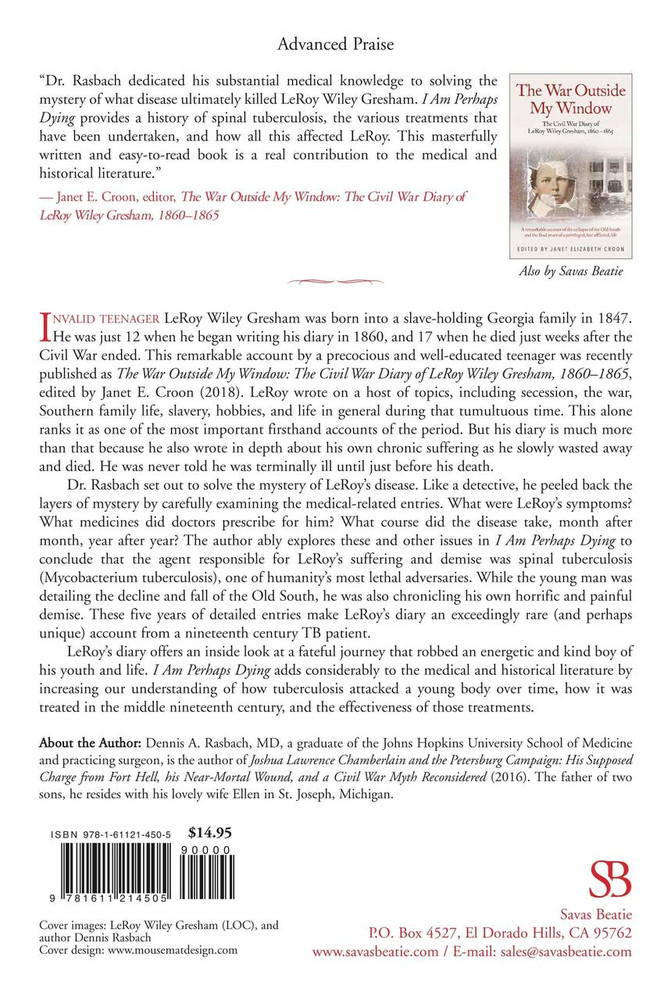 I Am Perhaps Dying: The Medical Backstory of Spinal Tuberculosis Hidden in the Civil War Diary of LeRoy Wiley Gresham

Invalid teenager Leroy Wiley Gresham left a seven-volume diary spanning the years of secession and the Civil War (1860-1865). He was just 12 when he began and he died at 17, just weeks after the war ended. His remarkable account, recently published as The War Outside My Window: The Civil War Diary of LeRoy Wiley Gresham, 1860-1865, edited by Janet E. Croon (2018), spans the gamut of life events that were of interest to a precocious and well-educated Southern teenager—including military, political, religious, social, and literary matters of the day. This alone ranks it as an important contribution to our understanding of life and times in the Old South. But it is much more than that. Chronic disease and suffering stalk the young writer, who is never told he is dying until just before his death.

Dr. Rasbach, a graduate of Johns Hopkins medical school and a practicing general surgeon with more than three decades of experience, was tasked with solving the mystery of LeRoy’s disease. Like a detective, Dr. Rasbach peels back the layers of mystery by carefully examining the medical-related entries. What were LeRoy’s symptoms? What medicines did doctors prescribe for him? What course did the disease take, month after month, year after year? The author ably explores these and other issues in I Am Perhaps Dying to conclude that the agent responsible for LeRoy’s suffering and demise turns out to be Mycobacterium tuberculosis, a tiny but lethal adversary of humanity since the beginning of recorded time.

In the second half of the nineteenth century, tuberculosis was the deadliest disease in the world, accounting for one-third of all deaths. Even today, a quarter of the world’s population is infected with TB, and the disease remains one of the top ten causes of death, claiming 1.7 million lives annually, mostly in poor and underdeveloped countries.

While the young man was detailing the decline and fall of the Old South, he was also chronicling his own horrific demise from spinal TB. These five years of detailed entries make LeRoy’s diary an exceedingly rare (and perhaps unique) account from a nineteenth century TB patient. LeRoy’s diary offers an inside look at a fateful journey that robbed an energetic and likeable young man of his youth and life. I Am Perhaps Dying adds considerably to the medical literature by increasing our understanding of how tuberculosis attacked a young body over time, how it was treated in the middle nineteenth century, and the effectiveness of those treatments.

"A unique and extraordinary study that will prove to be a valued and enduringly appreciated addition to college and university library American Medical History collections in general, and Spinal Tuberculosis supplemental studies reading lists in particular." - Midwest Book Review

"An important contribution to our understanding of life and times in the Old South." - Civil War Book Review

Dr. Dennis Rasbach's I Am Perhaps Dying: The Medical Backstory of Spinal Tuberculosis Hidden in the Civil War Diary of LeRoy Wiley Gresham is an astonishing piece of medical mystery solving, not to mention medical history. It is one of those short (112 pages paperback, but also on my Kindle) that will appeal to a wide audience due to its unique content.

From the medical history standpoint the book offers us the only known example of the documentation of the progress of a disease and its treatments from early onset to the death of the patient. Beyond the obvious great value to medical historians and current infectious disease specialists, the book has greater value. Anthropologists and archaeologists will find this a unique reference source for the explanation of now lost medical terms and patent medicines - and even those cursed privy diggers will find a ready reference to patent medicine bottles - ok, as will archaeologists as well. So much for the academic value of Rasbach's work - there is a very human story here as well. The book is based on the journals of LeRoy Gresham, the son of a wealthy Macon, Ga. plantation owner as the opening months of the looming Civil War find him on the way to Philadelphia to seek treatment for 'injuries' received when the chimney in the ruins of burned house fall on him. It is never clear in the journals what the true nature of LeRoy's condition is. Virginia based writer Janet Croon has edited the journals into a book from noted civil war history publishing house Savas-Beatie. Editor Theodore Savas was drawn into LeRoy's heart-rending story. He asked Rasbach if he could makes sense of the myriad entries about treatments, strange medical concoctions and the symptoms that LeRoy so graphically describes. Rasbach came to only one conclusion - LeRoy's parent's were not telling him that he was suffering from tuberculosis. The 'white plague' of the 19th century, TB was only treatable by the 1950s. Almost eradicated - it is now making a comeback in the form of drug resistant bacterial strains.

The result was Rasbach's book, a fascinating example of medical sleuthing. It is also a must have companion book to Jan Croon's new book, The War Outside My Window.

“Dr. Rasbach dedicated his substantial medical knowledge to solving the mystery of what disease ultimately killed LeRoy Wiley Gresham. I Am Perhaps Dying provides a history of spinal tuberculosis, the various treatments that have been undertaken, and how all this affected LeRoy. This masterfully written and easy-to-read book is a real contribution to the medical and historical literature.” — Janet E. Croon, editor, The War Outside My Window: The Civil War Diary of LeRoy Wiley Gresham, 1860–1865

Dennis A. Rasbach, MD, a graduate of the Johns Hopkins University School of Medicine, is a practicing surgeon. He is a member of the Civil War Round Table of Southwest Michigan and the author of Joshua Lawrence Chamberlain and the Petersburg Campaign: His Supposed Charge from Fort Hell, his Near-Mortal Wound, and a Civil War Myth Reconsidered (2016). The father of two sons, he resides with his wife Ellen in St. Joseph, Michigan.

The War Outside My Window: The Civil War Diary of LeRoy Wiley Gresham, 1860-1865 (J. E. Croon, ed.): A Comprehensive Curriculum Guide for Teachers