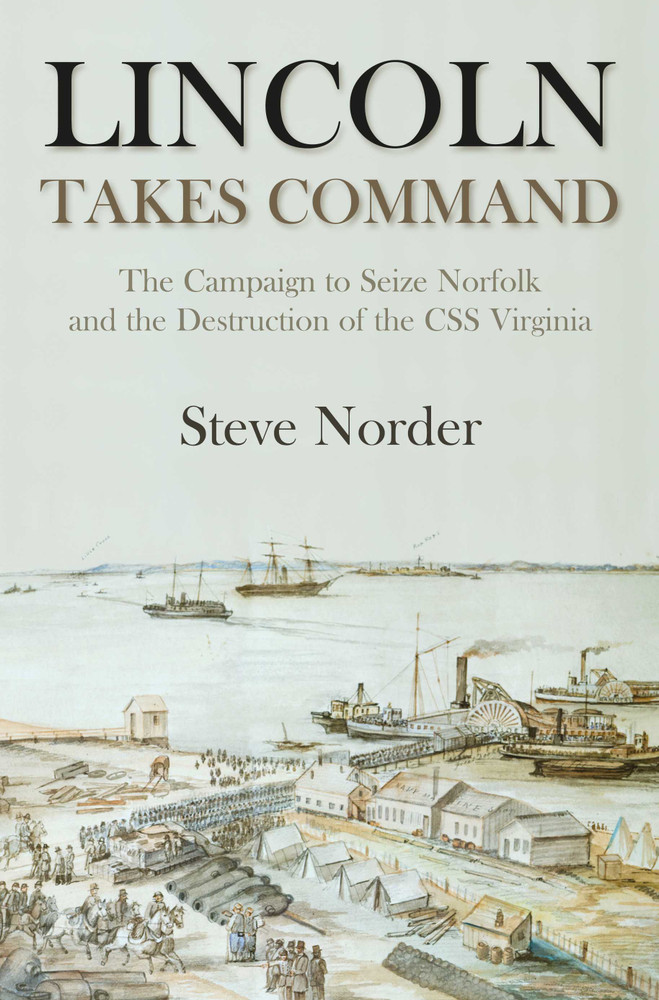 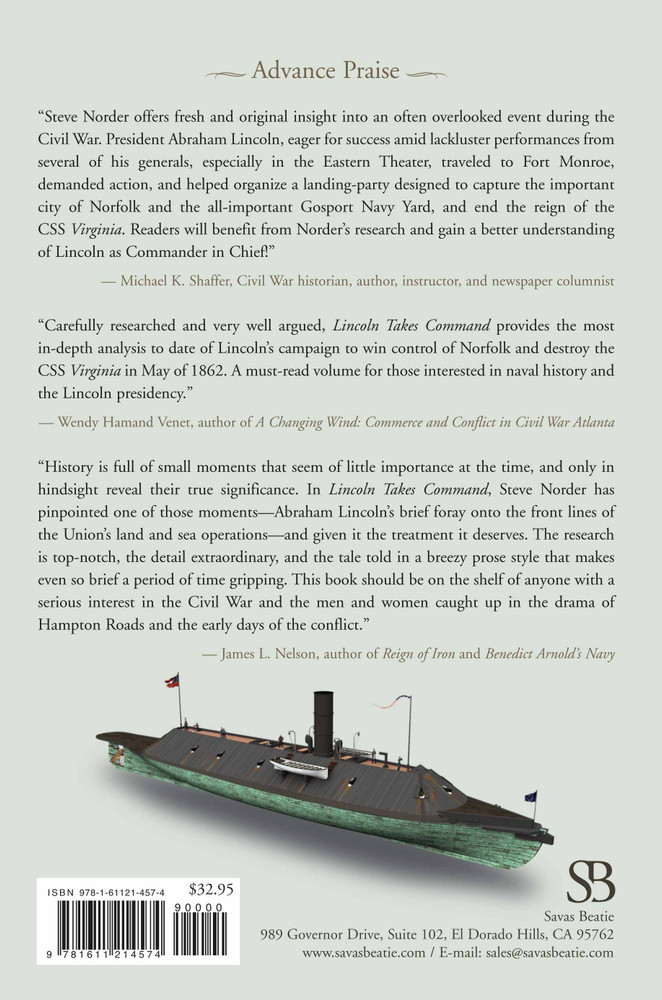 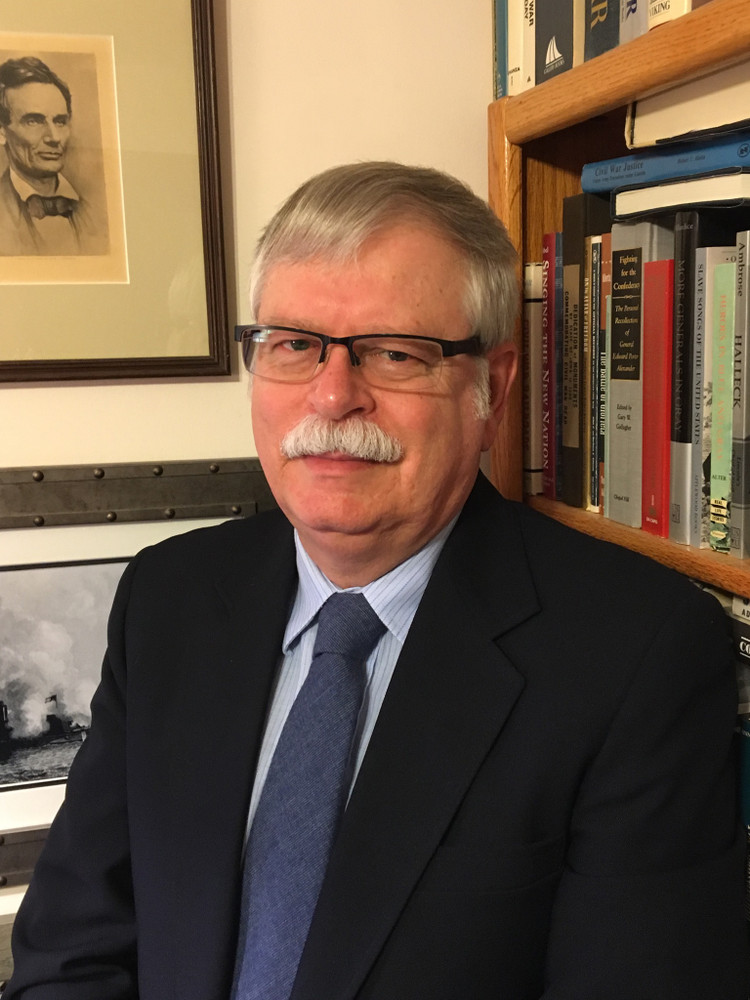 Lincoln Takes Command: The Campaign to Seize Norfolk and the Destruction of the CSS Virginia

4. Back image of a digital model of the CSS Virginia (on back jacket cover and its awesome)

On a rainy evening during the Civil War’s second May, President Abraham Lincoln and two of his cabinet secretaries boarded a treasury department ship to sail to Union-held Fort Monroe in Hampton Roads, Virginia. The trip resulted in the first and only time in the country’s history that a sitting president took direct control of military forces, both army and navy, to wage a campaign with wide-ranging consequences. This little-known slice of the war and its effect on the president is the subject of Steve Norder’s Lincoln Takes Command: The Campaign to Seize Norfolk and the Destruction of the CSS Virginia.

For five days that May, Lincoln studied maps, suggested military actions and—in his quiet, respectful way—issued direct orders to subordinate commanders. Helped by movements farther up the Virginia peninsula, the president’s decisions resulted in a host of military actions and successes, including: a naval bombardment of a Confederate fort, the sailing of Union ships up the James River closer to the enemy capital, an amphibious landing of Union soldiers, the capture of Norfolk and the vital Portsmouth and Gosport navy yards, and the destruction of the Rebel ironclad CSS Virginia. Salmon P. Chase, Lincoln’s treasury secretary, described the actions as a “brilliant week’s campaign.” The president returned to Washington in triumph, hailed as a military and civilian leader. Indeed, some urged him to take direct command of the nation’s field armies.

Norder’s years-long investigation draws upon a host of primary sources, including letters, diaries, official reports, and memoirs. This rich blending of material allows for a fresh perspective and interesting insights.

Untold numbers of books have been penned about Abraham Lincoln, his presidency, and his struggles during the Civil War, but the fascinating week within the covers of Lincoln Takes Command—which helped shape him as a war president—has never has been told in such full detail. The successes that crowned his short time in Hampton Roads changed the nation’s commander in chief by giving him more of an understanding and confidence in his ability to see what needed to be accomplished, insight that sustained him through the rest of the war.

“Steve Norder offers fresh and original insight into an often overlooked event during the Civil War. President Abraham Lincoln, eager for success amid lackluster performances from several of his generals, especially in the Eastern Theater, traveled to Fort Monroe, demanded action, and helped organize a landing-party designed to capture the important city of Norfolk and the all-important Gosport Navy Yard, and end the reign of the CSS Virginia. Readers will benefit from Norder’s research and gain a better understanding of Lincoln as Commander in Chief!” — Michael K. Shaffer, Civil War historian, author, instructor, and newspaper columnist

“Carefully researched and very well argued, Lincoln Takes Command provides the most in-depth analysis to date of Lincoln’s campaign to win control of Norfolk and destroy the CSS Virginia in May of 1862. A must-read volume for those interested in naval history and the Lincoln presidency.” — Wendy Hamand Venet, author of A Changing Wind: Commerce and Conflict in Civil War Atlanta

“History is full of small moments that seem of little importance at the time, and only in hindsight reveal their true significance. In Lincoln Takes Command, Steve Norder has pinpointed one of those moments—Abraham Lincoln’s brief foray onto the front lines of the Union’s land and sea operations—and given it the treatment it deserves. The research is top-notch, the detail extraordinary, and the tale told in a breezy prose style that makes even so brief a period of time gripping. This book should be on the shelf of anyone with a serious interest in the Civil War and the men and women caught up in the drama of Hampton Roads and the early days of the conflict” — James L. Nelson, author of Reign of Iron and Benedict Arnold’s Navy

"Very accessible. . . . a commendable end result of much original research, which can be rare in the crowded study of the Civil War." - Emerging Civil War

"Recommended for those interested in combined arms operations during the Civil War, fans of lesser known actions occurring at the same time as “main events,” and those looking to fill gaps in their knowledge." - TOCWOC – A Civil War Blog
"A unique and very special contribution." - Midwest Book Review
"A superb addition in understanding the dramatic shifting of the war’s shape and scale in the year after the Confederate bombardment of Fort Sumter." - Naval Historical Foundation
“Norder tells this tale well, adequately covering the Confederate side of the matter, and explains technical issues that may be unfamiliar to most readers. In addition, Norder includes an appendix with brief profiles of many of the people who took part in these events, most of whom are today largely forgotten.” - NYMAS Review, New York Military Affairs Symposium

Steve Norder has worked as a genealogist, teacher, author, newspaper reporter, and book editor. He has a strong interest in researching and writing about the tragic Civil War years, and his work has appeared in many places, including Civil War Times, Illustrated. Steve is originally from Iowa but currently resides in Georgia, where he is a member of the Civil War Round Table of Atlanta.