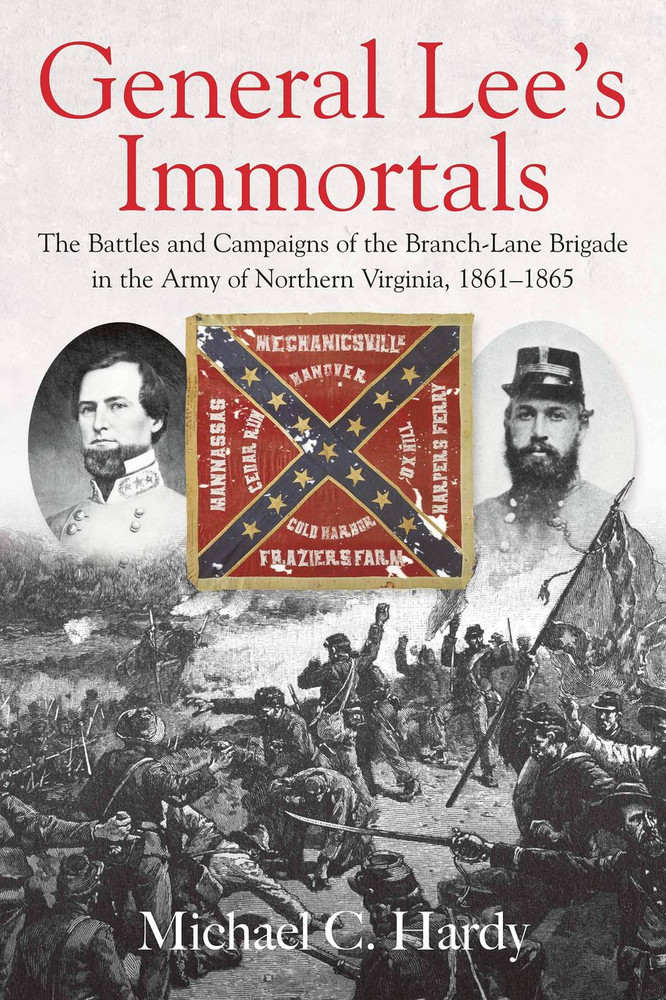 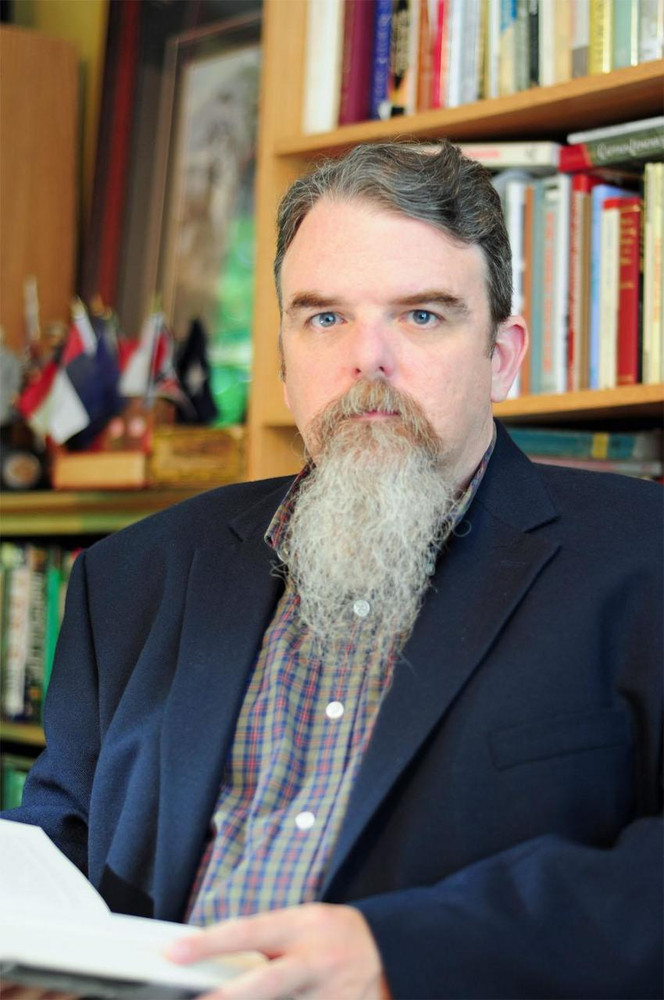 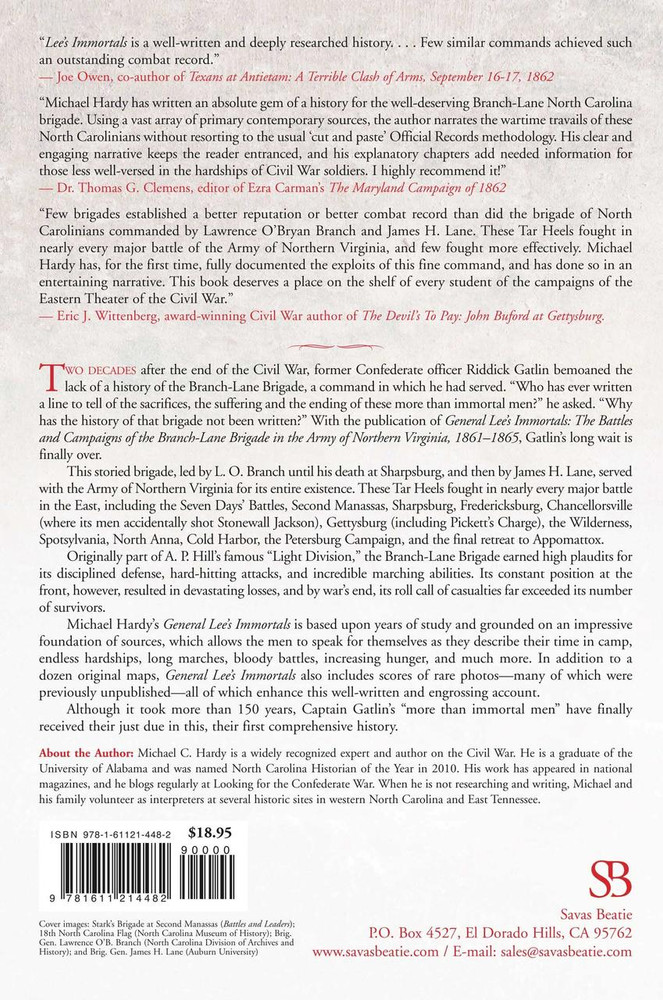 Two decades after the end of the Civil War, former Confederate officer Riddick Gatlin, Jr. bemoaned the lack of a history of the Branch-Lane Brigade, a command in which he had served. “Who has ever written a line to tell of the sacrifices, the suffering and the ending of these more than immortal men?” he asked. “Why has the history of that brigade not been written?” With the publication of General Lee’s Immortals: The Battles and Campaigns of the Branch-Lane Brigade in the Army of Northern Virginia, 1861-1865, Gatlin’s long wait is finally over.

This storied brigade was first led by Lawrence Branch, and then by James H. Lane, and served with Lee’s Army of Northern Virginia for its entire existence. These Tar Heels fought in nearly every major battle in the Eastern Theater, including the Seven Days’ Battles, Second Manassas, Sharpsburg (where Branch was killed), Fredericksburg, Chancellorsville (where its members mistakenly shot Stonewall Jackson), Gettysburg (including Pickett’s Charge), the Wilderness, Spotsylvania, North Anna, Cold Harbor, the Petersburg Campaign, and the final retreat to Appomattox.

Michael Hardy’s General Lee’s Immortals is based upon years of study and grounded on an impressive foundation of sources, which allows the men to speak for themselves as they describe their time in camp, endless hardships, long marches, bloody battles, increasing hunger, and much more. In addition to a dozen original maps, General Lee’s Immortals also includes scores of rare photos—many of which were previously unpublished—all of which enhance this well-written and engrossing account.

Although it took more than 150 years, Captain Gatlin’s “more than immortal men” have finally received their just due in this, their first comprehensive history.

"This is a book with much to offer a variety of audiences. Dedicated students of the Army of Northern Virginia, the Eastern Theater, and North Carolina’s role in the Civil War should consider it essential reading. Beyond those audiences, Michael Hardy’s considerable expertise ensures that this volume has something new to teach readers and scholars with a variety of interests. Combining rigorous research and an innovative organization, General Lee’s Immortals demonstrates what an exceptional unit history can teach us about the Civil War." - The Civil War Monitor

"Michael Hardy is easily one of the most prolific authors of North Carolina Civil War history. He's published books of all types, from detailed battle treatments to unit studies and local history. This 'first comprehensive history of the Branch-Lane Brigade,' his new book General Lee's Immortals examines the fighting career of one of the Army of Northern Virginia's most distinguished formations." - Civil War Books and Authors

“Michael Hardy’s Lee’s Immortals is a well-written and deeply researched history of the Branch-Lane North Carolina brigade. It captures perfectly its intense four years of service with the Army of Northern Virginia. Few similar commands achieved such an outstanding combat record." - Joe Owen, co-author of Texans at Antietam: A Terrible Clash of Arms, September 16–17, 1862

“Michael Hardy has written an absolute gem of a history for the well-deserving Branch- Lane North Carolina brigade. Using a vast array of primary contemporary sources, the author narrates the wartime travails of these North Carolinians without resorting to the usual ‘cut and paste’ Official Records methodology. His clear and engaging narrative keeps the reader entranced, and his explanatory chapters add needed information for those less well-versed in the hardships of Civil War soldiers. I highly recommend it!” - Dr. Thomas G. Clemens, editor of Ezra Carman’s The Maryland Campaign of 1862

“Few brigades established a better reputation or better combat record than did the brigade of North Carolinians commanded by Lawrence O’Bryan Branch and James H. Lane. These Tar Heels fought in nearly every major battle of the Army of Northern Virginia, and few fought more effectively. Michael Hardy has, for the first time, fully documented the exploits of this fine command, and has done so in an entertaining narrative. This book deserves a place on the shelf of every student of the campaigns of the Eastern Theater of the Civil War.” - Eric J. Wittenberg, award-winning Civil War author of The Devil’s to Pay

Michael C. Hardy is a widely recognized expert and author on the Civil War. He is a graduate of the University of Alabama and was named North Carolina Historian of the Year in 2010. His work has appeared in national magazines, and he blogs regularly at Looking for North Carolina’s Civil War. When he is not researching and writing, Michael and his family volunteer as interpreters at several historic sites in western North Carolina and East Tennessee.