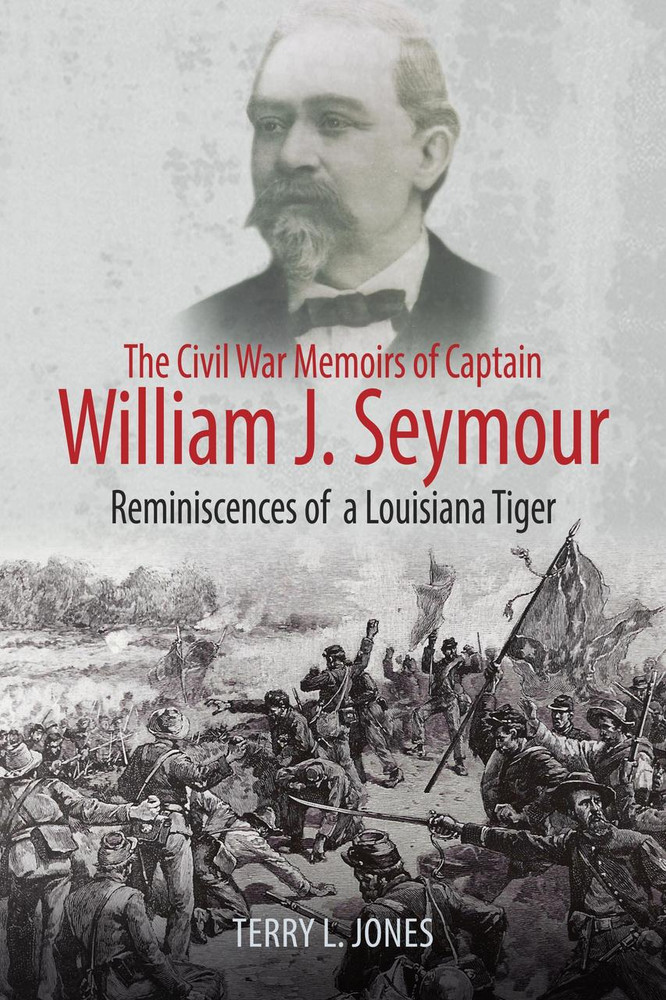 Get the e-book here!

Like many other soldiers who fought in the Civil War, New Orleans newspaper editor William J. Seymour left behind an account of his wartime experiences. It is the only memoir by any field or staff officer of the famous 1st Louisiana Brigade (Hays’ Brigade) in the Army of Northern Virginia. Long out of print, The Civil War Memoirs of Captain William J. Seymour: Reminiscences of a Louisiana Tiger is available once more in this updated and completely revised edition by award-winning author Terry L. Jones

Seymour’s invaluable narrative begins with his service as a volunteer aide to Confederate Gen. Johnson K. Duncan during the 1862 New Orleans campaign. Utilizing his journalistic background and eye for detail, Seymour recalls in great detail the siege of Fort Jackson (the only Southern soldier’s account except for official reports), the bickering and confusion among Confederate officers, and the subsequent mutiny and surrender of the fort’s defenders. Jailed after the fall of New Orleans for violating Maj. Gen. Ben Butler’s censorship order, Seymour was eventually released and joined General Hays’ staff in Virginia

Seymour’s memoirs cover his experiences in the army of Northern Virginia in great detail, including the campaigns of Chancellorsville, Gettysburg, Wilderness, and Shenandoah Valley, ending with the Battle of Cedar Creek in 1864. His pen recounts the activities of the Louisiana Brigade while offering a critical analysis of the tactics and strategies employed by the army

A perceptive and articulate officer, Seymour left behind an invaluable account of the Civil War’s drudgery and horror, pomp and glory. Terry L. Jones’ spare and judicious editing enhances Seymour’s memoirs to create an indispensable resource for Civil War historians and enthusiasts.

“It is a significant source and a readable narrative. Jones deserves credit for making it more widely available.” — Richard J. Sommers, author of Richmond Redeemed: The Siege of Petersburg, The Battles of Chaffin’s Bluff and Poplar Spring Church, September 29–October 2, 1864

“With an eye for events and details, Seymour was able to capture on paper the big events and little incidents. This is a work that any student of Lee’s army will want to have.” — James I. Robertson Jr., Alumni Distinguished Professor of History, Virginia Tech University

“The intelligence and insight of this work come from a genuine aura of immediacy that few such accounts possess. It will stand as an indispensable primary source in Confederate military history.” — T. Michael Parrish, Linden G. Bowers Professor of American History, Baylor University

Terry L. Jones, a native of Winn Parish, Louisiana, received his Ph.D. in history at Texas A&M University and is professor emeritus of history at the University of Louisiana at Monroe. He has published eight books on the Civil War, two of which were History Book Club selections. Among Jones’ publications are Campbell Brown’s Civil War: With Ewell and the Army of Northern Virginia (2001), Historical Dictionary of the Civil War (2 vols., 2011), and Lee’s Tigers Revisited: The Louisiana Infantry in the Army of Northern Virginia (2017). Jones has also written numerous articles for various publications, including the New York Times and BBC History Magazine, and is an award-winning outdoor writer. He and his wife, Carol, have two daughters, Laura and Amie.

Man of Fire: William Tecumseh Sherman in the Civil War