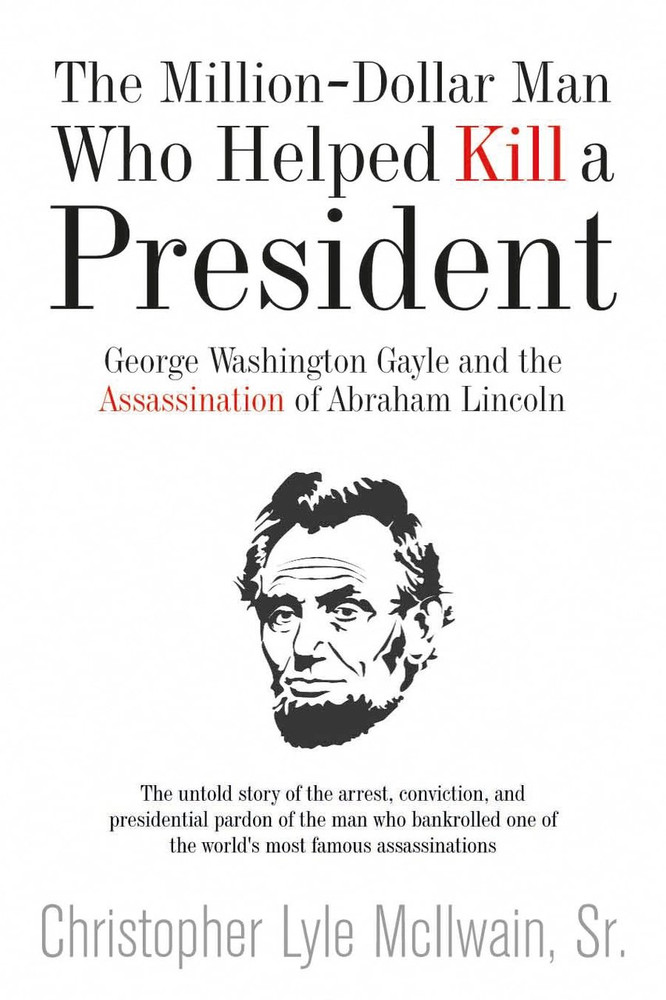 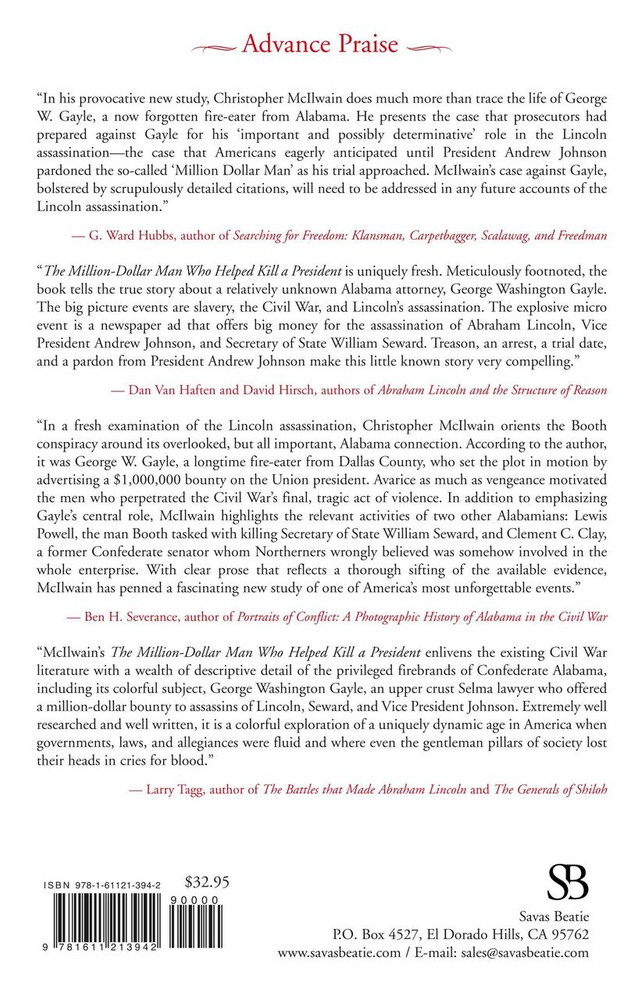 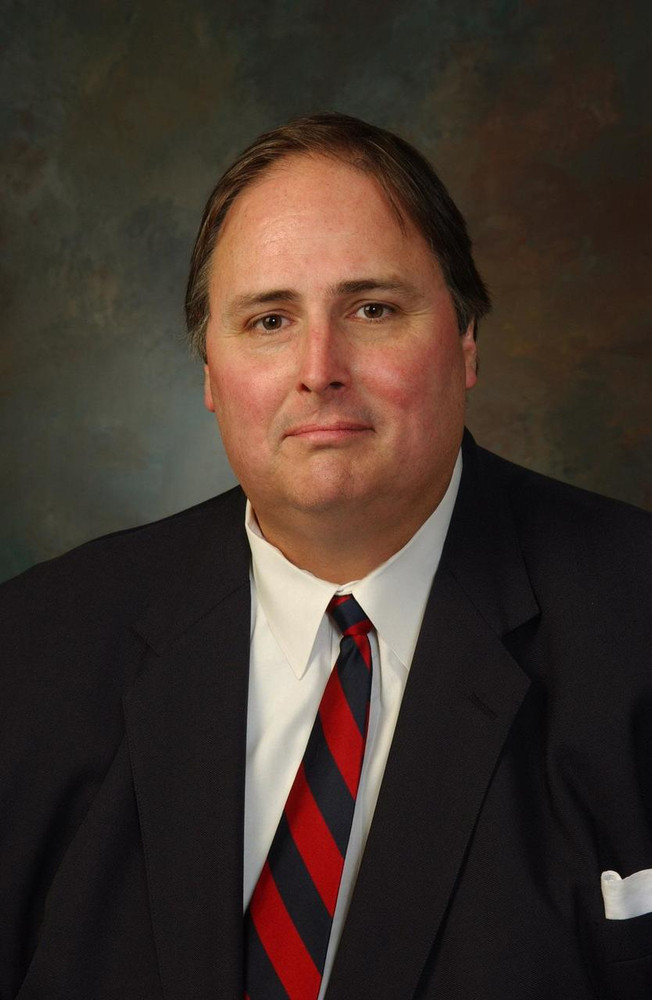 George Washington Gayle is not a name known to history. But it soon will be.

Forget what you thought you knew about why Abraham Lincoln was assassinated by John Wilkes Booth. No, it was not mere sectional hatred, Booth’s desire to become famous, Lincoln’s advocacy of black suffrage, or a plot masterminded by Jefferson Davis to win the war by crippling the Federal government. Christopher Lyle McIlwain, Sr.’s The Million-Dollar Man Who Helped Kill a President: George Washington Gayle and the Assassination of Abraham Lincoln exposes the fallacies regarding each of those theories and reveals both the mastermind behind the plot, and its true motivation.

The deadly scheme to kill Lincoln, Vice President Andrew Johnson, and Secretary of State William Seward was Gayle’s brainchild. The assassins were motivated by money Gayle raised. Lots of money. $20,000,000 in today’s value.

Gayle, a prominent South Carolina-born Alabama lawyer, had been a Unionist and Jacksonian Democrat before walking the road of radicalization following the admission of California as a free state in 1850. Thereafter, he became Alabama’s most earnest secessionist, though he would never hold any position within the Confederate government or serve in its military. After the slaying of the president, Gayle was arrested and taken to Washington, DC in chains to be tried by a military tribunal for conspiracy in connection with the horrendous crimes.

The Northern press was satisfied Gayle was behind the deed—especially when it was discovered he had placed an advertisement in a newspaper the previous December soliciting donations to pay the assassins. There is little doubt that if Gayle had been tried, he would have been convicted and executed. However, he not only avoided trial, but ultimately escaped punishment of any kind for reasons that will surprise readers.

Rather than rehashing what scores of books have already alleged, The Million-Dollar Man Who Helped Kill a President offers a completely fresh premise, meticulous analysis, and stunning conclusions based upon years of firsthand research by an experienced attorney. This original, thought-provoking study will forever change the way you think of Lincoln’s assassination.
Reviews

"...an excellent microhistory of Dallas County, Alabama, and the surrounding area before and during the Civil War." - Civil War Monitor

McIlwain, a lawyer, presents a trove of evidence to suggest who lurked behind the assassination of Abraham Lincoln. . . .  Whether or not the reader accepts the author's case, this book may provide a new historical insight or be classified as an intriguing addition to the varied expression of conspiracy theories. - Civil War Times

A more thoroughly researched true mystery you’ll never read. George Washington Gayle and the Assassination of Abraham Lincoln is no marginal revisionist history. Author and decades long lawyer Christopher Lyle McIlwain, of Tuscaloosa, Alabama, has plumbed the documentary depths of contemporary and modern research into the most notorious assassination of the Nineteenth Century. - John Davis for Mysterious Writings

In his provocative new study, Christopher McIlwain does much more than trace the life of George W. Gayle, a now forgotten fire-eater from Alabama. He presents the case that prosecutors had prepared against Gayle for his ‘important and possibly determinative’ role in the Lincoln assassination—the case that Americans eagerly anticipated until President Andrew Johnson pardoned the so-called ‘Million Dollar Man’ as his trial approached. McIlwain’s case against Gayle, bolstered by scrupulously detailed citations, will need to be addressed in any future accounts of the Lincoln assassination. — G. Ward Hubbs, author of Searching for Freedom: Klansman, Carpetbagger, Scalawag, and Freedman

The Million-Dollar Man Who Helped Kill a President is uniquely fresh. Meticulously footnoted, the book tells the true story about a relatively unknown Alabama attorney, George Washington Gayle. The big picture events are slavery, the Civil War, and Lincoln’s assassination. The explosive micro event is a newspaper ad that offers big money for the assassination of Abraham Lincoln, Vice President Andrew Johnson, and Secretary of State William Seward. Treason, an arrest, a trial date, and a pardon from President Andrew Johnson make this little known story very compelling. — Dan Van Haften and David Hirsch, authors of Abraham Lincoln and the Structure of Reason

In a fresh examination of the Lincoln assassination, Christopher McIlwain orients the Booth conspiracy around its overlooked, but all important, Alabama connection. According to the author, it was George W. Gayle, a longtime fire-eater from Dallas County, who set the plot in motion by advertising a $1,000,000 bounty on the Union president. Avarice as much as vengeance motivated the men who perpetrated the Civil War’s final, tragic act of violence. In addition to emphasizing Gayle’s central role, McIlwain highlights the relevant activities of two other Alabamians: Lewis Powell, the man Booth tasked with killing Secretary of State William Seward, and Clement C. Clay, a former Confederate senator whom Northerners wrongly believed was somehow involved in the whole enterprise. With clear prose that reflects a thorough sifting of the available evidence, McIlwain has penned a fascinating new study of one of America’s most unforgettable events. -- Ben H. Severance, author of Portraits of Conflict: A Photographic History of Alabama in the Civil War

McIlwain’s The Million-Dollar Man Who Helped Kill a President enlivens the existing Civil War literature with a wealth of descriptive detail of the privileged firebrands of Confederate Alabama, including its colorful subject, George Washington Gayle, an upper crust Selma lawyer who offered a million-dollar bounty to assassins of Lincoln, Seward, and Vice President Johnson. Extremely well researched and well written, it is a colorful exploration of a uniquely dynamic age in America when governments, laws, and allegiances were fluid and where even the gentleman pillars of society lost their heades in cries for blood. — Larry Tagg, author of The Battles that Made Abraham Lincoln and The Generals of Shiloh

Christopher Lyle McIlwain, Sr., has been practicing law for more than three decades in Tuscaloosa, Alabama. His other passion is the study of nineteenth century history. He is the author of two previous books, Civil War Alabama (U. of Alabama Press, 2016), the winner of the McMillan Prize, and 1865 Alabama: From Civil War to Uncivil Peace (U. of Alabama Press, 2017). Chris has also published several articles in a variety of history journals.

The Unpopular Mr. Lincoln: The Story of America's Most Reviled President