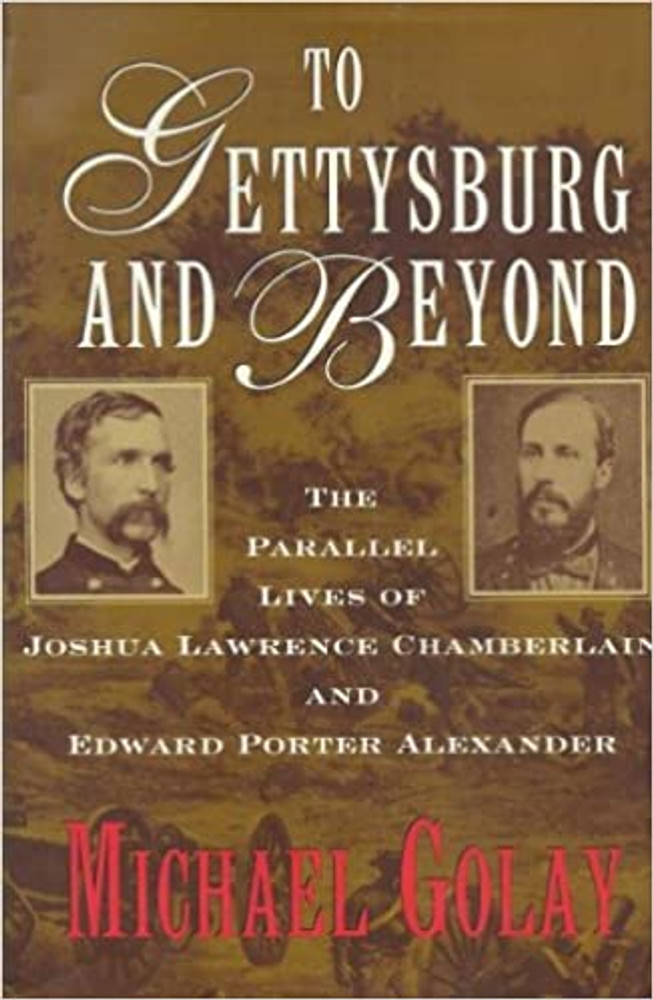 A study of two men who played key roles in the Battle of Gettysburg follows the lives and military careers of Chamberlain, the Union commander who saved the day at Little Round Top, and Alexander, professional artillerist, engineer, and aide to Lee and Longstreet.

Freelance journalist Golay's dual biography of two Civil War colonels, one Union, the other Confederate, dramatizes the differing styles of command of the opposing armies at middle-rank level. Chamberlain (1828-1914) was a gifted recruit who led the 20th Maine regiment and dreamed of personal glory; Alexander (1835-1910), a West Pointer from Georgia, was a practical professional who commanded the artillery in General Robert E. Lee's First Corps. Golay describes how each performed in battle, their actions directly affecting the outcome at Gettysburg (Chamberlain) and Fredericksburg (Alexander). Both enjoyed success in their postwar lives, Chamberlain as governor of Maine, Alexander as a railroad executive; but neither found his work as fulfilling as commanding men in battle. Golay's account of their visits to their former battlefields and their involvement in veterans' affairs offers an unusual perspective on the Civil War. In his analysis of their memoirs (both had "something of a genius for fighting and the later remembering of it"), Golay compares Chamberlain's saccharine Victorian sensibilities with Alexander's pragmatic repudiation of Lost Cause sentimentality.
Copyright 1994 Reed Business Information, Inc.

Chamberlain, a literature professor who framed his world in terms of honor and nobility, enlisted in the Union Army from boredom and quickly mastered the art of war. Alexander, a West Point-trained engineer, was a pragmatic problem solver who became, arguably, the ablest artillery officer of the Confederacy. Both men fought with distinction in many battles, and both have attracted recent biographers (Alice R. Trulock, In the Hands of Providence: Joshua L. Chamberlain and the American Civil War, LJ 6/1/92; Fighting for the Confederacy: Personal Recollections of General Edward Porter Alexander, LJ 9/1/89). Journalist Golay (The Civil War, Facts on File, 1992) combines their stories, arguing that both men found that the glories of war made their peacetime lives disappointing. He writes well, but though he has done his research (most of his footnotes are enlightening), few in his audience won't know the North and South had different names for battles. Furthermore, his thesis seems to fit Chamberlain better than Alexander. This title shouldn't replace biographies of either subject, but it should be considered for good Civil War collections.
Robert C. Moore, Dupont Merck Pharmaceutical Co. Information Svcs., N. Billerica, Mass.
Copyright 1994 Reed Business Information, Inc.

Historical hindsight is always 20/20, as this otherwise thoughtful and well-written comparative biography of two important Civil War commanders shows. On the surface, the lives of Joshua Lawrence Chamberlain of the North and Edward Porter Alexander of the South have little in common. Alexander was a career officer, educated at West Point; Chamberlain was a citizen soldier who taught rhetoric in college before volunteering to fight. Alexander was born on a Virginia plantation; Chamberlain came from rock-ribbed Maine. Beneath these superficial differences, however, Golay (The Civil War, not reviewed) maintains that more united these men than divided them. Both fought in some of the major engagements of the Civil War, and though neither ever rose above middle-level commands, they enjoyed the ear of those more powerful, exerting an influence beyond their rank. Both reached the critical point of their careers at Gettysburg, where Chamberlain's bold defense of Little Round Top arguably saved the battle for the Union, while Alexander's confusion concerning orders and battle strategy led to the disastrous Pickett's charge. Following the war, both men went on to civilian success. Chamberlain became president of Bowdoin College and governor of Maine. Alexander was a successful railroad executive. But neither man, argues Golay--making use of their personal papers and writings--ever escaped his past. The two had found their greatest fulfillment and their true mtier as soldiers in the Civil War, and they both wrote and lectured extensively about their experiences. But the author occasionally judges his subjects with the wisdom of hindsight, as when he claims that the men never really understood the respective causes for which they fought (Alexander thought the war was an inevitable part of the country's evolution; Chamberlain viewed war as, Golay says, ``a test of character''). A riveting portrait of two men who felt they had outlived their historical moment. -- Copyright ©1994, Kirkus Associates, LP. All rights reserved.

Michael Golay teaches history at Phillips Exeter Academy in Exeter, New Hampshire. He is the author of a number of books, including A Ruined Land: The End of the Civil War, a finalist for the Lincoln Prize in American History, The Tide of Empire: America’s March to the Pacific, and Critical Companion to William Faulkner. He lives in Exeter and Old Lyme, Connecticut.