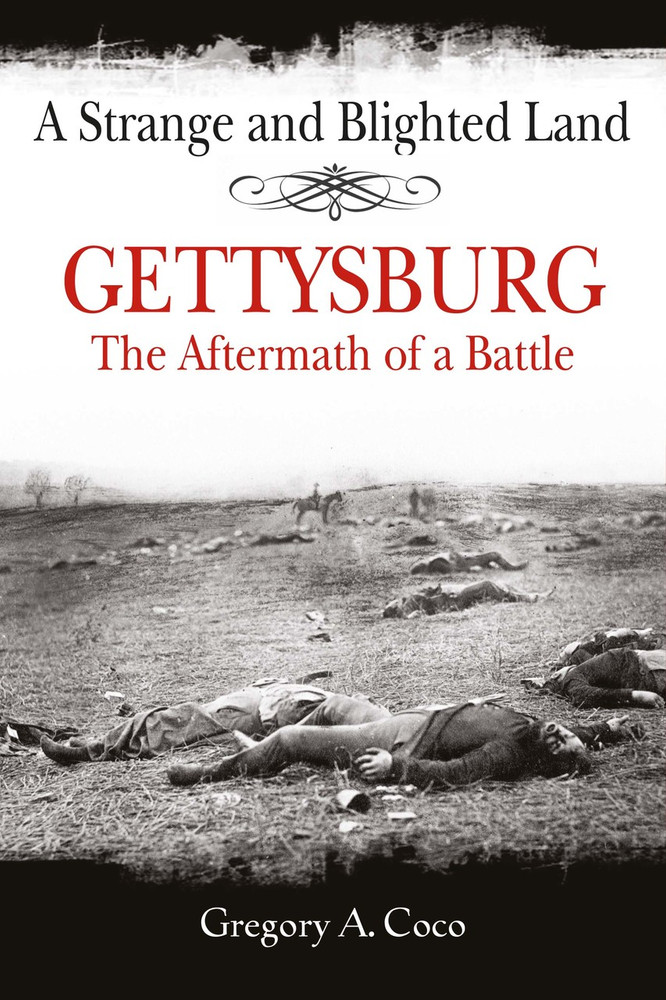 A Strange and Blighted Land: Gettysburg: The Aftermath of a Battle

Gettysburg (July 1-3, 1863) was the largest battle fought on the American continent. Remarkably few who study it contemplate what came after the armies marched away. Who would care for the tens of thousands of wounded? What happened to the thousands of dead men, horses, and tons of detritus scattered in every direction? How did the civilians cope with their radically changed lives? Gregory Coco’s A Strange and Blighted Land. Gettysburg: The Aftermath of a Battle offers a comprehensive account of these and other issues.

The late Coco was a park ranger at Gettysburg deeply interested in the battle and what was left in its wake. The Vietnam veteran who wrote well and often about the battle waxes eloquently about the carnage of war, its terrors and pain, its irreplaceable cost in human life and treasure, and the toll it took on the families who lost sons and husbands there.

Arranged in a series of topical chapters, A Strange and Blighted Land begins with a tour of the battlefield, mostly through eyewitness accounts, of the death and destruction littering the sprawling landscape. Once the size and scope is exposed to readers, Coco moves on to discuss the dead of Gettysburg, North and South, how their remains were handled, and how and why the Gettysburg National Cemetery was established. The treatment of the wounded, Union and Confederate, was organized chaos. Every house and barn became of hospital or medical station, and the medical and surgical practices of the day were little short of compassionate torture. The author also discusses at length how prisoners were handled and the fate of the thousands of stragglers and deserters left behind once the armies left before concluding with the preservation efforts that culminated in the establishment of the Gettysburg National Military Park in 1895.

Coco’s prose is gripping, personal, and brutally honest. There is no mistaking where he comes down on the issue: There was nothing pretty or glorious or romantic about a battle—especially once the fighting ended.

“…gripping, personal, and brutally honest. There was nothing pretty or glorious or romantic about a battle -- especially once the fighting ended. No personal, community, or academic library American Civil War collection can be considered complete or comprehensive without the inclusion of Gregory Coco's "A Strange and Blighted Land".” (Midwest Book Review)

“There is a reason that A Strange and Blighted Land is hailed as one of the greatest Civil War books ever written. . . . No detail is left unturned and what you read might change the way you look at the battle. Gregory A. Coco will always be hailed for this work. And a thank you for Savas Beatie for reprinting it.” – Gettysburg Chronicle

Gregory Ashton Coco, born and raised in Louisiana, lived in the Gettysburg area for nearly 35 years. In 1972, after serving in the U.S. Army, he earned a degree in American History from the University of Southwestern Louisiana. While in the military, Greg spent a tour of duty in Vietnam as a prisoner of war military interrogator and infantry platoon radio operator with the 25th Infantry and received, among other awards, the Purple Heart and Bronze Star. During his years in Gettysburg, Greg worked as a National Park Service Ranger and a Licensed Battlefield Guide. He wrote sixteen books and a dozen scholarly articles on Gettysburg and the Civil War. His A Strange and Blighted Land. Gettysburg: The Aftermath of a Battle was voted #12 in the Top 50 Civil War Books ever written. Greg died at age 62 in February of 2009. In his words, he was “the happy husband of Cindy L. Small for 26 years. He was the fortunate father of daughter, Keri E. Coco. He loved them both with all his heart.” Keri is married to Cail MacLean and they have a daughter, Ashton MacLean Coco.