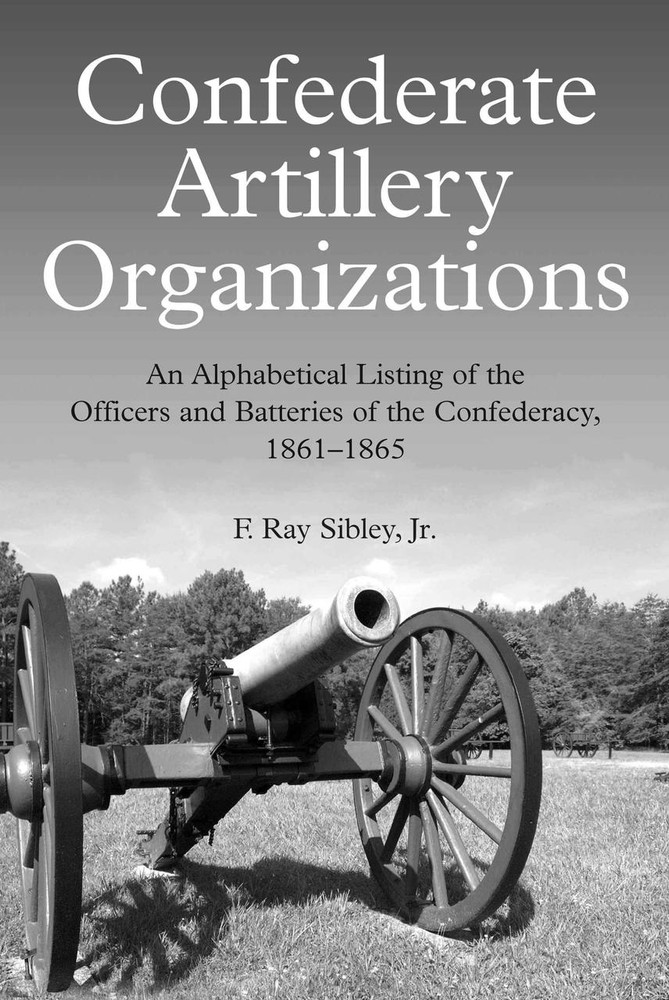 Confederate Artillery Organizations: An Alphabetical Listing of the Officers and Batteries of the Confederacy, 1861-1865

Confederate Artillery Organizations: An Alphabetical Listing of the Officers and Batteries of the Confederacy, 1861–1865 is a remarkable, immensely useful, and exceedingly rare book containing the names of the officers and every Confederate artillery unit. It is so rare that most scholars in the field don’t even know of its existence.

It was originally published as simply Confederate Artillery Organizations by the U.S. War Department in 1898, one of Marcus J. Wright’s compilation aids to help assemble and organize the massive publication that would appear as the 128-volume The War of the Rebellion: A Compilation of the Official Records of the Union and Confederate Armies (1880-1901), known to researchers and students alike as simply Official Records.

Editor Ray Sibley spent more than a decade researching the thousands of entries, correcting mistakes, and adding many artillery units and additional officers unknown to the original compilers more than a century ago. Sibley utilized archival records, manuscripts, letters, diaries, and other sources to verify the original work, correct mistakes, and add further useful information in the form of hundreds of valuable footnotes.

This new updated and easy-to-use reference work sets forth the linage of the Confederate artillery. It lists, in alphabetical order, individual batteries to artillery regiments, the names and alternate names for the batteries and the names of the men who led them. Also included are the dates of acceptance into Confederate service for each unit. Most companies have an annotation that includes an alternate name (if there was one), and the date if a unit disbanded or was merged into another organization. The annotations for officers include date of appointment, date of promotion to a higher grade (if any), date of transfers (if any), date dropped from rolls (if any), and date relieved of command (if any).

Confederate Artillery Organizations also contains four rare and hard-to-find lists of Confederate artillery officers: “Memorandum of Artillery Officers, C. S. A.,” “List of Officers Corps of Artillery, C. S. Army, on U.S. Register of 1861,” “Superintendents of Armories,” and “Military Store-Keeper of Ordnance.” These lists illustrate the ranking of each officer in his respective grade. The extensive bibliography prepared by Mr. Sibley is an invaluable guide to Civil War historiography.

Scholars, researchers, and students of the Civil War will be thankful Ray Sibley turned his considerable talents to this project. His tireless efforts made sure this rare book got back into print (including all digital formats), and turned what was once a valuable rare work into a reference book that is now both widely available and absolutely indispensable.

F. Ray Sibley, Jr. received his undergraduate and graduate degrees from Southeastern Louisiana University in Hammond, Louisiana, and worked for nearly 50 years as an educator in St. Tammany Parish. Ray is the author of a 3-volume set entitled The Confederate Order of Battle: The Army of Northern Virginia (1996), and is currently working on volumes covering the West and the Trans-Mississippi and coastal defenses. He is now retired and spends his time researching and writing, hunting, and growing beautiful day lilies.

The Confederate Military Forces in the Trans-Mississippi West, 1861-1865