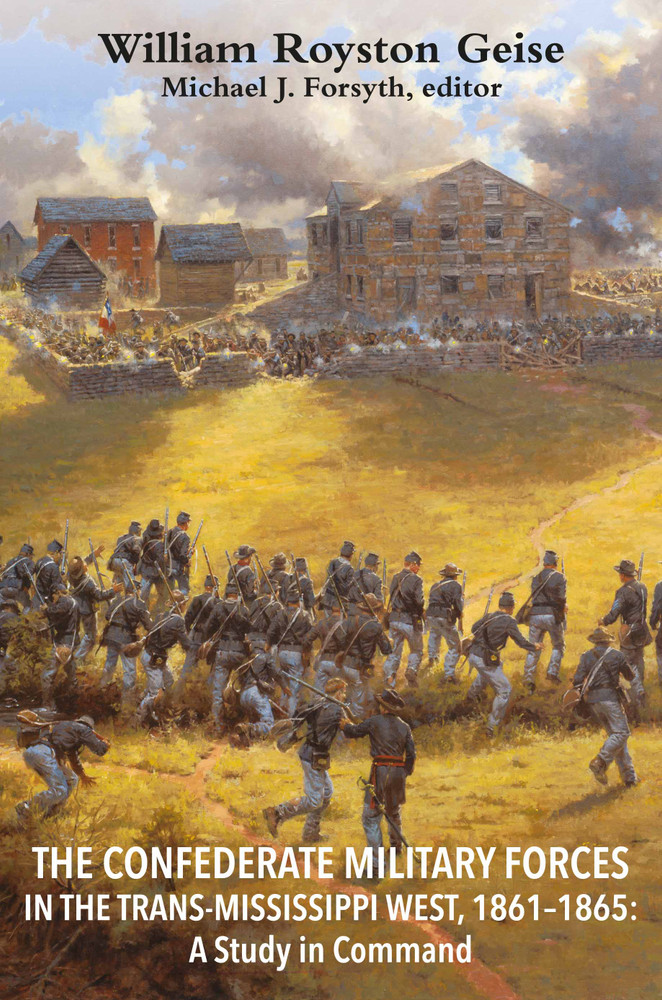 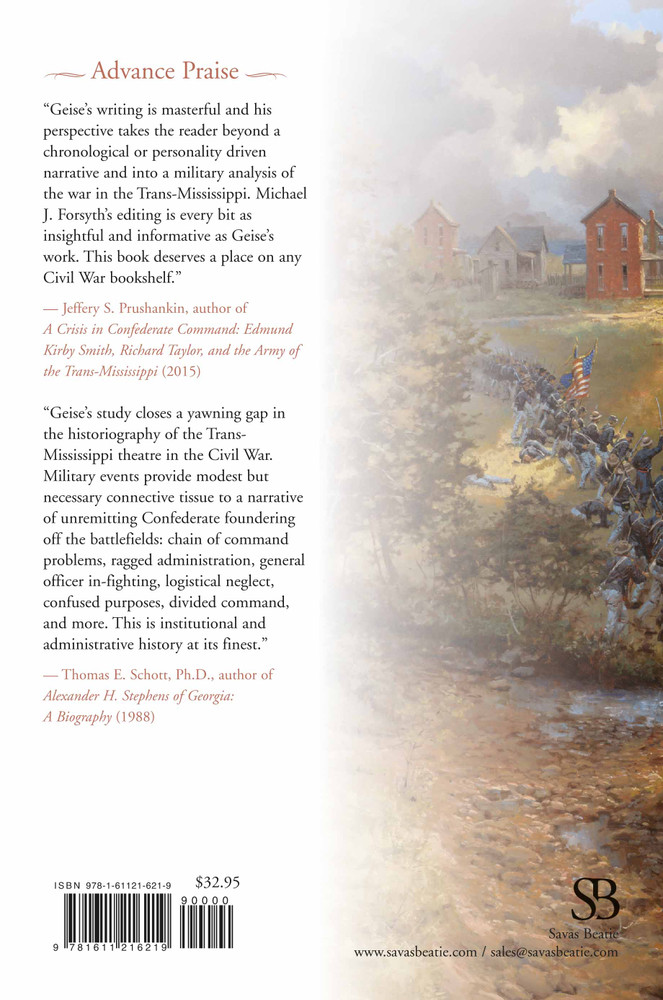 The Confederate Military Forces in the Trans-Mississippi West, 1861-1865

Get your eBook here!

Click HERE to read the Title Page, Table of Contents, Foreword, and Preface

William Royston Geise was a Ph.D. candidate at the University of Texas at Austin in the early 1970s when he researched and wrote The Confederate Military Forces in the Trans-Mississippi West, 1861- 1865: A Study in Command in 1974. Although it remained unpublished, it was not wholly unknown. Deep-diving researchers were aware of Dr. Geise’s work and lamented the fact that it was not widely available to the general public. In many respects, studies of the Trans-Mississippi Theater are only now catching up with Geise.

This intriguing book traces the evolution of Confederate command and how it affected the shifting strategic situation and general course of the war. Dr. Geise accomplishes his task by coming at the question in a unique fashion. Military field operations are discussed as needed, but his emphasis is on the functioning of headquarters and staff—the central nervous system of any military command. This was especially so for the Trans-Mississippi.

After July 1863, the only viable Confederate agency west of the great river was the headquarters at Shreveport. That hub of activity became the sole location to which all isolated players, civilians and military alike, could look for immediate overall leadership and a sense of Confederate solidarity. By filling these needs, the Trans-Mississippi Department assumed a unique and vital role among Confederate military departments and provided a focus for continued Confederate resistance west of the Mississippi River.

The author’s work mining primary archival sources and published firsthand accounts, coupled with a smooth and clear writing style, helps explain why this remote department (referred to as “Kirby Smithdom” after Gen. Kirby Smith) failed to function efficiently, and how and why the war unfolded there as it did.

Trans-Mississippi Theater historian and Ph.D. candidate Michael J. Forsyth (Col., U.S. Army, Ret.) has resurrected Dr. Geise’s smoothly written and deeply researched manuscript from its undeserved obscurity. This edition, with its original annotations and Forsyth’s updated citations and observations, is bolstered with original maps, photographs, and images. Students of the war in general, and the Trans-Mississippi Theater in particular, will delight in its long overdue publication.

“Geise’s writing is masterful and his perspective takes the reader beyond a chronological or personality driven narrative and into a military analysis of the war in the Trans-Mississippi. Michael J. Forsyth’s editing is every bit as insightful and informative as Geise’s work. This book deserves a place on any Civil War bookshelf.”

— Jeffery S. Prushankin, author of A Crisis in Confederate Command: Edmund Kirby Smith, Richard Taylor, and the Army of the Trans-Mississippi (2015)

“Geise’s study closes a yawning gap in the historiography of the Trans-Mississippi theatre in the Civil War. Military events provide modest but necessary connective tissue to a narrative of unremitting Confederate foundering off the battlefields: chain of command problems, ragged administration, general officer in-fighting, logistical neglect, confused purposes, divided command, and more. This is institutional and administrative history at its finest.”

About the Author: William Royston Geise graduated from the Missouri Military Academy in 1936 and was attending the University of Texas at Austin when the Japanese bombed Pearl Harbor. He joined what would become the Air Force and retired as a lieutenant colonel in 1961. He earned Bachelor’s in English from the University of Arizona and his Master’s in English and Ph.D. in American History in 1974 from UT-Austin. Geise taught history at San Antonio College for 15 years and published articles in a variety of periodicals before passing away in 1993. About the Editor: Michael J. Forsyth is a retired U.S. Army field artillery colonel and currently an assistant professor in the Department of Joint, Interagency, and Multinational Operations at the U.S. Army Command and General Staff College. He is a veteran of Operation DESERT STORM, served three tours in Afghanistan, and is a Ph.D. candidate at the Royal Military College of Canada. Michael is the author of many articles and four books, including The Great Missouri Raid: Sterling Price and the Last Major Confederate Campaign in Northern Territory (2015).

Confederate Artillery Organizations: An Alphabetical Listing of the Officers and Batteries of the Confederacy, 1861-1865