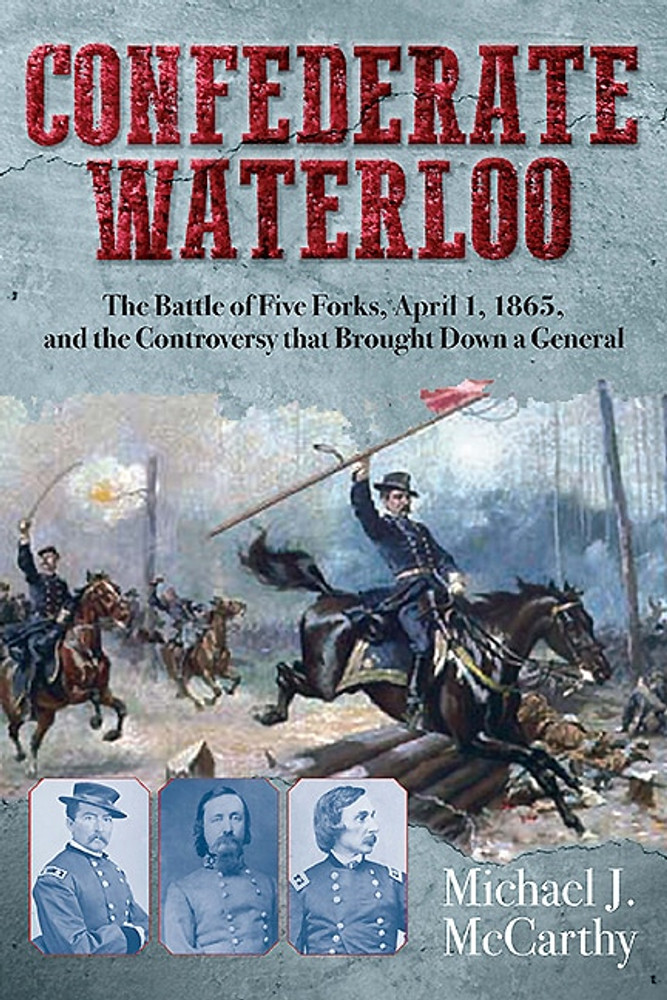 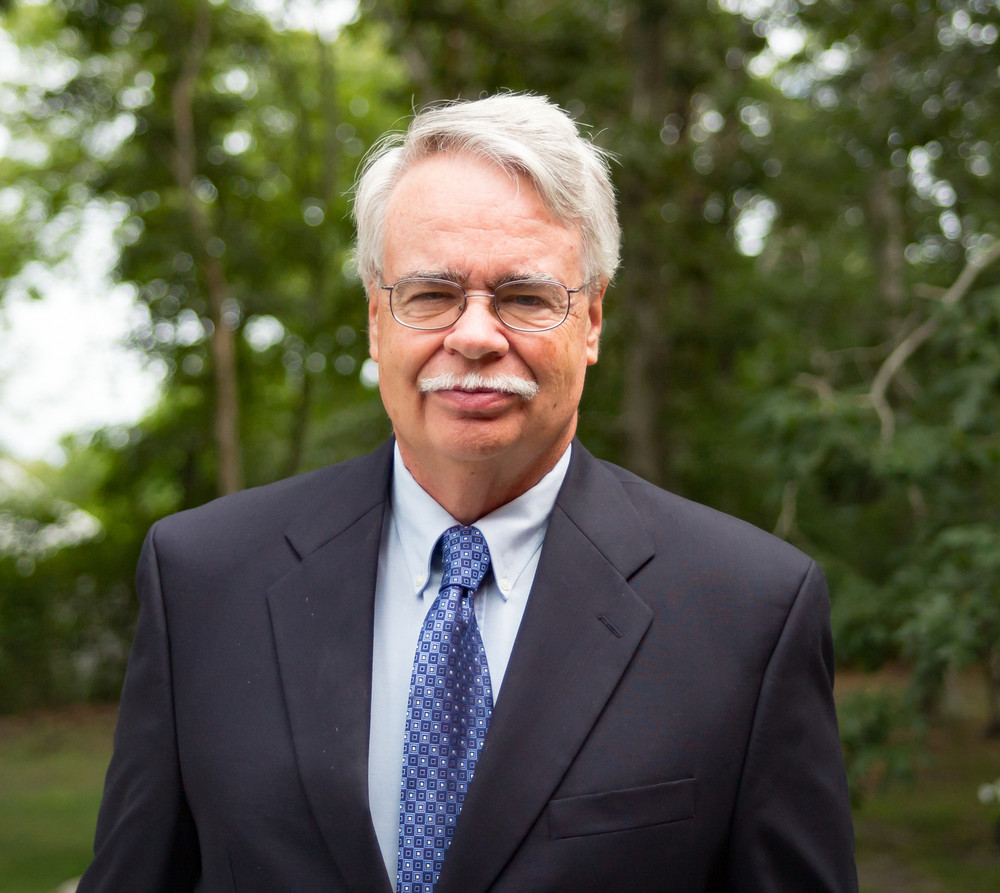 Confederate Waterloo: The Battle of Five Forks, April 1, 1865, and the Controversy that Brought Down a General

“It could be classified as a mere skirmish, but no other fight of the entire four years’ struggle was followed by such important consequences,” explained former Confederate General Thomas Munford years after the Civil War. “It extinguished the campfires of the hitherto invincible army and was the mortal blow which caused the Southern Confederacy to perish forever.” The Battle of Five Forks broke the long siege of Petersburg, triggered the evacuation of Richmond, precipitated the Appomattox Campaign, and destroyed the careers and reputations of two generals. Michael J. McCarthy’s Confederate Waterloo is the first fully researched and unbiased book-length account of this decisive Union victory and the aftermath fought in the courts and at the bar of public opinion.

General Lee’s Army of Northern Virginia had been locked into the sprawling defenses surrounding the logistical stronghold of Petersburg and the Southern capital at Richmond for more than eight months when General Grant struck beyond his far left flank to break the extended Rebel lines. A series of battles led up to April 1, when General Phil Sheridan’s forces struck at Five Forks. The attack surprised and collapsed General George Pickett’s Confederate command and turned Lee’s right flank. An attack along the entire front the following morning broke the siege and forced the Virginia army out of its defenses and, a week later, into Wilmer McLean’s parlor to surrender at Appomattox.

Despite this decisive Union success, Five Forks spawned one of the most bitter and divisive controversies in the postwar army when Sheridan relieved Fifth Corps commander Gouverneur K. Warren for perceived failures connected to the battle. The order generated a life-long effort by Warren and his allies to restore his reputation by demonstrating that Sheridan’s action was both unfair and dishonorable. The struggle climaxed with a Court of Inquiry that generated a more extensive record of testimony and exhibits than any other U.S. military judicial case in the 19th Century. In addition to Sheridan and Warren, participants included Gens. U. S. Grant and Winfield S. Hancock, and a startling aggregation of former Confederate officers.

McCarthy’s Confederate Waterloo is grounded upon extensive research and a foundation of primary sources, including the meticulous records of a man driven to restore his honor in the eyes of his colleagues, his family, and the American public. The result is a fresh dispassionate analysis that may cause students of the Civil War to reassess their views about some of the Union’s leading generals.

"Another fascinating account of a modern day siege during the American Civil War - I think the fact that wecan match photographs to people who actually took part in this conflict makes it something extraordinary, and kindles interest to an amazing degree. Fascinating." (Books Monthly)

“Confederate Waterloo: The Battle of Five Forks, April 1, 1865 and the Controversy that Brought Down a General is a detailed, scholarly analysis of one of the final battles of the American Civil War… Confederate Waterloo draws upon archival research and a wealth of primary sources to present a studious, unbiased account of the entire affair. Black-and-white maps, a bibliography, and an index round out this welcome contribution to public and college library Civil War shelves.” (Midwest Book Review)

“McCarthy’s writing is quick paced and easy to read. The chapters on the court are outstanding. He takes a very complicated subject for a reader, court testimony, and synthesizes it into a very clear narrative. . . . Fascinating and engaging, it is highly recommended.” – Civil War News

“McCarthy’s Confederate Waterloo is really two books: A long-overdue and well-researched telling of the Battle of Five Forks, the Confederate defeat that led to the evacuation of Richmond, and the sad tale of the destruction of the career of V Corps commander Maj. Gen. Gouverneur K. Warren by Maj. Gen. Philip H. Sheridan for Warren’s alleged insubordination. McCarthy carefully documents Warren’s efforts to clear his name, and comes to some interesting conclusions about Sheridan’s actions. This book is highly recommended for any scholar of the Army of the Potomac, the campaigns of the spring of 1865, and for anyone who is interested in seeing injustices rectified.” (Eric Wittenberg, award-winning author (with Scott Mingus Sr.) of The Second Battle of Winchester: The Confederate Victory That Opened the Door to Gettysburg June 13-15, 1863)

“Mike McCarthy’s take on Generals Grant, Sheridan, and Warren comes from the pen of an unjaundiced historian unafraid to let the sources lead the way to the truth of what happened that day so long ago that broke Lee’s tenacious grip on Petersburg and Richmond. I firmly believe careful readers of this volume will agree that Confederate Waterloo: The Battle of Five Forks, April 1, 1865, and the Controversy that Brought Down a General is a fascinating story, beautifully told.” (Bryce Suderow, co-author (with Edwin C. Bearss) of 2-volume The Petersburg Campaign: The Eastern Battles and The Western Battles)

“Mike McCarthy begins this engrossing story with a lengthy review of the events of the final days of Robert E. Lee’s Army of Northern Virginia and the road to Appomattox, including a detailed accounting of the Battle of Five Forks on April 1, 1865. The second half of his book focuses on General Warren’s all-consuming crusade to regain his reputation after being sacked by Phil Sheridan at the climax of victory at Five Forks. McCarthy’s tale of the Court of Inquiry is a true courtroom drama that was front-page news in 1880. From newspapers to personal correspondence to musty court records, McCarthy uses innumerable sources to knit together a story grounded on exhaustive research, good writing, and a fascinating set of characters. Confederate Waterloo is a must-read and something new and different for even the most accomplished readers of US history.” (Mark Silo, author of The 115th New York in the Civil War: A Regimental History)

Michael J. McCarthy is a graduate of LeMoyne College, class of 1969 with a BA in history. He then received his MA in American history from Providence College in 1971. Circumstances led him to a career in government and he received MPA degrees in public finance from the University at Albany and in public management from the Kennedy School of Government at Harvard University. During his long career with New York State he never lost his love of Civil War history, however. As he approached retirement from the position of Assistant Commissioner of the State Department of Transportation, he went back to school and received his Ph.D. in American history from the University at Albany in 2010. His interest in the Battle of Five Forks was kindled during a Capital District Civil War Round Table trip to the battlefield, and this work is a re-edited version of his dissertation.