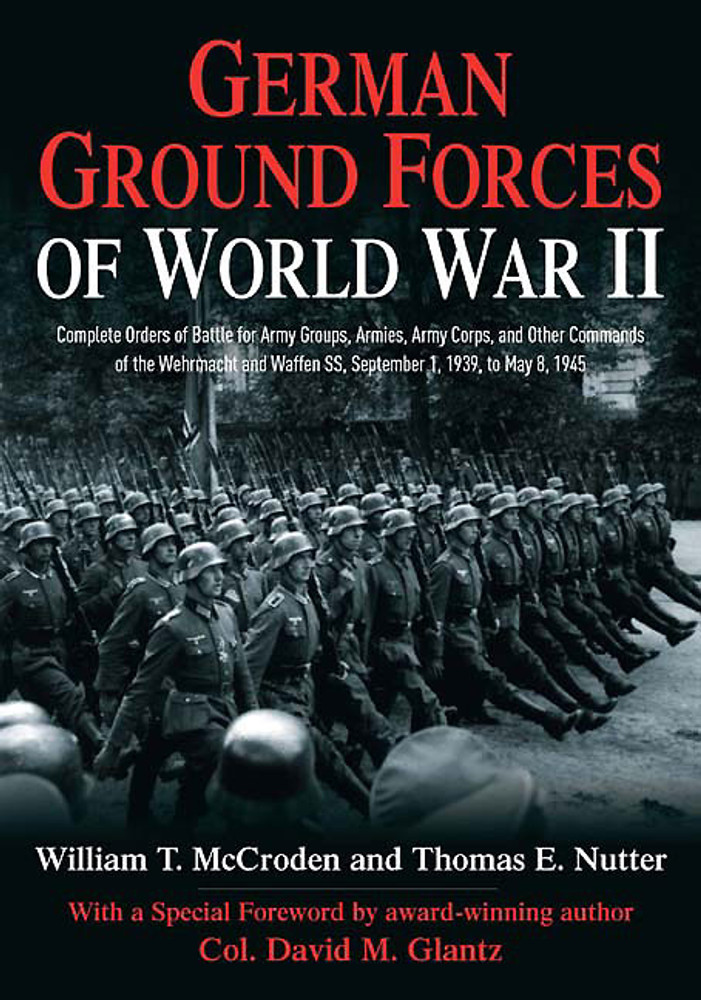 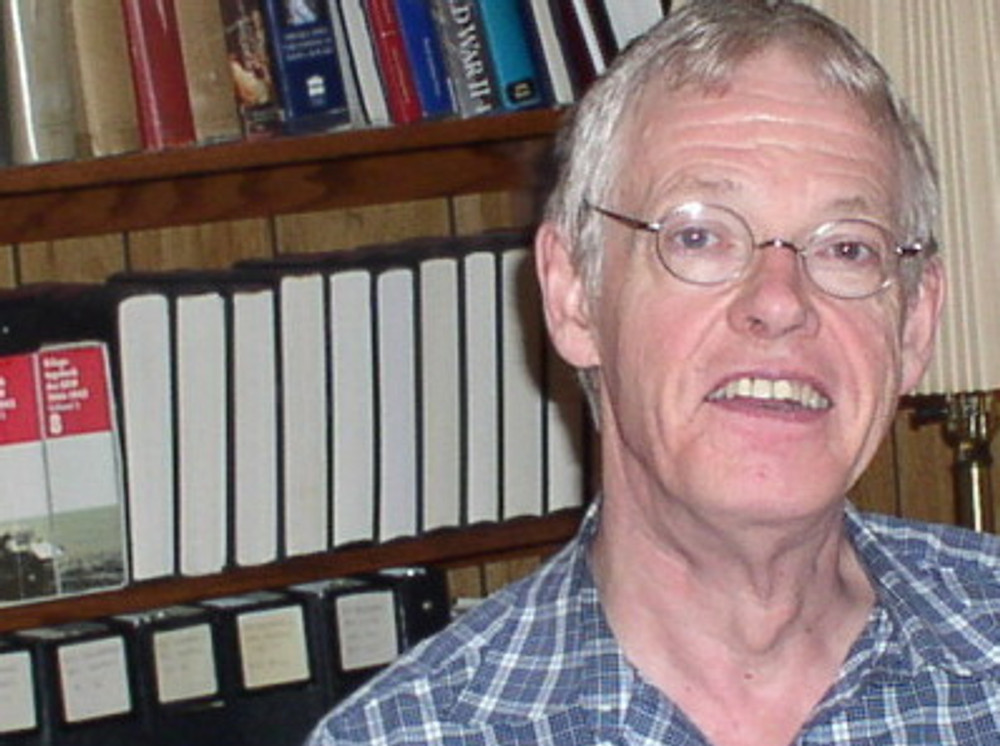 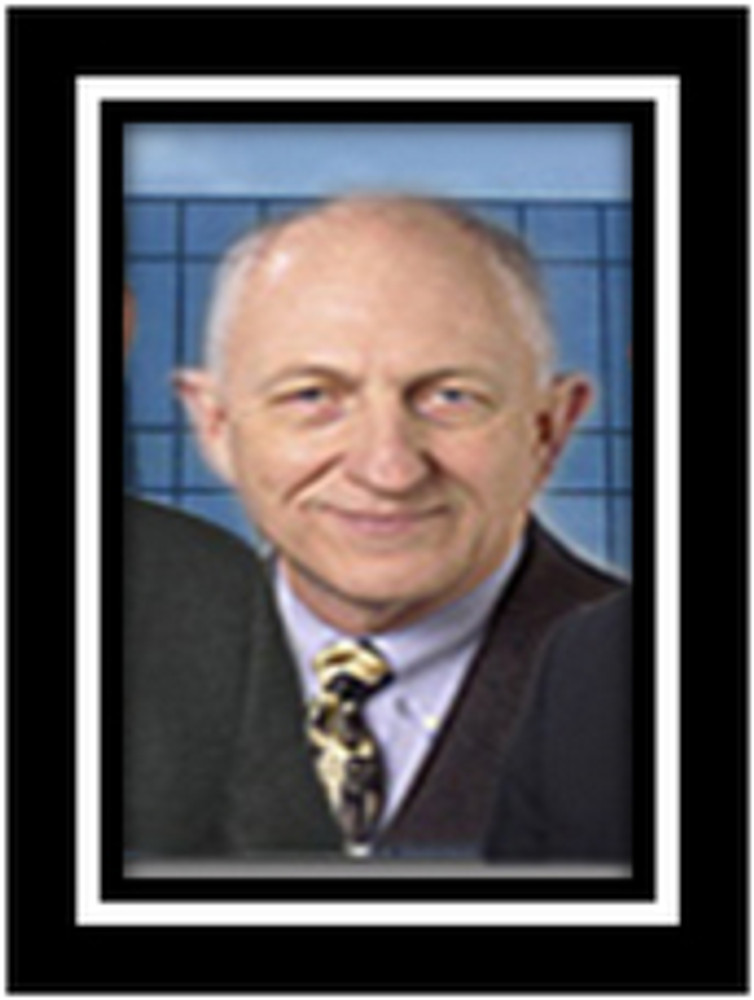 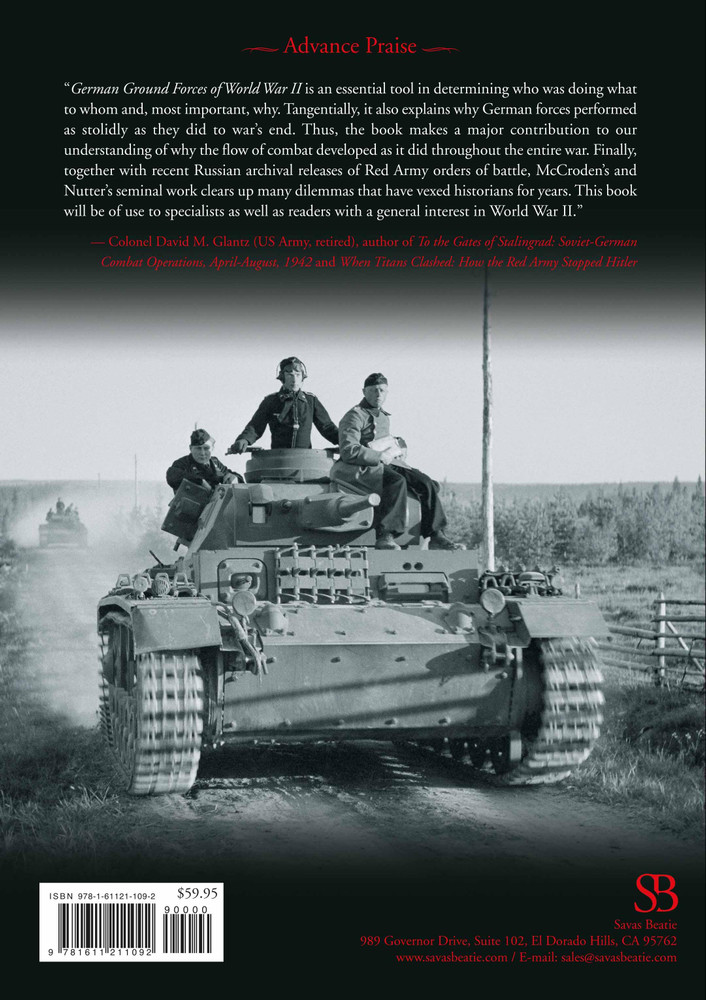 Click HERE to read the Foreword by Col. David Glantz

FROM STONE & STONE: "After decades of effort, William McCroden and Thomas Nutter . . . have accomplished that seemingly impossible task. Working from primary German documents as much as possible, sources practically primary in nature (such as Tessin), and secondary sources ranging from extremely important to rather tangential, the authors have assembled what must rank as the most complete OB for German headquarters published on paper in English." Click HERE for the full review.

The ultimate reference guide/OOB you have been waiting for.

German Ground Forces of World War II offers the first comprehensive order of battle for German ground troops throughout the Second World War, from the invasion of Poland on September 1, 1939, to the destruction of the last remnants of Germany’s Wehrmacht and Waffen SS in Berlin in 1945. Unlike similar works, these orders of battle are dynamic, and so account for the continuously changing character of Germany’s ground forces at war.

This massive new reference work by McCroden and Nutter, broken up in sections including Theater Commands, Army Groups, Armies, and Corps Commands, presents a detailed analysis of each corresponding order of battle for every German field formation above division. Additional new ground is broken by also describing the orders of battle of the myriad German and Axis satellite formations assigned to security commands throughout occupied Europe and the combat zones, as well as those attached to fortress commands and to the commanders of German occupation forces in Eastern and Western Europe. An accompanying narrative describes the career of each field formation and includes the background and experience of many of their most famous commanding officers.

For the first time, readers can follow the career of every German division, corps, army, and army group as the German armed forces shifted units to and from theaters of war, from the period of triumphant successes to the years of grinding defensive warfare and eventual defeat.

"The contents are extensively documented, and at times the notes offer critical commentary on the available evidence . . . reminding us of the important role independent researchers can make to the study of military history." - NYMAS Review

“German Ground Forces of World War II is an essential tool in determining who was doing what to whom and, most important, why. Tangentially, it also explains why German forces performed as stolidly as they did to war’s end. Thus, the book makes a major contribution to our understanding of why the flow of combat developed as it did throughout the entire war. Finally, together with recent Russian archival releases of Red Army orders of battle, McCroden’s and Nutter’s seminal work clears up many dilemmas that have vexed historians for years. This book will be of use to specialists as well as readers with a general interest in World War II.” — Colonel David M. Glantz (US Army, retired), author of To the Gates of Stalingrad: Soviet-German Combat Operations, April-August, 1942 and When Titans Clashed: How the Red Army Stopped Hitler

For years, if not decades, historians attempting to describe accurately operational developments during World War II (1939-1945) and the Soviet-German War (1941-1945), in particular, have struggled to identify precisely who was doing what to whom, why, and to what end in these conflicts and to unravel the many mysteries associated with the conduct of complex military operations. To accomplish these tasks successfully, historians require detailed and accurate orders of battle describing the nature and composition of the forces fighting on contending sides.

Until very recently, those orders of battle have not been available. While general histories of the war and studies of separate battles and operations have correctly identified struggling army group, armies, corps, and divisions, they have done so in general terms, without examining the actual organization and condition of units subordinate to these formations. During wartime, army groups and armies are not always a fully uniform in their composition and strength and corps and divisions are not always complete. This is truer still when the contending forces have conducted sustained operations over long periods of time and have been subject to debilitating attrition.

Nowhere is this truer than in my area of study, the Soviet-German War, 1941-1945. During this struggle, the German Army and Red Army alike conducted high-intensity operations for months, if not years. This intense sustained combat exacted a staggering toll on the personnel strength of opposing formations and units. As a result, these forces were required to fight on despite dramatic and often debilitating personnel and equipment losses. Therefore, sustained offensive and defensive operations lasting periods ranging from days and weeks to many months seriously eroded the overall strength and especially the combat strength of these forces. Because manpower constraints prevented the German Army from raising new formations, the older ones were required to fight on at reduced strengths. This meant that army groups, armies, and corps varied significantly in composition and strength, and corps and divisions worn down in combat were disbanded outright or fought on as corps and division groups. The Germans compensated for their numerical inferiority via a vis Red Army formations by relying on extensive individual and unit training combined with skillful task organization of existing combined-arms forces at every level from army and panzer corps down to battalion level.

As a result, a dizzying array of tailored formations appeared in the German Army’s order of battle ranging from Army detachments [abteilung] within army groups, down through corps groups [gruppen] and detachments within armies and division groups and ad hoc groups named for their commanders within corps, to combat groups [kampfgruppen] within divisions and even regiments. In addition, army groups named after their commanders emerged as German armies closely cooperated with armies from Germany’s axis allies but usually under German command.

This task organization at every level became the rule rather than the exception after the intense but chaotic fighting in the Stalingrad region in December 1942 and expanded further from 1943 through 1945. It was this successful task organization that permitted smaller German formations to contend successfully with Red Army forces well over twice their size.

Historians trying to describe and analyze combat operations in these circumstances have had to wrestle with the challenges posed by altered German force organization after December 1942. I faced this problem when I attempted to identify opposing forces and quantify their relative strength and durability. The ensuing frustration was palpable as I was forced to rely on the symbology (force flags) present on German operational maps and simple periodic German orders of battle. I alleviated this frustration when I encountered a man who claimed to be sorting out this confusing German organization for combat. Withmultiple thick black notebooks in his hands, William McCroden visited me and offered to share with me his extensive work on German order of battle. I was staggered by the accurate detail in these notebooks, so much so I urged him to publish the results of his research. However, because his research was ongoing and required careful organization to make it comprehensive and understandable to readers, it has taken McCroden more than ten years for him to finish his work and, with Thomas Nutter’s assistance, to put it in an understandable format.

In the meantime, McCroden’ s notebooks became indispensable tools inmy research, worthy companions to the extensive Red Army orders of battle recently released by the Russian Federation’s Ministry of Defense. These tools, by virtue of their accurate and detailed orders of battle of the contending sides, proved essential in my further research on the Soviet-German War.

This fresh and comprehensive volume on German wartime order of battle is essential for anyone researching the record of the German Army in World War II. It is organized into six parts encompassing the entire organizational expanse of the German Army. These include:

Fairly self-explanatory, Parts II through V show the formations subordinate to these major commands. Part I, arguably the most valuable section, deals with the many special and often truncated organizations that appeared in great quantities during the second half of the war, which defied measurement based on normal corps, division, and regimental tables of organization and equipment. Careful examination of these formations and units found within the routine orders of battle produced by army groups and armies, permit the historian to flesh out the army’s actual composition, strengths, and capabilities. Finally, Part VI covers the often invisible portion of the army, including units of the High Command (OKW) reserve, Replacement Army, and those in transit between various commands.

This volume is an essential tool in determining who was doing what to whom and, most important, why. Tangentially, it also explains why German forces performed as stolidly as they did to war’s end. Thus, the book makes a major contribution to our understanding of why the flow of combat developed as it did throughout the entire war. Finally, together with recent Russian archival releases of Red Army orders of battle, McCroden’s and Nutter’s seminal work clears up many dilemmas that have vexed historians for years. This book will be of use to specialists and well as readers with a general interest in World War II.

William T. McCroden is a native of suburban Cleveland, Ohio, and has also lived in Michigan, Florida, and Oregon. He served in the U.S. Coast Guard during the Vietnam era, has an associate’s degree, and worked for the Department of Veterans Affairs. William spent decades researching the orders of battle of the German armed forces in the Second World War. He is married to the former Marsha Prouty and lives in Fairview Park, Ohio, with their six cats. Thomas E. Nutter recently retired after practicing intellectual property law for more than thirty years. In addition to his Juris Doctorate, he holds master’s and doctorate degrees in military history and devotes most of his time to researching and writing about Germany and the German armed forces. In addition to various essays, Tom reviews for The New York Journal of Books. He lives in Kirkwood, Missouri, with his wife Shawn, their youngest son Maxwell, and their German Shepherds Caesar and Cleopatra. His work also appears on his website www.instahlgewittern.com.

A Combat Engineer with Patton’s Army: The Fight Across Europe with the 80th “Blue Ridge” Division in World War II

This is a one of those books that come along in a lifetime, that actually gives the reader what they look for on Germany&#039;s Orders of Battles. Thank you for such a wonder source of this information. Very indepth, very great work for history buffs.