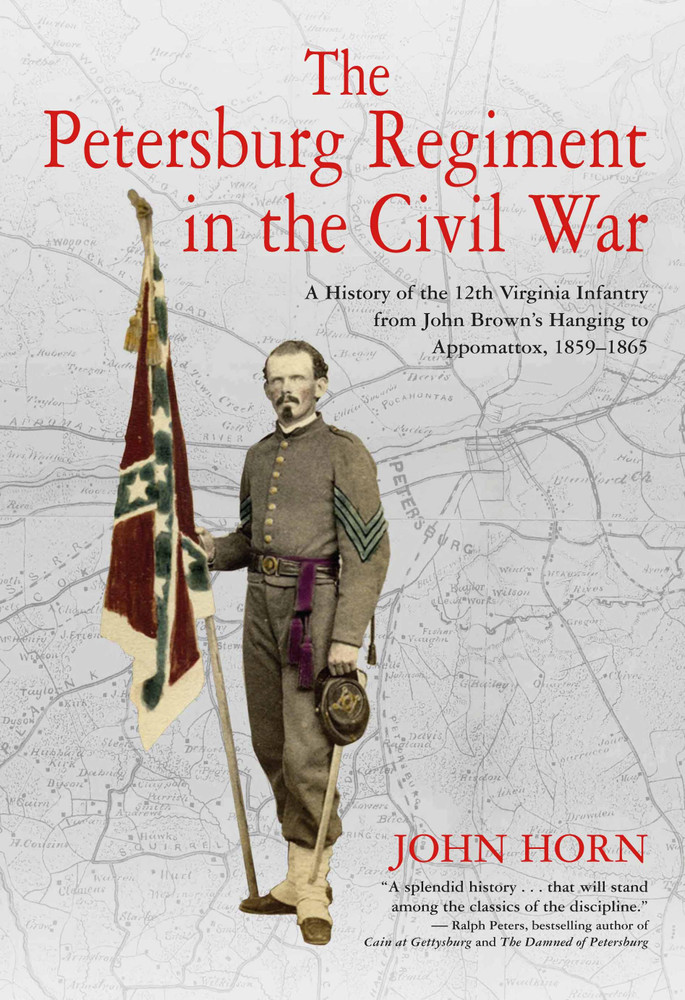 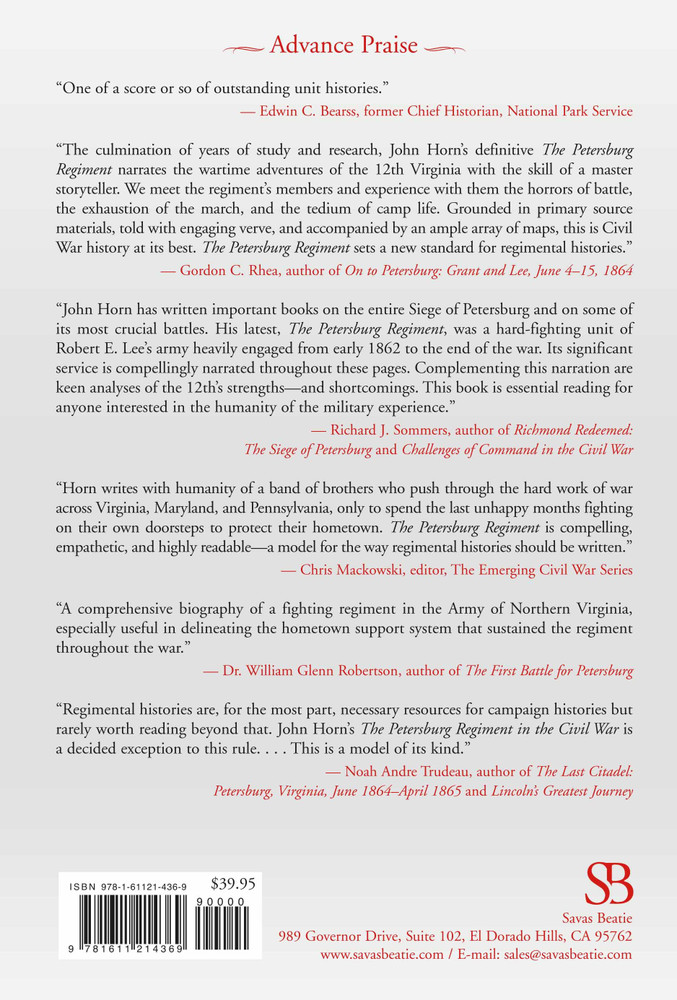 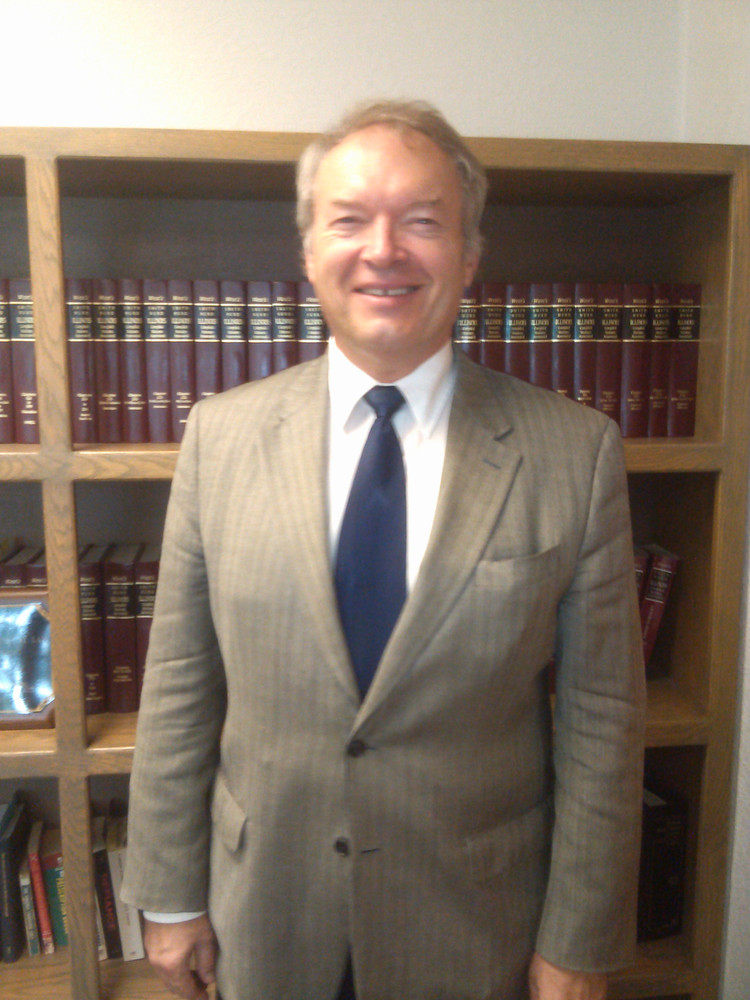 The 12th Virginia has an amazing history. John Wilkes Booth stood in the ranks of one of its future companies at John Brown’s hanging. The regiment refused to have Stonewall Jackson appointed its first colonel. Its men first saw combat in naval battles, including Hampton Roads and First Drewry’s Bluff, before embarrassing themselves at Seven Pines—their first land battle—just outside Richmond. Thereafter, the 12th’s record is one of hard-fighting from the Seven Days’ Battles all the way to Appomattox. Its remarkable story is told here in full for the first time in John Horn’s The Petersburg Regiment in the Civil War: A History of the 12th Virginia Infantry from John Brown’s Hanging to Appomattox, 1859-1865.

The Virginians of the 12th found themselves in some of the most pivotal battles of the war under Generals William Mahone and later, David Weisiger. After distinguishing themselves at Second Manassas, they were hit hard at Crampton’s Gap in the South Mountain fighting and were only able to field 25 men three days later at Sharpsburg. Good service at Chancellorsville followed. Its Gettysburg performance, however, tied to General Mahone’s mysterious behavior there, remains controversial. The Virginians played a key role in Longstreet’s flank attack at the Wilderness as well as in his near-fatal wounding, launched a bayonet charge at Spotsylvania, and captured their first enemy flag. The regiment truly came into its own during the nine-month siege of Petersburg, where it fought in a host of bloody battles including the Crater, Jerusalem Plank Road, Globe Tavern, Second Reams Station, Burgess Mill, and Hatcher’s Run. Two days before the surrender at Appomattox the regiment fought in the rear guard action at Cumberland Church—General Lee’s final victory of the war.

Horn’s definitive history is grounded in decades of archival research that uncovered scores of previously unused accounts. The result is a lively, driving, up-tempo regimental history that not only describes the unit’s marches and battles, but includes personal glimpses into the lives of the Virginians who made up the 12th regiment. Tables compare the 12th’s fighting prowess with friend and foe, and an appendix resolves the lingering controversy over the fate of the regiment’s last battle flag.

With thirty-two original maps, numerous photos, diagrams, tables, and appendices, a glossary, and many explanatory footnotes, The Petersburg Regiment in the Civil War will long be hailed as one of the finest regimental histories ever penned.

“One of a score or so of outstanding unit histories.” - Edwin C. Bearss, former Chief Historian, National Park Service

"One of the best regimental histories this reviewer has read . . . Highly recommended." - Strategy Page

“The culmination of years of study and research, John Horn’s definitive The Petersburg Regiment narrates the wartime adventures of the 12th Virginia with the skill of a master storyteller. We meet the regiment’s members and experience with them the horrors of battle, the exhaustion of the march, and the tedium of camp life. Grounded in primary source materials, told with engaging verve, and accompanied by an ample array of maps, this is Civil War history at its best. The Petersburg Regiment sets a new standard for regimental histories.” - Gordon C. Rhea, author of On to Petersburg: Grant and Lee, June 4-15, 1864

“John Horn has written important books on the entire Siege of Petersburg and on some of its most crucial battles. His latest, The Petersburg Regiment, was a hard-fighting unit of Robert E. Lee’s army heavily engaged from early 1862 to the end of the war. Its significant service is compellingly narrated throughout these pages. Complementing this narration are keen analyses of the 12th’s strengths—and shortcomings. This book is essential reading for anyone interested in the humanity of the military experience.” - Richard J. Sommers, author of Richmond Redeemed: The Siege of Petersburg and Challenges of Command in the Civil War

"In Horn’s history, men at war leap off the pages as full-blooded figures and not just background extras in some sweeping tactical history. If you are interested in revisiting what it must have been like for the men of the 12th to serve, this is the book for you." - Civil War Courier

“Horn writes with humanity of a band of brothers who push through the hard work of war across Virginia, Maryland, and Pennsylvania, only to spend the last unhappy months fighting on their own doorsteps to protect their hometown. The Petersburg Regiment is compelling, empathetic, and highly readable—a model for the way regimental histories should be written.” - Chris Mackowski, editor, The Emerging Civil War Series

“A comprehensive biography of a fighting regiment in the Army of Northern Virginia, especially useful in delineating the hometown support system that sustained the regiment throughout the war.” - Dr. William Glenn Robertson, author of The First Battle for Petersburg

“Charting the course of a single regiment from 1861 to the war’s end is a daunting challenge, but Horn is up to the task. His handling of the numerous campaigns is solid, and he deftly fits his regiment into the mix, almost always adding vivid anecdotes to the overall narrative (many appearing for the first time) by skillfully employing an extensive selection of firsthand accounts drawn from published and unpublished sources. As an added plus, the maps are numerous and well-drawn. This is a model of its kind.” - Noah Andre Trudeau, author of The Last Citadel: Petersburg, Virginia, June 1864-April 1865 and Lincoln’s Greatest Journey

“John Horn’s splendid history of the 12th Virginia will stand among the classics of the discipline. Long years of research and patient crafting allowed the author to deliver an account as detailed and precise, as honest and clear, as any regimental accounting we’ll ever see. Following the men of Petersburg and its environs from the naïve enthusiasm of the war’s initial months through near-disaster amid the gore at Crampton’s Gap, and on through a series of tough stands in the Chancellorsville campaign to the blunt savagery of the war’s last year, this chronicle of one hard-used, heroic regiment is a true soldier’s book—and that is a great compliment. John Horn takes us as close as words on a page can bring us to the soldier’s experience. From merry snowball fights between entire brigades, to the final, bitter defense of their home city, the men of the 12th Virginia leap to life. Horn’s reliance on first-hand accounts reminds us of how casual death became—as well as how hungry those men in gray became as early as the winter of 1863, when at least a few acquaintances of the regiment found rat meat a tasty supplement to their rations. Simple pleasures and harsh punishments, battlefield confusion and clashes of character…informal truces on the picket line and the shock of finding your powder wet as the enemy approaches…so often, it’s the telling detail, the tidbit ignored by the proponents of grand history, that really bring those Civil War soldiers to life again. And Horn is the master of such details.” - Ralph Peters, bestselling author of Cain at Gettysburg and The Damned of Petersburg

“Reflecting his years of careful research, Horn tells an exciting story, which scholars, students, and buffs will both enjoy and learn from. The selections from letters, journals, diaries, and memoirs by the soldiers, their wives, and their children, allows students and academics to walk in the shoes of the soldiers and relate to their experiences on the march and in battle, as well as to better appreciate the decisions made during the war.” - NYMAS Review, New York Military Affairs Symposium

A native of the Chicago area, John Horn received a B.A. in English and Latin from New College (Sarasota, Florida) in 1973 and a J.D. from Columbia Law School in the City of New York in 1976. He has practiced law around Chicago since graduation, occasionally holding local public office, and living in Oak Forest with his wife and law partner, H. Elizabeth Kelley, a native of Richmond, Virginia. They have three children. He and his wife have often traveled to the Old Dominion to visit relatives, battlefields, and various archives. John has published articles in Civil War Times Illustrated and America’s Civil War. His books include The Destruction of the Weldon Railroad (republished in 2015 as The Siege of Petersburg: The Battles for the Weldon Railroad, August 1864, with a dust jacket based on a painting of a soldier from the town where John has his law office winning a Medal of Honor on August 16, 1864), and The Petersburg Campaign. With Hampton Newsome (author of Richmond Must Fall) and Dr. John G. Selby (author of Virginians at War), John co-edited Civil War Talks: The Further Reminiscences of George S. Bernard & His Fellow Veterans. This was a sequel to Bernard’s War Talks of Confederate Veterans, which was published in 1892. Civil War Talks was ready for publication in 1896 but disappeared until 2004, when it was found in a flea market, purchased for fifty dollars, and sold to the History Museum of Western Virginia for $15,000. Bernard served in the Petersburg Regiment. John blogs at petersburgcampaign@blogspot.com.