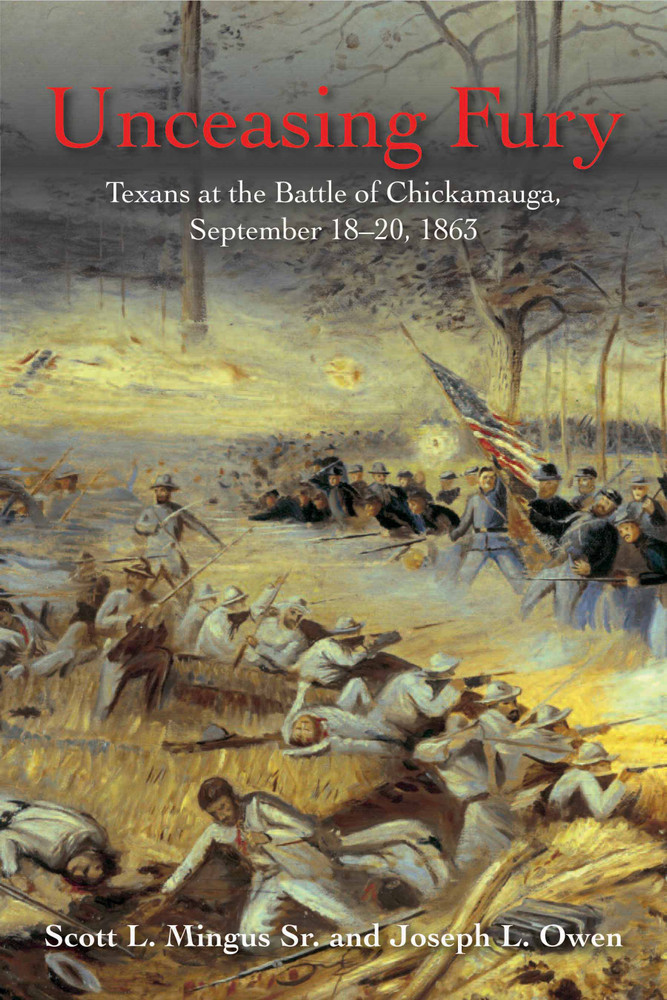 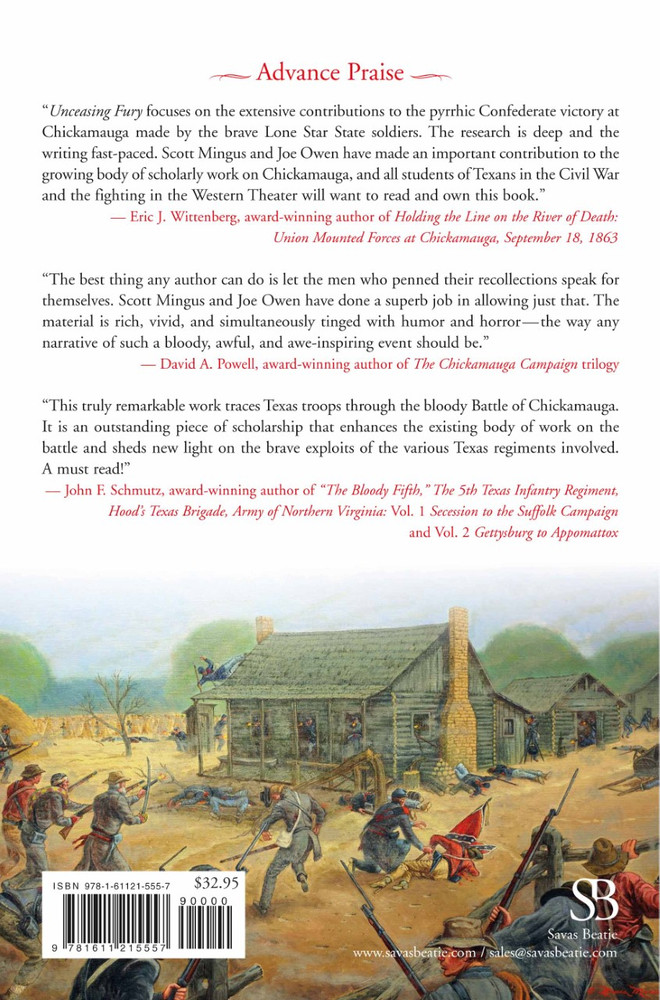 THE SIGNED COPY PROMO HAS ENDED. THIS BOOK WILL BE AVAILABLE TO PURCHASE MID-MONTH.

After Gettysburg, it was the Civil War’s largest battle, but until recently, little of consequence had been written about Chickamauga. You can count on one hand the number of authors who have tackled Chickamauga in any real depth, and most of their works cover the entire battle. Left unmined and mostly forgotten are the experiences of specific brigades, regiments, and state-affiliated troops. Scott Mingus and Joseph Owen’s Unceasing Fury: Texans at the Battle of Chickamauga, September 18–20, 1863, is the first full-length book to examine in detail the role of troops from the Lone Star State.

Texas troops fought in almost every major sector of the sprawling Chickamauga battlefield, from the first attacks on September 18 on the bridges spanning the creek to the final attack on Snodgrass Hill on September 20. Fortunately, many of the survivors left vivid descriptions of battle action, the anguish of losing friends, the pain and loneliness of being so far away from home, and their often-colorful opinions of their generals.

The authors of this richly detailed study based their work on hundreds of personal accounts, memoirs, postwar newspaper articles, diaries, and other primary sources. Their meticulous work provides the first exploration of the critical role Texas enlisted men and officers played in the three days of fighting near West Chickamauga Creek in September 1863.

Unceasing Fury provides the Lone Star State soldiers with the recognition they have so long deserved.

“Unceasing Fury focuses on the extensive contributions to the pyrrhic Confederate victory at Chickamauga made by the brave Lone Star State soldiers. The research is deep and the writing fast-paced. Scott Mingus and Joe Owen have made an important contribution to the growing body of scholarly work on Chickamauga, and all students of Texans in the Civil War and the fighting in the Western Theater will want to read and own this book.” — Eric J. Wittenberg, award-winning author of Holding the Line on the River of Death: Union Mounted Forces at Chickamauga, September 18, 1863

“The best thing any author can do is let the men who penned their recollections speak for themselves. Scott Mingus and Joe Owen have done a superb job in allowing just that. The material is rich, vivid, and simultaneously tinged with humor and horror—the way any narrative of such a bloody, awful, and awe-inspiring event should be.” — David A. Powell, award-winning author of The Chickamauga Campaign trilogy

“This truly remarkable work traces Texas troops through the bloody Battle of Chickamauga. It is an outstanding piece of scholarship that enhances the existing body of work on the battle and sheds new light on the brave exploits of the various Texas regiments involved. A must read!” — John F. Schmutz, award-winning author of “The Bloody Fifth,” The 5th Texas Infantry Regiment, Hood’s Texas Brigade, Army of Northern Virginia: Vol. 1 Secession to the Suffolk Campaign and Vol. 2 Gettysburg to Appomattox

Scott Mingus, a scientist and consultant in the global pulp & paper industry, holds patents in self-adhesive postage stamps and bar code labels. The Ohio native graduated from the Paper Science & Engineering program at Miami University. He has written 19 Civil War and Underground Railroad books. His biography Confederate General William “Extra Billy” Smith won multiple awards, including the Dr. James I. Robertson, Jr. Literary Award for Confederate history. He has also written articles for many publications including Gettysburg Magazine. Joe Owen is a National Park Ranger at Lyndon B. Johnson National Historical Park in Johnson City, Texas. He served 15 years in the U.S. Navy, attended college at East Central University in Ada, Oklahoma, and received a Bachelor’s Degree in History and a Masters Degree in Secondary Education. Joe taught Social Studies for eight years in Oklahoma, Texas and Oregon before working for the NPS. He is a co-author of two books about Hood’s Texas Brigade, Texans At Gettysburg: Blood and Glory with Hood’s Texas Brigade, (2016), and Texans at Antietam: A Terrible Clash of Arms, September 16-17, 1862, (2017), and is the author of Lone Star Valor: Texans of the Blue and Gray at Gettysburg (2019). Joe received the 2019 Jefferson Davis Gold Medal from the Daughters of Confederacy for outstanding research and writing. He lives with his wife Cathy in Blanco, Texas.