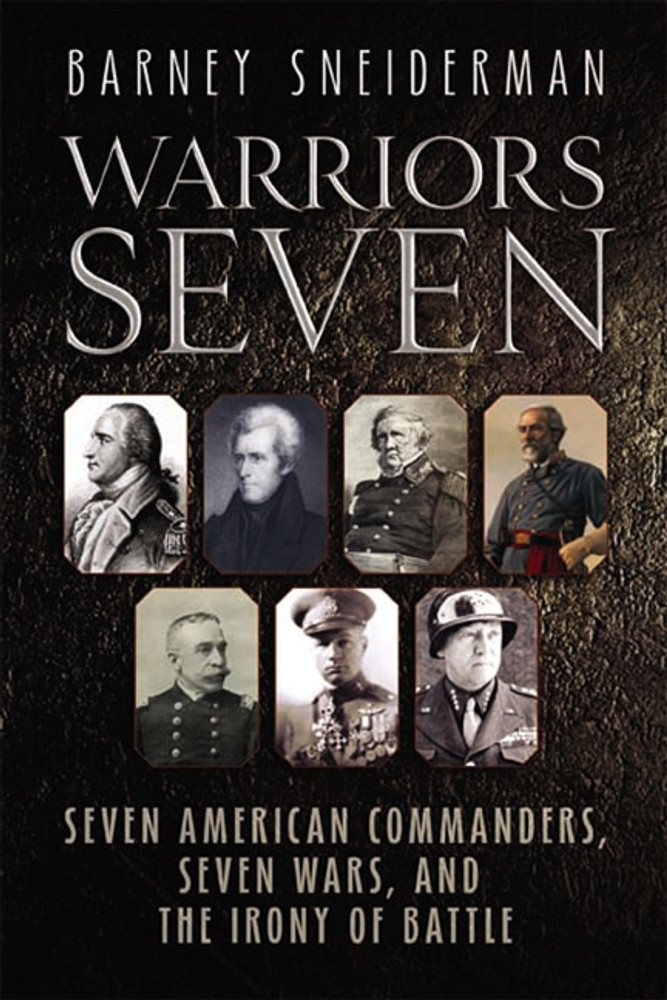 Warriors Seven offers a fascinating collection of American commander “profiles” written in a lively and graphic style. The unique aspect of Dr. Sneiderman’s approach is that each essay sketches the ironic twists of fate that befell these men at or near the peak of their careers.

The subjects of this study include: Benedict Arnold, Andrew Jackson, Winfield Scott, Robert E. Lee, George Dewey, Billy Mitchell, and George Patton. These courageous leaders are successively featured in each of America’s seven wars from 1775 to 1945: the Revolutionary War, the War of 1812, the Mexican War, the Civil War, the Spanish-American War, World War I, and World War II. Each entry highlights or focuses upon a single battle: Saratoga (1777), New Orleans (1815), Mexico City (1847), Malvern Hill (1862), Manila Bay (1898), St. Mihiel (1918), and Messina (1943).

Each entry highlights the life and military career of each commander up to the moment of the featured battle, with a thread of continuity coursing through each chapter. For example, the essay on Andrew Jackson opens with a battle fought during the Revolutionary War that Jackson witnessed as a 13-year-old courier for the Continental Army.

Twenty-seven original battlefield maps facilitate the reader’s understanding of the momentous events described in these pages. Warriors Seven will be welcomed by anyone who appreciates gripping narrative military history leavened with a slice of historical irony.

"Dr. Sneiderman has written a brilliant and fascinating book.... that shows how genius, resolve, dedication, opportunity, and hard work create great military leaders, but also how demons sometimes lurk in the hearts of famous men and dull their glory." - Noted historian Bevin Alexander

Barney Sneiderman served as a professor in the Faculty Law, University of Manitoba, in Winnipeg, Canada, from 1969 until illness prompted his retirement in 2006. He is the principal author of the acclaimed Canadian Medical Law: An Introduction for Physicians, Nurses, and other Health Care Professionals (3rd Edition, 2003, Carswell). The Connecticut native and former journalist is known for his lively and user-friendly writing style. Warriors Seven is a reflection of his long-time interest in American and European political and military history.

Books on the American Civil War: A Critical Bibliography