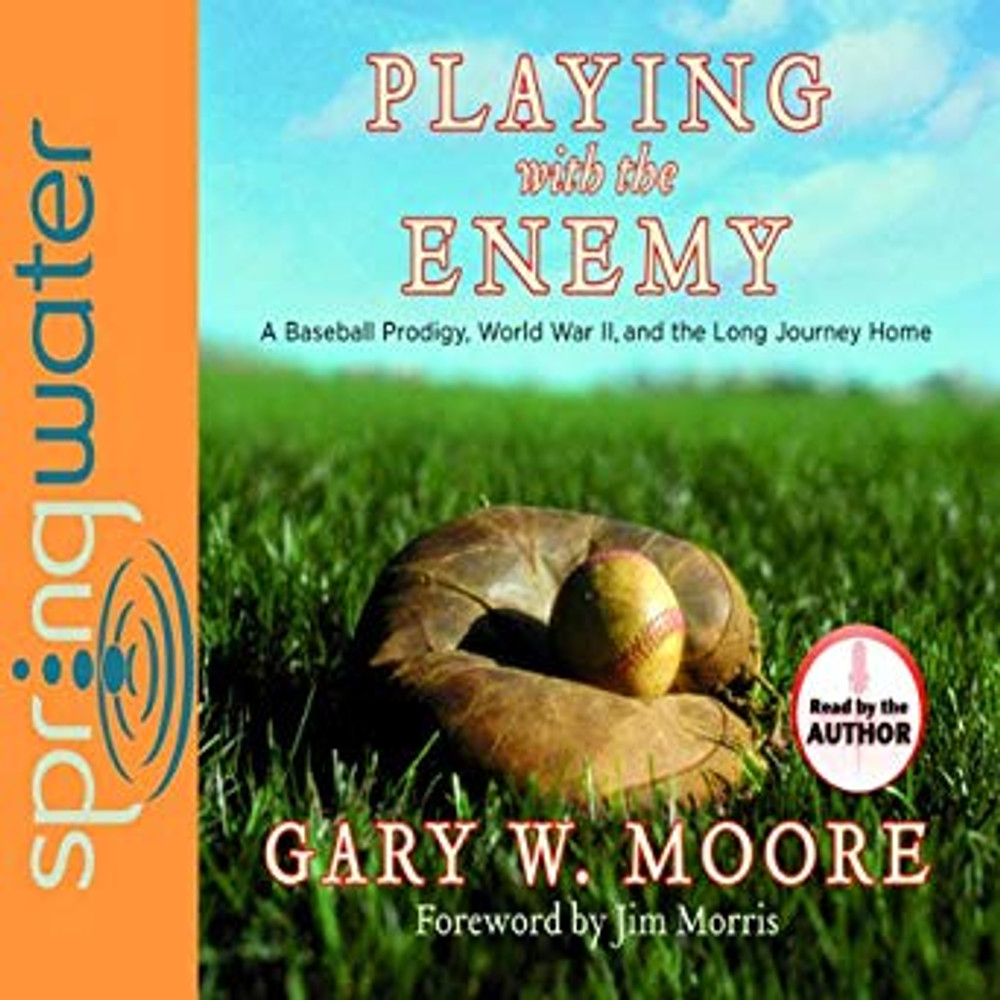 AUDIO - Playing With the Enemy: A Baseball Prodigy, a World at War, and a Field of Broken Dreams

It was true in the 1940s, and it is still true today: if you have talent, someone will notice. In Gene Moore’s case, that someone was the Brooklyn Dodgers.

Gene Moore was a farm boy living with his family in Sesser, Illinois, a town so small even map makers ignored it. As a teenager, when he wasn’t in school or helping his Pop on the farm, slopping the hogs and doing other chores with his older brother Ward and five sisters, Gene was playing baseball with the guys on the town team. Some were twice his age. The older fellows didn’t mind having the Moore kid on their team because he could hit the ball farther than anyone else, he was the best catcher anyone had ever seen, he could throw men out from his knees, and not a ball ever got past him. Gene was 15 years old.

Word quickly spread across the United States about the country boy who could hit the ball a country mile. The Dodgers wanted to take a look at this farm kid, barely old enough to shave and still awaiting his first kiss, but brash enough to call the pitches from behind the plate and motion to the infielders and outfielders as to how they should position themselves for certain hitters.

Headed for baseball stardom with the Brooklyn Dodgers, Gene’s destiny was interrupted by Pearl Harbor. After playing ball for the Navy in the Azores and North Africa, Gene and his team were sent to the States for a special—and top secret—mission: guarding German sailors captured from U-505. Unable to field a team, Gene convinced his commander to allow him to teach the enemy how to play baseball while he and his teammates waited for the war to end so they could be called up into the Major Leagues. But Gene’s future changed irrevocably in Louisiana. His life . . . and maybe our national pastime . . . was forever altered.

Inspired by true events, Playing with the Enemy is the riveting story of a depression-era youth and his brush with destiny. Author Gary Moore, Gene’s son, didn’t learn of his father’s remarkable odyssey through Would War II and minor league baseball until the day before Gene’s death. Confronted with evidence of a possible career in baseball, Gene finally broke decades of silence and spent the next several hours relieving himself of the heavy burden he had been carrying. The stunning news sent the son on his own odyssey as he researched his father’s life and interviewed dozens of people.

The astonishing story of Gene Moore’s life in and out of baseball is an exciting and often heart-wrenching saga that will capture the heart of every red- blooded American who can still smell the fresh-cut summer grass or remember how it felt to tie on the cleats while dreaming of making it to the big leagues. Jammed with memorable characters from an extraordinary time in our country’s history, Playing with the Enemy is a story that will be read and reread for generations to come. And it is one you will never forget.

Starred Review. In 1940, at just 15 years old, small-town baseball star Gene Moore was signed to the Brooklyn Dodgers, who saw in him the potential to become one of the great catchers of all time. Before that could happen, though, WWII intervened. Gene's story, a surprising paean to the power and humanity of a game, is told here by his son, a first-time author who exhibits the confidence and pacing of a pro. His gripping material certainly helps: after several years overseas in the Navy's touring baseball team, Gene was brought back to Louisiana and assigned to guard secret German POWs, whose U-boat was captured just days before the storming of Normandy. There, Gene teaches his German captives how to play baseball, with a number of unintended and life-altering consequences. When Gene's finally able to return home to Sesser, Ill., he's "on crutches, depressed and embarrassed," holing up in the local bar and prompting one bartender to lament, "he's become one of us, when we were hoping he would make us like him." Gene's journey from promise to despair and back again, set against a long war and an even longer post-war recovery, retains every bit of its vitality and relevance, a 20th-century epic that demonstrates how, sometimes, letting go of a dream is the only way to discover one's great fortune.
Copyright © Reed Business Information, a division of Reed Elsevier Inc. All rights reserved.

Gene Moore, from tiny Sesser, Illinois, was signed by the Brooklyn Dodgers at age 15 in 1940. After Pearl Harbor, the Dodgers arranged for him to be a member of a traveling U.S. Navy baseball team to entertain troops in the European theater. Eventually, the team was assigned stateside to guard a select group of German prisoners in Louisiana. The Germans had been captured when their submarine, the U-505 (now a featured attraction at Chicago's Museum of Science and Industry), experienced mechanical problems in the vicinity of Allied warships. The story of the relationship that developed between the prisoners and their guards is a fascinating one. Because the Allies captured key code-breaking information with the sub, the existence of the prisoners was kept secret. Author Moore, son of Gene, also tells the heartbreaking story of how his father tried to recapture his major-league dream after the war but did not succeed. A moving profile of one, nearly unknown member of the Greatest Generation. Wes Lukowsky
Copyright © American Library Association. All rights reserved

Playing with the Enemy: A Baseball Prodigy, a World at War, and a Field of Broken Dreams