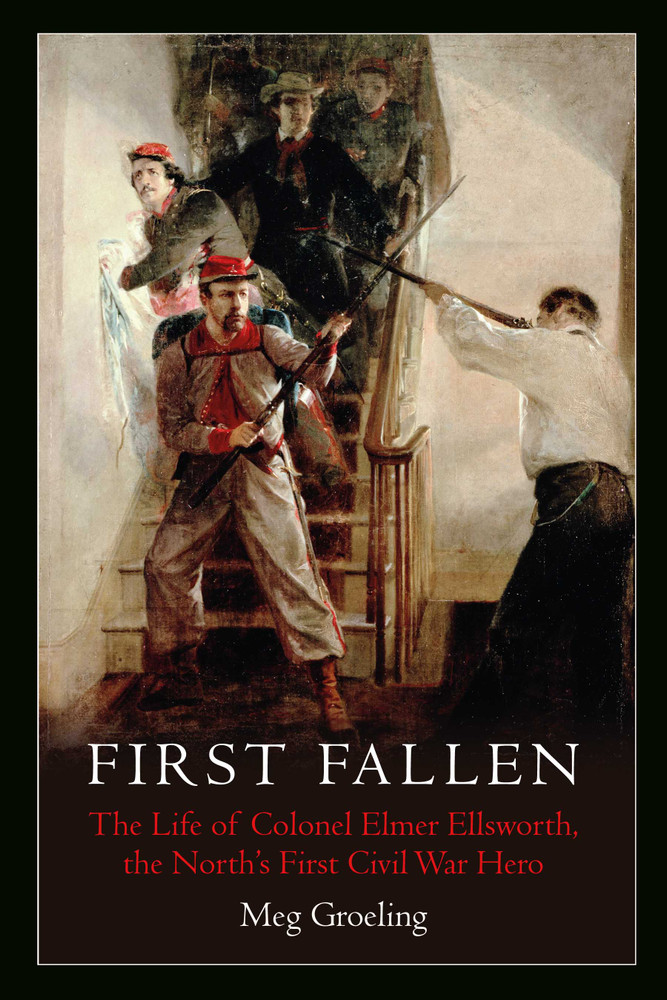 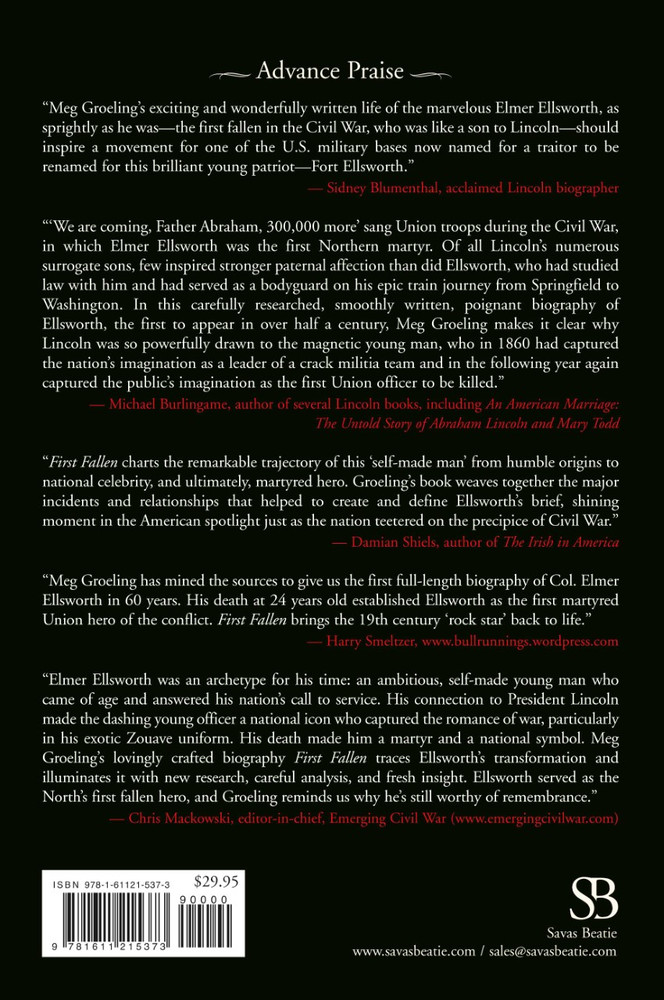 On May 24, 1861, Col. Elmer Ellsworth became the first Union officer killed in the Civil War. The entire North was aghast. First Fallen is the first modern biography of this national celebrity, Northern icon, and mostly forgotten national hero.

Ellsworth and his entertaining U.S. Zouave Cadets drill team had performed at West Point, in New York City, and for President, James Buchanan before returning home to Chicago. He helped his friend and law mentor Abraham Lincoln in his quest for the presidency, and when Lincoln put out the call for troops after Fort Sumter was fired upon, Ellsworth responded. Within days he organized more than 1,000 New York firefighters into a regiment of volunteers.

When he was killed, the Lincolns rushed to the Navy Yard to view the body of the young man they had loved as a son. Mary Lincoln insisted he lie in state in the East Room of the White House. The elite of New York brought flowers to the Astor House and six members of the 11th New York accompanied their commander’s coffin. When a late May afternoon thunderstorm erupted during his funeral service at the Hudson View Cemetery, eyewitnesses referred to it as “tears from God himself.” The death of the young hero was knocked out of the headlines eight weeks later by the battle of First Bull Run. The trickle of blood had now become a torrent that would not stop for four long years.

Groeling’s well-written biography is grounded in years of archival research and includes diaries, personal letters, newspapers, and many other accounts. In the six decades since the last portrait of Ellsworth was written, new information has been found that gives readers and historians a better understanding of the Ellsworth phenomenon and his deep connections to the Lincoln family.

First Fallen: The Life of Colonel Elmer Ellsworth, the North’s First Civil War Hero examines every facet of Ellsworth’s complex, fascinating life and adds richly to the historiography of the Civil War.

“Meg Groeling’s exciting and wonderfully written life of the marvelous Elmer Ellsworth, as sprightly as he was—the first fallen in the Civil War, who was like a son to Lincoln—should inspire a movement for one of the U.S. military bases now named for a traitor to be renamed for this brilliant young patriot—Fort Ellsworth.” — Sidney Blumenthal, acclaimed Lincoln biographer

"‘We are coming, Father Abraham, 300,000 more’ sang Union troops during the Civil War, in which Elmer Ellsworth was the first Northern martyr. Of all Lincoln’s numerous surrogate sons, few inspired stronger paternal affection than did Ellsworth, who had studied law with him and had served as a bodyguard on his epic train journey from Springfield to Washington. In this carefully researched, smoothly written, poignant biography of Ellsworth, the first to appear in over half a century, Meg Groeling makes it clear why Lincoln was so powerfully drawn to the magnetic young man, who in 1860 had captured the nation’s imagination as a leader of a crack militia team and in the following year again captured the public’s imagination as the first Union officer to be killed.” — Michael Burlingame, author of several Lincoln books, including An American Marriage:The Untold Story of Abraham Lincoln and Mary Todd

“First Fallen charts the remarkable trajectory of this ‘self-made man’ from humble origins to national celebrity, and ultimately, martyred hero. Groeling’s book weaves together the major incidents and relationships that helped to create and define Ellsworth’s brief, shining moment in the American spotlight just as the nation teetered on the precipice of Civil War.” — Damian Shiels, author of The Irish in America

“Meg Groeling has mined the sources to give us the first full-length biography of Col. Elmer Ellsworth in 60 years. His death at 24 years old established Ellsworth as the first martyred Union hero of the conflict. First Fallen brings the 19th century ‘rock star’ back to life.” — Harry Smeltzer, www.bullrunnings.wordpress.com

"Elmer Ellsworth was an archetype for his time: an ambitious, self-made young man who came of age and answered his nation’s call to service. His connection to President Lincoln made the dashing young officer a national icon who captured the romance of war, particularly in his exotic Zouave uniform. His death made him a martyr and a national symbol. Meg Groeling’s lovingly crafted biography First Fallen traces Ellsworth’s transformation and illuminates it with new research, careful analysis, and fresh insight. Ellsworth served as the North’s first fallen hero, and Groeling reminds us why he’s still worthy of remembrance.” — Chris Mackowski, editor-in-chief, Emerging Civil War (www.emergingcivilwar.com)

Meg Groeling is a regular contributor to the blog Emerging Civil War, exploring subjects beyond the battlefield such as personalities, politics, and practices that affected the men who did the fighting. A writer, teacher, and curriculum developer since 1987, she has taught at both the elementary and middle school levels for more than thirty years. She graduated from California State University, Long Beach with a B.A. in liberal studies and has been involved in continuing education for her entire career. Meg received a master’s degree from American Public University, majoring in military history with a Civil War emphasis. Savas Beatie published her first book, The Aftermath of Battle: The Burial of the Civil War Dead, in the fall of 2015. This is a volume in the Emerging Civil War Series, although it differs from the others in that it takes on a much broader range of subject. The book has received excellent reviews and has already gone into its second printing. She lives in Hollister, California, in a lovely 1928 bungalow covered with roses outside and books inside.

Like a Meteor Blazing Brightly: The Short but Controversial Life of Colonel Ulric Dahlgren