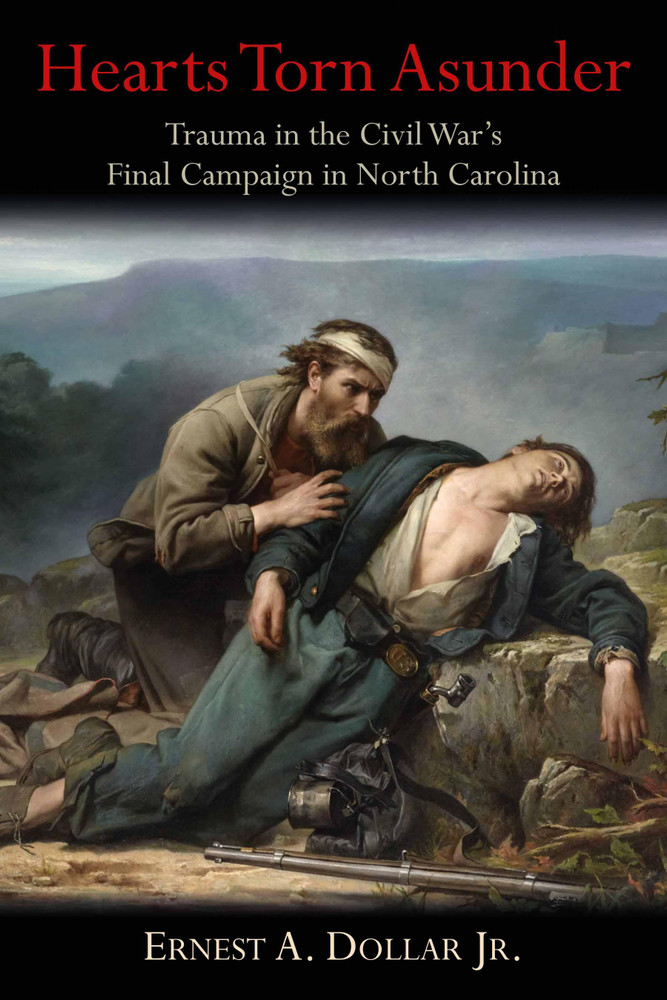 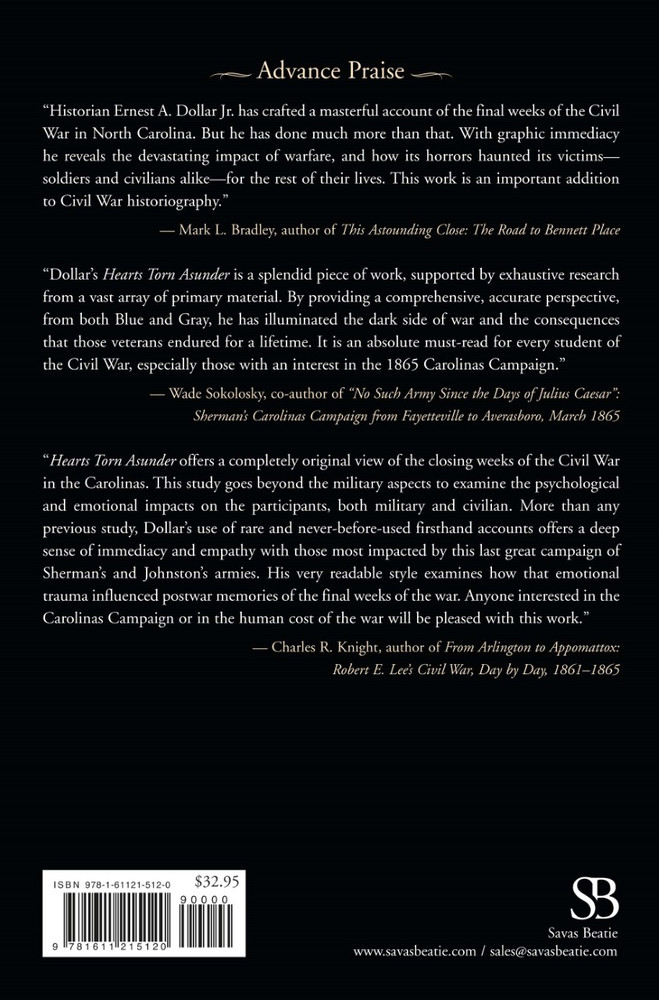 Click HERE to read the Table of Contents, Introduction, and Chapter 1!

In the popular memory, the end of the Civil War arrived at Appomattox with handshakes and amicable banter between Robert E. Lee and Ulysses S. Grant—an honorable ceremony amongst noble warriors. And so it has been remembered to this day. But the war was not over. A larger and arguably more important surrender had yet to take place in North Carolina. This story occupies but little space in the vast annals of Civil War literature. As author Ernest A. Dollar Jr. ably explains in Hearts Torn Asunder: Trauma in the Civil War’s Final Campaign in North Carolina, the lens of modern science may reveal why.

This war’s final campaign in North Carolina began on April 10, 1865, a day after Appomattox. More than 120,000 Union and Confederate soldiers were still in the field bringing war with them as they moved across North Carolina’s heartland. Maj. Gen. William T. Sherman was still out to destroy the South’s ability and moral stamina to make war. His unstoppable Union troops faced Maj. Gen. Joseph E. Johnston’s demoralized but still dangerous Confederate Army of Tennessee. Thousands of paroled Rebels, desperate, distraught, and destitute, added to the chaos by streaming into the state from Virginia. Grief-stricken civilians struggling to survive in a collapsing world were caught in the middle. The collision of these groups formed a perfect storm long ignored by those wielding pens.

Hearts Torn Asunder explores the psychological experience of these soldiers and civilians during the chaotic closing weeks of the war. Their letters, diaries, and accounts reveal just how deeply the killing, suffering, and loss had hurt and impacted these people by the spring of 1865. The author deftly recounts the experience of men, women, and children who endured intense emotional, physical, and moral stress during the war’s dramatic climax. Their emotional, irrational, and often uncontrollable reactions mirror symptoms associated with trauma victims today, all of which combined to shape memory of the war’s end. Once the armies left North Carolina after the surrender, their stories faded with each passing decade, neither side looked back and believed there was much that was honorable to celebrate. Hearts Torn Asunder recounts at a very personal level what happened during those closing days that made a memory so painful that few wanted to celebrate, but none could forget.

"Ernest A. Dollar Jr.'s Hearts Torn Asunder does a moving job of capturing the horror of that Hobbesian time, when the conflict degenerated into a war of all against all. Confederate commanders deployed their troops against marauders from other Rebel units. Federal soldiers seeking revenge for the assassination of President Abraham Lincoln on April 15 marched on Raleigh, N.C., only to be deterred by Federal cannons loaded with flesh-shredding double-canister shells. White civilians were terrified of all soldiers, and with good reason. Confederate troops murdered enslaved Black men seeking freedom for the sheer hell of it." – New York Times

“Historian Ernest A. Dollar Jr. has crafted a masterful account of the final weeks of the Civil War in North Carolina. But he has done much more than that. With graphic immediacy he reveals the devastating impact of warfare, and how its horrors haunted its victims—soldiers and civilians alike—for the rest of their lives. This work is an important addition to Civil War historiography.” — Mark L. Bradley, author of This Astounding Close: The Road to Bennett Place

“Dollar’s Hearts Torn Asunder is a splendid piece of work, supported by exhaustive research from a vast array of primary material. By providing a comprehensive, accurate perspective, from both Blue and Gray, he has illuminated the dark side of war and the consequences that those veterans endured for a lifetime. It is an absolute must-read for every student of the Civil War, especially those with an interest in the 1865 Carolinas Campaign.” — Wade Sokolosky, co-author of “No Such Army Since the Days of Julius Caesar”: Sherman’s Carolinas Campaign from Fayetteville to Averasboro, March 1865

“Hearts Torn Asunder offers a completely original view of the closing weeks of the Civil War in the Carolinas. This study goes beyond the military aspects to examine the psychological and emotional impacts on the participants, both military and civilian. More than any previous study, Dollar’s use of rare and never-before-used firsthand accounts offers a deep sense of immediacy and empathy with those most impacted by this last great campaign of Sherman’s and Johnston’s armies. His very readable style examines how that emotional trauma influenced postwar memories of the final weeks of the war. Anyone interested in the Carolinas Campaign or in the human cost of the war will be pleased with this work.” — Charles R. Knight, author of From Arlington to Appomattox: Robert E. Lee’s Civil War, Day by Day, 1861–1865

“Hearts Torn Asunder” is well written, superbly researched, provides a perspective for both Blue and Gray, and astutely constructed military history that will certainly appeal to those interested in the Civil War’s Final Campaign in North Carolina. Historians and buffs alike interested in the horror of the dramatic climax of the war and collective trauma will find much worth in this tome." - David Marshall

..."this book supplies a vivid, well-written, and entirely memorable account of the war’s final days in North Carolina. Hearts Torn Asunder is yet another reminder of the human costs of our deadliest war." - Emerging Civil War Book Reviews

Durham, North Carolina native Ernest A. Dollar Jr. graduated from the University of North Carolina-Greensboro with B.A. in History and B.F.A. in Design in 1993 and M.A. in Public History from North Carolina State in 2006. He served in the U.S. Army Reserve/North Carolina National Guard from 1993-1999. Ernest has worked in several historic parks in both North and South Carolina, including as executive director of the Orange County Historical Museum, Preservation Chapel Hill. He currently serves as the director of the City of Raleigh Museum and Dr. M. T. Pope House Museum. He lives in Durham with his wife, Suzie, and their sons Elijah and Kilby.