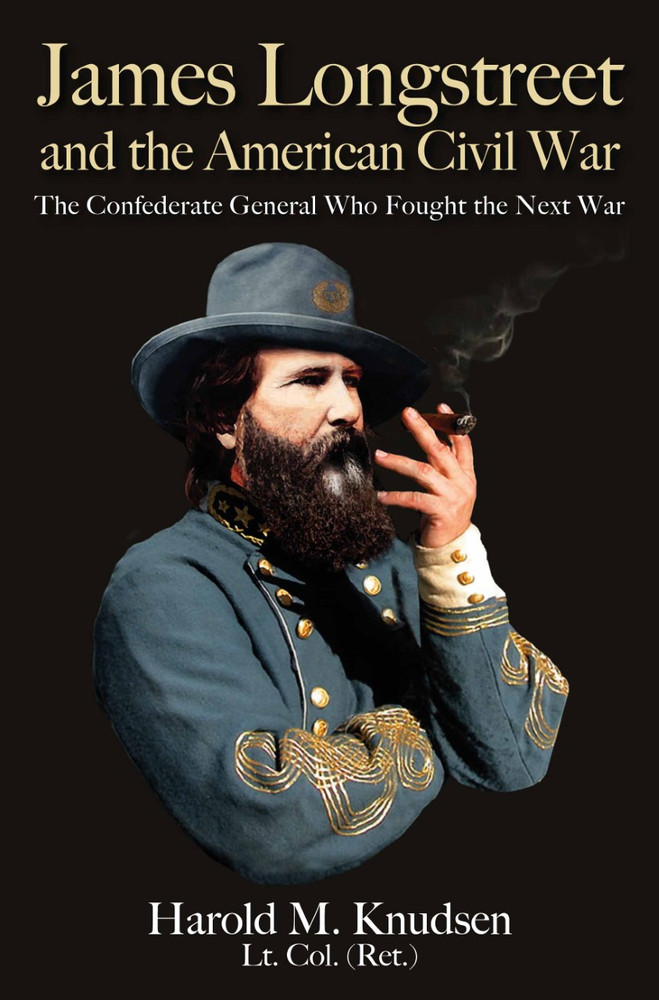 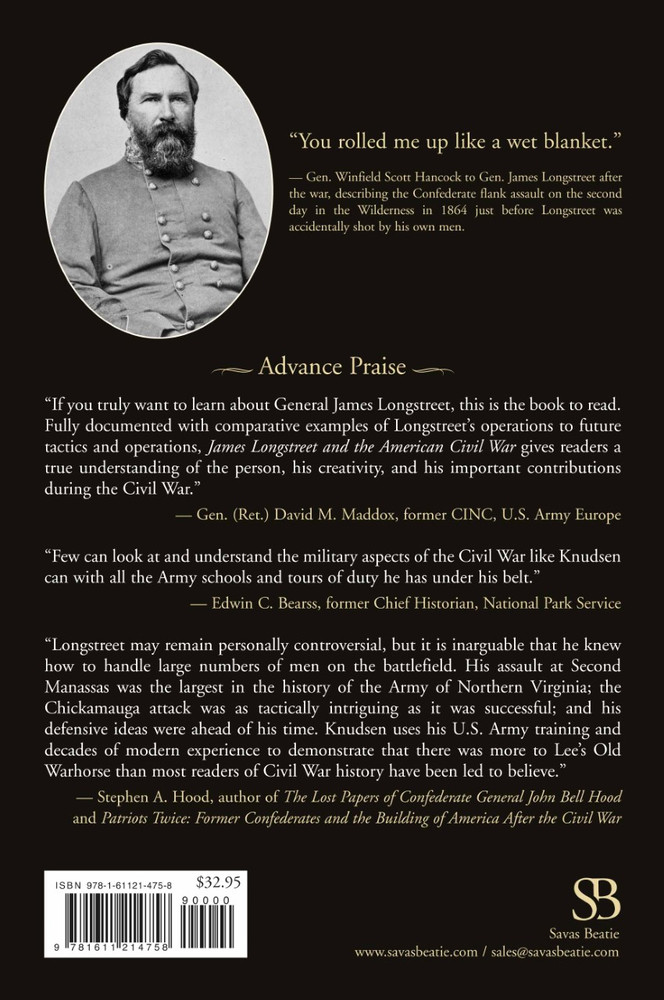 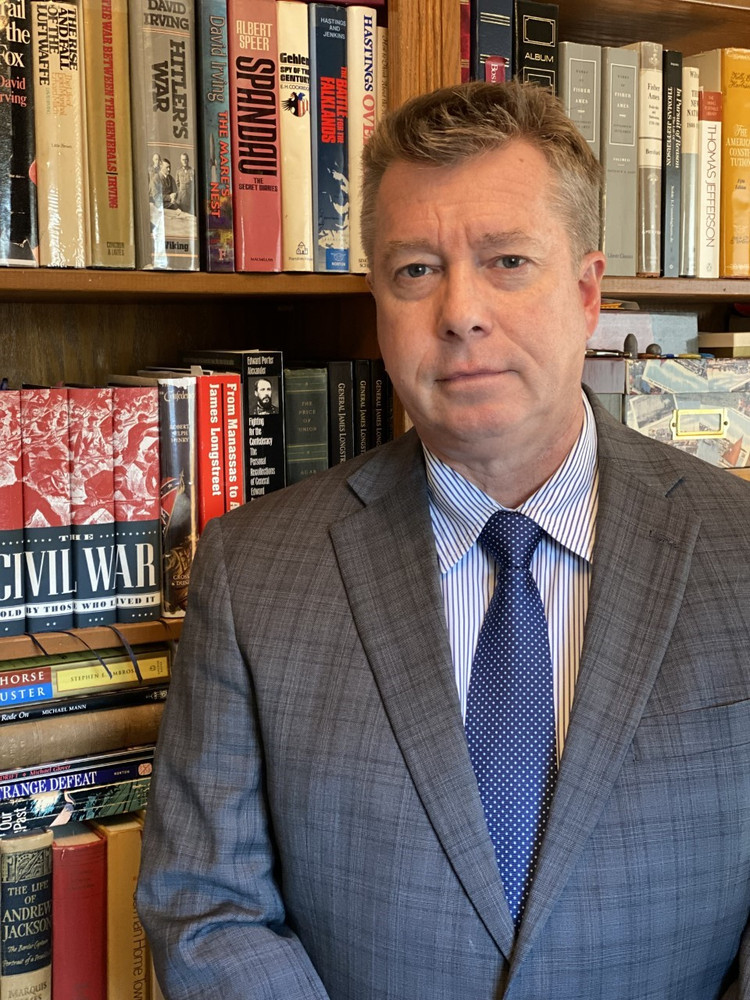 Click HERE to read the Table of Contents, Preface, Introduction, and Chapter 1!

The American Civil War is often called the first “modern war.” Sandwiched between the Napoleonic Wars and World War I, it spawned a host of “firsts” and is considered a precursor to the larger and more deadly 20th century wars. Confederate Gen. James Longstreet made overlooked but profound modern contributions to the art of war. Retired Lt. Col. Harold M. Knudsen explains what Longstreet did and how he did it in James Longstreet and the American Civil War: The Confederate General Who Fought the Next War.

Initially, commanders on both sides extensively utilized Napoleonic tactics that were obsolete because of the advent of the rifled musket and better artillery. Some professional army officers worked to improve tactics, operations, and strategies. On the Confederate side, a careful comparison of Longstreet’s body of work in the field to modern military doctrine reveals several large-scale innovations.

Longstreet understood early that the tactical defense was generally dominant over the offense, which was something few grasped in 1862. Longstreet’s thinking demonstrated a clear evolution that began on the field at First Manassas in July 1861, developed through the bloody fighting of 1862, and culminated in the brilliant defensive victory at Fredericksburg that December. The lethality with which his riflemen and artillery mowed down repeated Union assaults hinted at what was to come in World War I. Longstreet’s ability to launch and control powerful offensives was on display at Second Manassas in August 1862. His assault plan at Chickamauga in Georgia the following September was similar, if not the forerunner to, World War II tactical-level German armored tactics. Other areas show progressive applications with artillery, staff work, force projection, and operational-level thinking.

Longstreet was not the sole agent of modern change away from the Napoleonic method, but his contributions were significant and executed on a large scale. They demonstrated that he was a modern thinker unparalleled in the Confederate Army.

This book draws heavily upon 20th century U.S. Army doctrine, field training, staff planning, command, and combat experience and is the first serious treatment of Longstreet’s generalship vis-a-vis modern warfare. Not everyone will agree with Knudsen’s conclusions, but it will now be impossible to write about the general without referencing this important study.

“If you truly want to learn about General James Longstreet, this is the book to read. Fully documented with comparative examples of Longstreet’s operations to future tactics and operations, James Longstreet and the American Civil War gives readers a true understanding of the person, his creativity, and his important contributions during the Civil War.” — Gen. (Ret.) David M. Maddox, former CINC, U.S. Army Europe

“Few can look at and understand the military aspects of the Civil War like Knudsen can with all the Army schools and tours of duty he has under his belt.” — Edwin C. Bearss, former Chief Historian, National Park Service

“Longstreet may remain personally controversial, but it is inarguable that he knew how to handle large numbers of men on the battlefield. His assault at Second Manassas was the largest in the history of the Army of Northern Virginia; the Chickamauga attack was as tactically intriguing as it was successful; and his defensive ideas were ahead of his time. Knudsen uses his U.S. Army training and decades of modern experience to demonstrate that there was more to Lee’s Old Warhorse than most readers of Civil War history have been led to believe.” — Stephen A. Hood, author of The Lost Papers of Confederate General John Bell Hood and Patriots Twice: Former Confederates and the Building of America After the Civil War

LTC Knudsen is an Illinois native. His career spans twenty five years of active duty Army service, and includes seven resident career artillery, command and staff Army schools and colleges. He has many years of tactical experience in the integration of fire support into maneuver plans and fire control computation for cannon units. He spent nine years in Germany training tactics offensive armored warfare, as well as peace-keeping and counter-insurgency training. A combat veteran of Desert Storm, he performed extensive artillery fire planning and execution in support of the U.S. breakthrough of the Iraqi line and penetration into Iraq. He has also served in the Iraq Campaign. His years of staff work at the Corps, Army, and Pentagon levels give him a strong understanding of army operations from the lowest to highest levels.

Books on the American Civil War: A Critical Bibliography