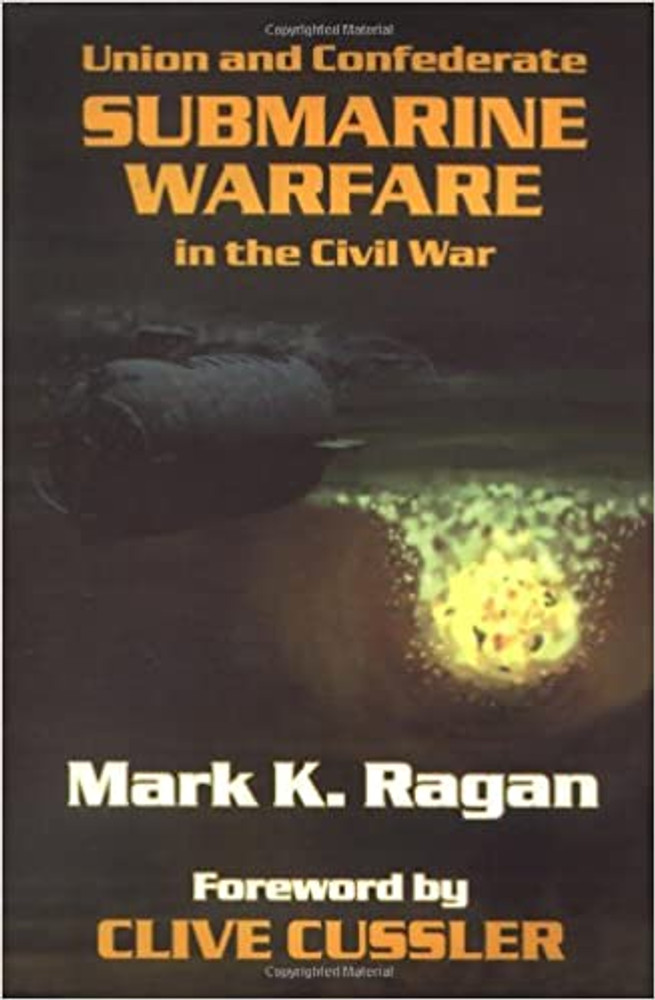 We found a full case in our back storage book room. Only 28 copies.

Most enthusiasts or casual readers of the Civil War are aware that a little submarine called the H. L. Hunley sunk a Union ship off the South Carolina coast. However, few know that almost two-dozen underwater vessels were built during the war by a variety of aspiring men of different backgrounds. Mark Ragan's Union and Confederate Submarine Warfare in the Civil War delves into a fascinating corner of the war, a corner often purposefully shrouded in mystery, as men secretly developed a new tool of warfare.

He introduces us to innovators such as Brutus de Villeroi, Charles P. Leavitt, William Cheeney, John Halligan, Julius Kroehl, James McClintock, Baxter Watson, and H.L. Hunley, men who persevered to prove the usefulness of these underwater nautical devices. Each chapter covers a separate year of the war and this chronological approach works well to reveal the steady evolution of technology and the increasing acceptance of the submarine as a war asset.

Using an excellent array of documentation, diaries, official correspondence, and rare submarine blueprints and photographs, Ragan does a wonderful job in immersing the reader in this rare arena of Civil War warfare. While spending a lot of time discussing the Hunley's history, ample space is still devoted to the variety of other submersibles the Union and Confederacy designed or constructed. Unseen in the standard fare of Civil War books,

Ragan reveals the remarkable story of the submarine. In 1861, both sides already had submarines afloat. The subsequent years saw innovation and enhancements in periscopes, air purification (the Hunley crew could operate submerged for two and a half hours), engine proficiency, armament, and torpedo delivery. Readers will be astonished at the modernity of some of these submarines. Several spelling errors and rather poor photograph reproductions are the only complaints in this very readable treatment. Despite the scarcity of documentation that existed, Ragan convincingly paints a picture of a new breed of innovators who arguably ushered in a new form of warfare.

Both the Union and Confederacy built a wide and incredible array of vessels that could maneuver underwater, and many were put to use patrolling enemy waters. In Union And Confederate Submarine Warfare in The Civil War, Mark Ragan, who spent years mining factory records and log books, brings this little-known history to the surface.

The author, a consultant on the TV movie CSS Hunley, outlines the building programs, construction plans and underwater operations of both the Union and Confederacy.

Most Civil War enthusiasts have heard about the Hunley, the Confederate submarine that sank the USS Housatonic on February 17, 1864. Less well known, however, is that the Hunley was not alone in the water. Both the Union and the Confederacy built submarines; many were operational and patrolled for enemy ships. In Union and Confederate Submarine Warfare in the Civil War, Mark K. Ragan brings this little-known history to the surface. Ragan, who served as consultant on the 1999 TNT movie Hunley, uses contemporary letters, newspaper accounts, factory records, and log books to recount the early history of submarine warfare--from Bushnell's Turtle to the Hunley, from the Alligator to the Intelligent Whale. Many observers were enthusiastic about the new technology, describing it as "as formidable as it is economical." Others were violently opposed, labeling submarines "unchivalrous" and "infernal machines." For better or worse, the submarine was here to stay.

Mark K. Ragan is the author of The Hunley: Submarines, Sacrifice, and Success in the Civil War and was a consultant on the TNT movie "Hunley." He owns and operates a two-man submarine and lives and works in Maryland.

Patriots Twice: Former Confederates and the Building of America after the Civil War