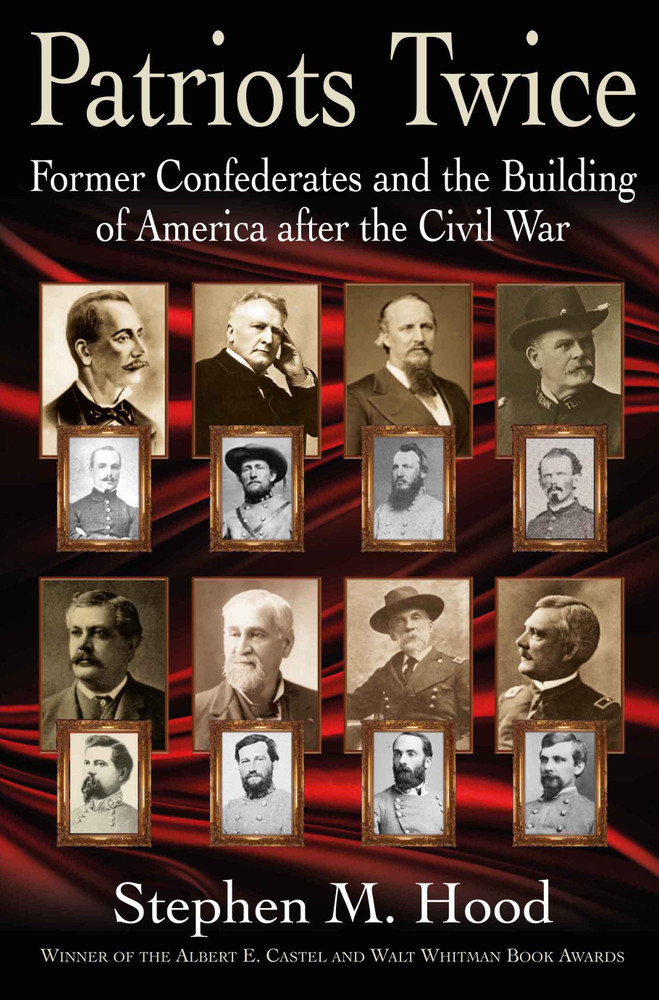 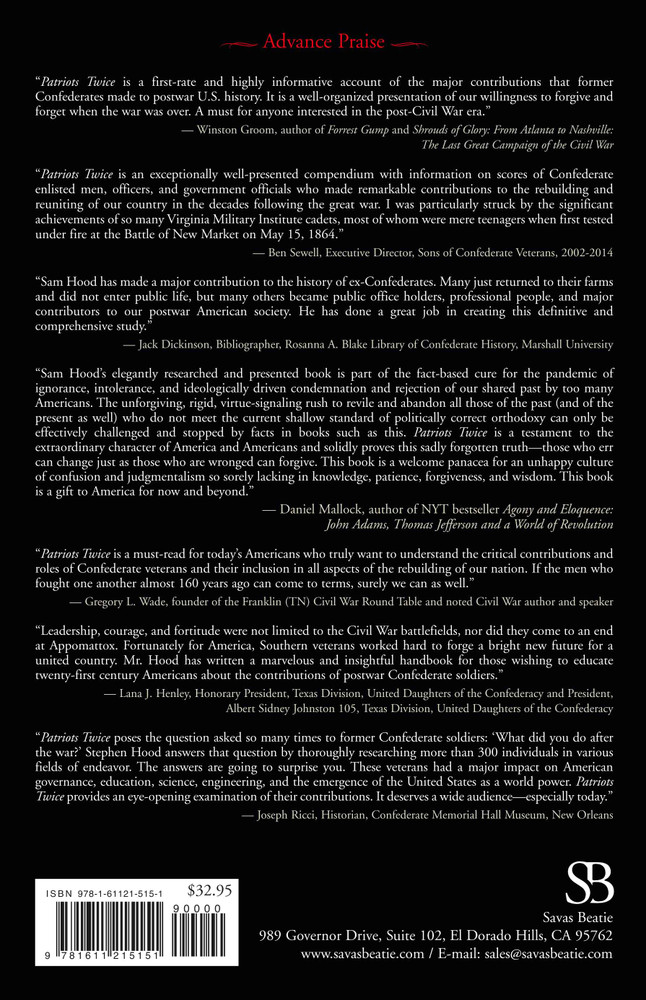 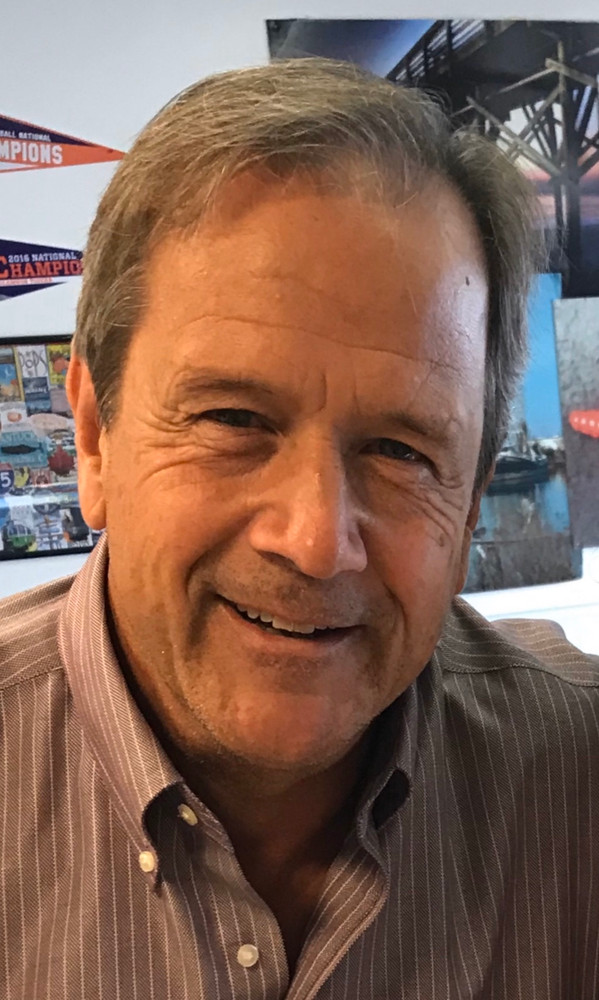 Patriots Twice: Former Confederates and the Building of America after the Civil War

MUST READ: Author Open Letter to General Seidule, author of Robert E. Lee and Me: A Southerner’s Reckoning with the Myth of the Lost Cause (2021)

The long and bloody American Civil War claimed the lives of more than 700,000 men. When it ended, former opponents worked to rebuild their reunified nation and moved into the future together. Many people will find that hard to believe—especially in an era witnessing the destruction or removal of Confederate monuments and the desecration of Confederate cemeteries.

In the unique and timely Patriots Twice: Former Confederates and the Building of America after the Civil War, award-winning author Stephen M. Hood identifies more than three hundred former Confederate soldiers, sailors, and government officials who reintegrated into American society and attained positions of authority and influence in the federal government, the United States military, academia, science, commerce, and industry. Their contributions had a long-lasting and positive influence on the country we have today.

Many of the facts in Patriots Twice will surprise modern Americans. For example, ten postwar presidents appointed former Confederates to serve the reunited nation as Supreme Court justices, secretaries of the U.S. Navy, attorneys general, and a secretary of the interior. Dozens of former Southern soldiers were named U.S. ambassadors and consuls, and eight were appointed generals who commanded U.S. Army troops during the Spanish-American War.

Former soldiers in gray founded or co-founded many of our nation’s colleges and universities—some exclusively for women and newly freed African-Americans. Other former Rebels served as presidents of prominent institutions, including the University of California, Berkeley, and taught at universities outside the South including Harvard, Yale, the University of Wisconsin-Madison, Johns Hopkins, the University of San Francisco, and Amherst College. Several others served on the governing boards of the United States Military Academy at West Point and the United States Naval Academy at Annapolis, Maryland.

Every reader of Patriots Twice has benefited from the post-Civil War reconciliation when former combatants put down their swords, picked up their plowshares, and accepted the invaluable contributions of these (and thousands of other) former Confederates. The men who carried the bayonets found common cause and moved on together. This is an important concept everyone should—no, must—embrace to keep American united, strong, and free.

“Patriots Twice is a first-rate and highly informative account of the major contributions that former Confederates made to postwar U.S. history. It is a well-organized presentation of our willingness to forgive and forget when the war was over. A must for anyone interested in the post-Civil War era"  -- Winston Groom, author of Forrest Gump and Shrouds of Glory: From Atlanta to Nashville: The Last Great Campaign of the Civil War

“Patriots Twice is an exceptionally well-presented compendium with information on scores of Confederate enlisted men, officers, and government officials who made remarkable contributions to the rebuilding and reuniting of our country in the decades following the great war. I was particularly struck by the significant achievements of so many Virginia Military Institute cadets, most of whom were mere teenagers when first tested under fire at the Battle of New Market on May 15, 1864.” -- Ben Sewell, Executive Director, Sons of Confederate Veterans, 2002-2014

“Sam Hood has made a major contribution to the history of ex-Confederates. Many just returned to their farms and did not enter public life, but many others became public office holders, professional people, and major contributors to our postwar American society. He has done a great job in creating this definitive and comprehensive study.” -- Jack Dickinson, Bibliographer, Rosanna A. Blake Library of Confederate History, Marshall University

“Sam Hood’s elegantly researched and presented book is part of the fact-based cure for the pandemic of ignorance, intolerance, and ideologically driven condemnation and rejection of our shared past by too many Americans. The unforgiving, rigid, virtue-signaling rush to revile and abandon all those of the past (and of the present as well) who do not meet the current shallow standard of politically correct orthodoxy can only be effectively challenged and stopped by facts in books such as this. Patriots Twice is a testament to the extraordinary character of America and Americans and solidly proves this sadly forgotten truth—those who err can change just as those who are wronged can forgive. This book is a welcome panacea for an unhappy culture of confusion and judgmentalism so sorely lacking in knowledge, patience, forgiveness, and wisdom. This book is a gift to America for now and beyond.” --  Daniel Mallock, author of NYT bestseller Agony and Eloquence: John Adams, Thomas Jefferson and a World of Revolution

“Patriots Twice is a must-read for today’s Americans who truly want to understand the critical contributions and roles of Confederate veterans and their inclusion in all aspects of the rebuilding of our nation. If the men who fought one another almost 160 years ago can come to terms, surely we can as well.” -- Gregory L. Wade, founder of the Franklin (TN) Civil War Round Table and noted Civil War author and speaker

“Leadership, courage, and fortitude were not limited to the Civil War battlefields, nor did they come to an end at Appomattox. Fortunately for America, Southern veterans worked hard to forge a bright new future for a united country. Mr. Hood has written a marvelous and insightful handbook for those wishing to educate twenty-first century Americans about the contributions of postwar Confederate soldiers.”
-- Lana J. Henley, Honorary President, Texas Division, United Daughters of the Confederacy and President, Albert Sidney Johnston 105, Texas Division, United Daughters of the Confederacy

“Patriots Twice poses the question asked so many times to former Confederate soldiers: ‘What did you do after the war?’ Stephen Hood answers that question by thoroughly researching more than 300 individuals in various fields of endeavor. The answers are going to surprise you. These veterans had a major impact on American governance, education, science, engineering, and the emergence of the United States as a world power. Patriots Twice provides an eye-opening examination of their contributions. It deserves a wide audience—especially today.” -- Joseph Ricci, Historian, Confederate Memorial Hall Museum, New Orleans

“A timely and timeless contribution to the current and on-going national discussion about the legacy and aftermath of the American Civil War in terms of the Confederacy and how it is to be interpreted in our current state of dramatic and divisive political polarization.” – Midwest Book Review

“The story of the reintegration of ex-Confederates into society is a remarkable story and Hood tells it well.” – Civil War News, review 2

“For those who would condemn these men for their allegiance to the Confederacy, any alleged racism or slavery support, open your mind. They overcame the bitterness and rancor of the war to go forward in life and contribute to our government, society, academia, etc., thereby helping to pave the way for the superpower and beacon that the United States ultimately became. This volume is recommended to the membership.” — The Journal of America’s Military Past

"A valuable addition to the bookshelves of anyone who wishes to have more context about Confederates and their accomplishments." - Journal of the Shenandoah Valley During the Civil War Era