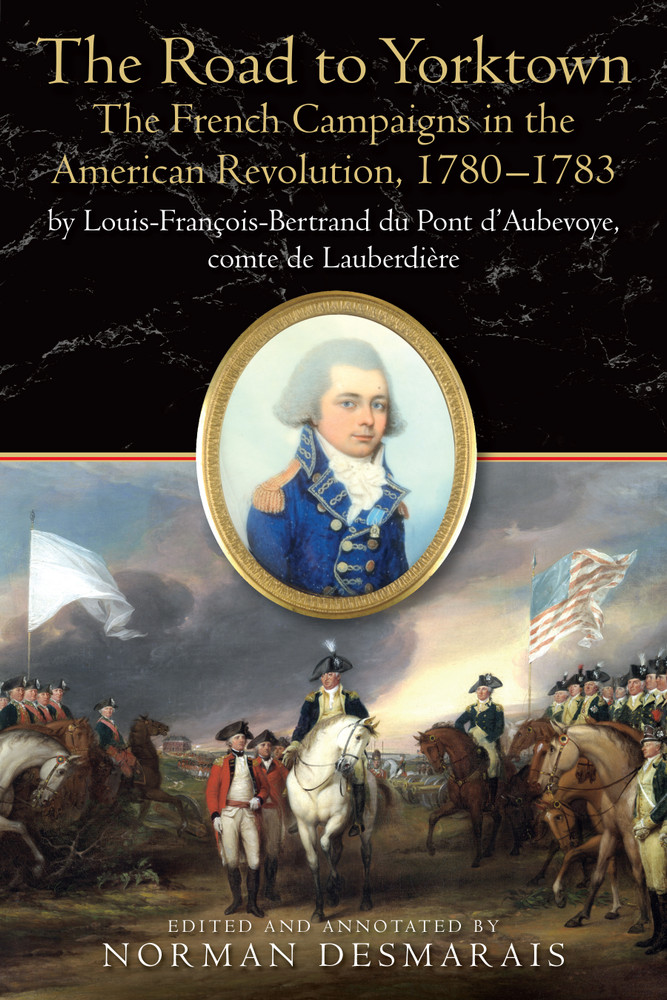 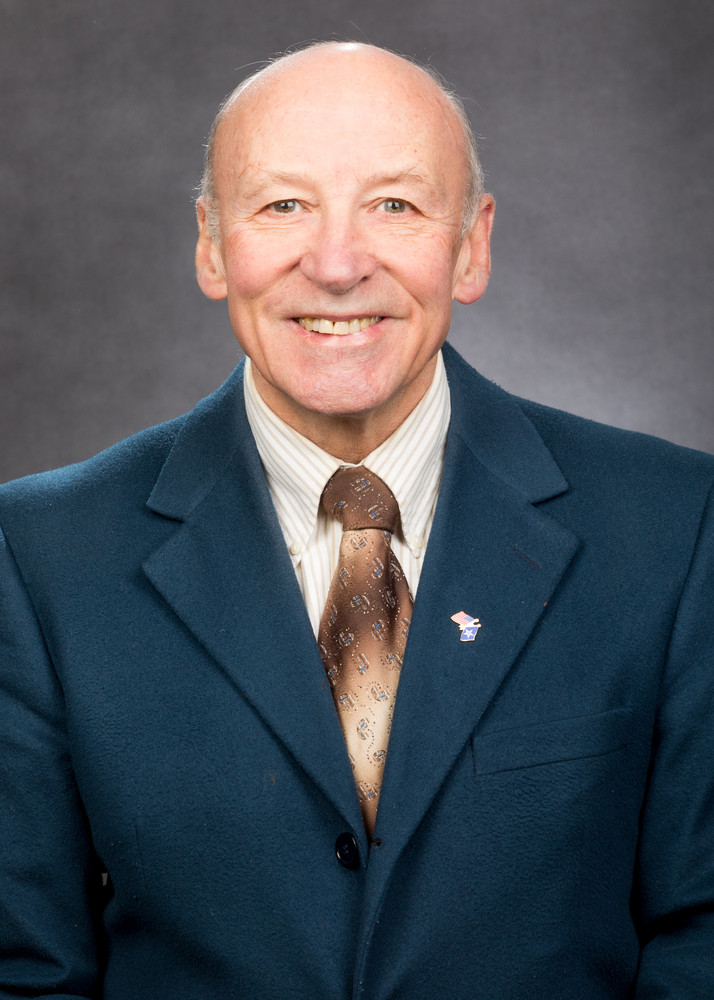 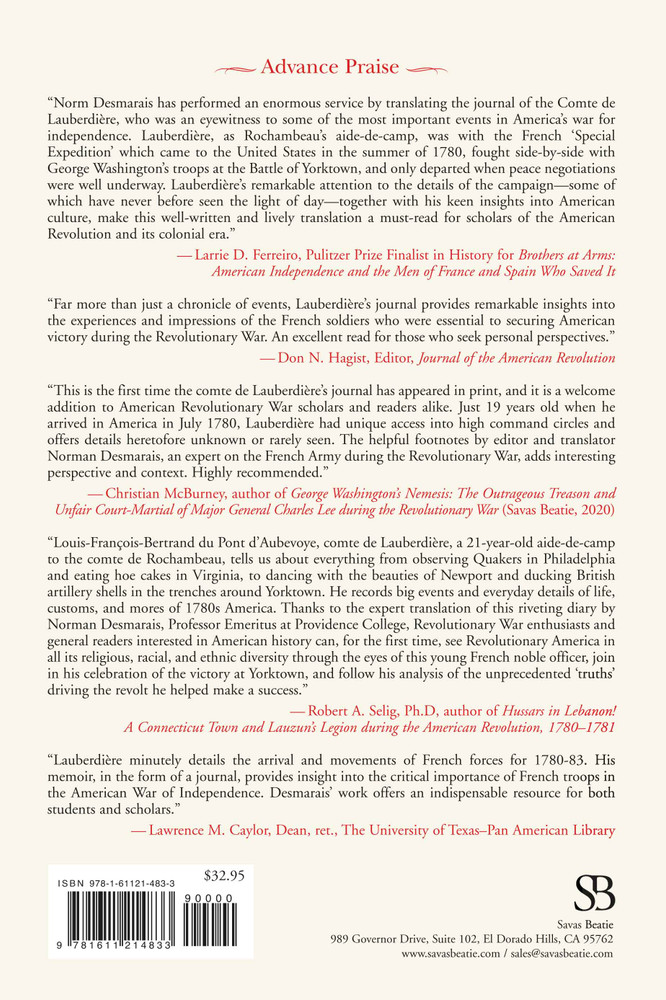 Click HERE for Table of Contents, Quotes from the Count, Introduction, and Acknowledgments

The fate of the American Revolution had yet to be decided when a remarkable 21-year-old Frenchman arrived in America. Louis-François-Bertrand, the Count of Lauberdière, belonged to an old noble family that traced its heritage back to the Crusades. His father, François-Charles-Mathieu, was musketeer of the guard of King Louis XV. More important, his uncle was General Rochambeau, the commander of all French forces in America. The Count of Lauberdière kept one of--and perhaps THE MOST--remarkable and important diaries of the entire war and it has never been published and but rarely used.

Savas Beatie is publishing  it for the first time as The Road to Yorktown: The French Campaigns in the American Revolution, 1780-1783, by Louis-François-Bertrand, comte de Lauberdière, du Pont d'Aubevoye, translated and edited by Norman Desmarais.

The young and well-educated Lauberdière served as aide-de-camp on General Rochambeau’s staff and enjoyed a unique perspective of the war. He rubbed shoulders with some of the Revolution’s most important personalities (including George Washington, Lafayette, Greene, Hamilton, and many others), and was in the epicenter of many of the war’s momentous events. His journal covers a host of topics in remarkable detail, including descriptions of the French army’s marches and camps, the long journey to Yorktown, the siege and capture that followed, and a fascinating examination of the colonial people and their distinctive early American culture. Bertrand's fascination with naval affairs is obvious, and his descriptions of the various French and English warships, battles, and fates makes for fascinating reading.

The French Count had a keen eye, and his crisp descriptions of the Army’s daily activities and movements provide a wealth of information for inquisitive readers and historians—details found only in this diary. For example, nearly all French diaries mention the army’s arrival and landing at Newport, but only Lauberdière’s identifies exactly where it occurred. Anti-French prejudices were common, and the nephew recorded how General Rochambeau dispelled them and won over the locals. Culture fascinated the young Count. He observed how the colonials attempted to imitate European manners and styles, and marveled at how quickly the citizens of Philadelphia adopted Parisian fashions. He even visited Washington’s home at Mount Vernon and made offers pointed personal comments about his wife, Martha.

Translator and editor Norm Desmarais, professor emeritus at Providence College Rhode Island, adds substantial value with his expertly crafted footnotes which, together with maps and illustrations, makes The Road to Yorktown a fresh and invigorating firsthand account that will satisfy even the most demanding student of the American Revolution.

“Norm Desmarais has performed an enormous service by translating the journal of the Comte de Lauberdière, who was an eyewitness to some of the most important events in America’s war for independence. Lauberdière, as Rochambeau’s aide-de-camp, was with the French ‘Special Expedition’ which came to the United States in the summer of 1780, fought side-by-side with George Washington’s troops at the Battle of Yorktown, and only departed when peace negotiations were well underway. Lauberdière’s remarkable attention to the details of the campaign—some of which have never before seen the light of day—together with his keen insights into American culture, make this well-written and lively translation a must-read for scholars of the American Revolution and its colonial era.”— Larrie D. Ferreiro, Pulitzer Prize Finalist in History for Brothers at Arms: American Independence and the Men of France and Spain Who Saved It

“Far more than just a chronicle of events, Lauberdière’s journal provides remarkable insights into the experiences and impressions of the French soldiers who were essential to securing American victory during the Revolutionary War. An excellent read for those who seek personal perspectives.”— Don N. Hagist, Editor, Journal of the American Revolution

“This is the first time the comte de Lauberdière’s journal has appeared in print, and it is a welcome addition to American Revolutionary War scholars and readers alike. Just 19 years old when he arrived in America in July 1780, Lauberdière had unique access into high command circles and offers details heretofore unknown or rarely seen. The helpful footnotes by editor and translator Norman Desmarais, an expert on the French Army during the Revolutionary War, adds interesting perspective and context. Highly recommended.”— Christian McBurney, author of George Washington’s Nemesis: The Outrageous Treason and Unfair Court-Martial of Major General Charles Lee during the Revolutionary War (Savas Beatie, 2020)

“Louis-François-Bertrand du Pont d’Aubevoye, comte de Lauberdière, a 21-year-old aide-de-camp to the comte de Rochambeau, tells us about everything from observing Quakers in Philadelphia and eating hoe cakes in Virginia, to dancing with the beauties of Newport and ducking British artillery shells in the trenches around Yorktown. He records big events and everyday details of life, customs, and mores of 1780s America. Thanks to the expert translation of this riveting diary by Norman Desmarais, Professor Emeritus at Providence College, Revolutionary War enthusiasts and general readers interested in American history can, for the first time, see Revolutionary America in all its religious, racial, and ethnic diversity through the eyes of this young French noble officer, join in his celebration of the victory at Yorktown, and follow his analysis of the unprecedented ‘truths’ driving the revolt he helped make a success.”— Robert A. Selig, Ph.D, author of Hussars in Lebanon! A Connecticut Town and Lauzun’s Legion during the American Revolution, 1780–1781

“Lauberdière minutely details the arrival and movements of French forces for 1780-83. His memoir, in the form of a journal, provides insight into the critical importance of French troops in the American War of Independence. Desmarais’ work offers an indispensable resource for both students and scholars.”— Lawrence M. Caylor, Dean, ret., The University of Texas–Pan American Library