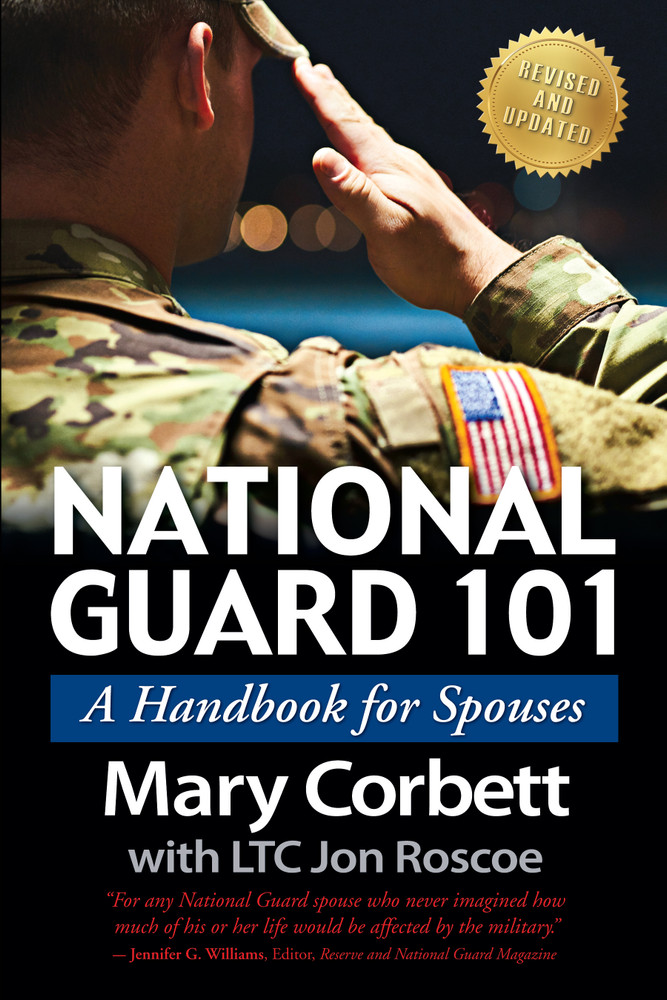 National Guard 101: A Handbook for Spouses

We offer discounts to military-related groups for bulk sales. Please click on the Contact link at the top of the page and let us know how we can help you!

“The first time I attended a National Guard family event in 1999, I felt like I had been abducted by aliens!” recalls Mary Corbett, author of National Guard 101: A Handbook for Spouses. “I didn’t understand anything! I had never been in an armory before. I didn’t know the difference between an officer and an enlisted soldier. I didn’t even know how to address the commander or his wife!”

Corbett decided to “wing it,” rationalizing that since her husband was “just” a Guardsman she wasn’t a “real” military wife. After all, military spouses lived on bases, operated within a strict structure of rank, and dealt with long deployments. Thank goodness she didn’t have to worry about those things! Of course, she could have never guessed, and neither could anyone else, that in less than two years, four hijacked airliners would forever alter the purpose and public profile of National Guard soldiers and those who love them forever. On September 11th, 2001, Corbett became a military wife. But, as she realized later, she had always been one.

Written in a lively and informal style, National Guard 101: A Handbook for Spouses demystifies the Guard’s unique hybrid civilian-military lifestyle. It is a must-read book for every National Guard family member. Corbett’s book covers a broad range of topics--from the history of the National Guard and understanding rank to Guard social life and Family Programs. Corbett also details the benefits and assistance resources available to Guard families and guides readers through the process of setting up a Personal Assistance League (PAL) to provide support during both short and long-term deployments.

Ten years after National Guard 101’s original publication, National Guard spouses are still “holding down the fort.” In fact, in 2020, more National Guard troops were activated than any time since World War II due to the COVID-19 pandemic, wildfires, and civil unrest. Year after year, the National Guard evolves to meet different threat environments. What doesn’t change is the vital role that family members play in supporting soldiers.

About the Author: Mary Corbett is a professional writer and military wife. She has appeared on The Today Show, Fox News Channel, local television affiliates, and nationally syndicated radio programs. Her first book, The List, was published in 2006 and National Guard 101 has had numerous printings. Mary and her husband and co-author, LTC Jon Roscoe, live in Alpharetta, Georgia.

"Mary Corbett manages to break down the information Guard spouses need to know in a straightforward but fun way. For any National Guard spouse who never imagined how much of his or her life would be affected by the military." (Jennifer G. Williams, Editor, Reserve and National Guard Magazine)

"National Guard 101 is more than just a helpful handbook for spouses. It's a go-to guide for anyone new to the Guard's portion of the profession of arms, even those in uniform." (MG Gus L. Hargett Jr. (Ret.), President, National Guard Association of the United States)

Mary Corbett is a professional writer and National Guard wife. She has appeared on The Today Show, Fox News Channel, local television affiliates, and nationally syndicated radio. Her first book, The List: 7 Ways to Tell if He’s Going to Marry You in 30 Days or Less was published in 2005. Corbett lives in Alpharetta, Georgia, with her husband Major Jon Roscoe, ARNG, and their children Holly and William. Visit her website www.marycorbett.com.